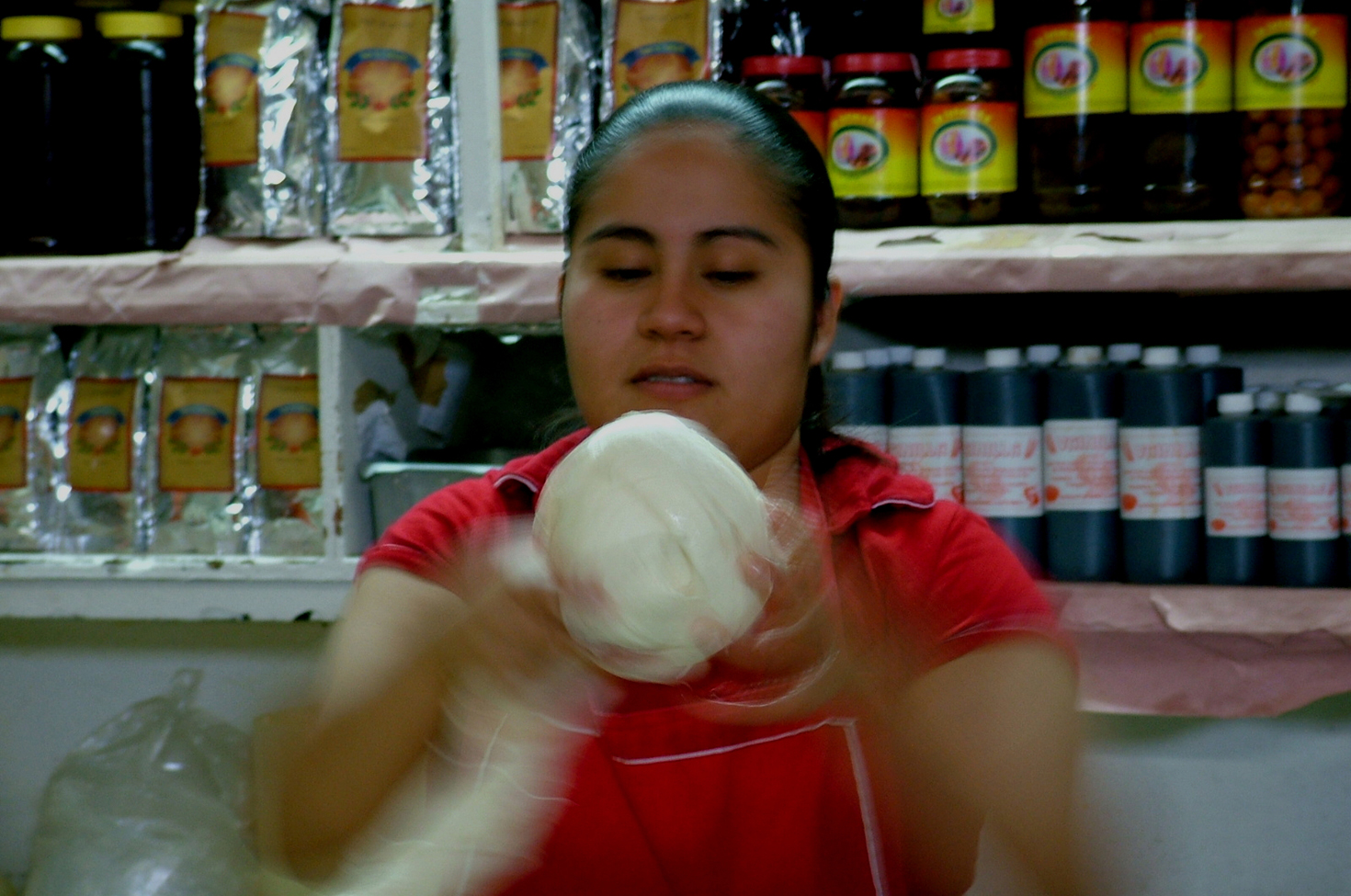 In 1885, as the story goes, in the small town of Reyes Etla, the cheese-making parents of Leobarda Castellanos García left their fourteen-year-old daughter in charge of the curds while they went to market. Fortunately, teenagers back then were just as distracted as their twenty-first-century counterparts, and Leobarda belatedly realized she had let the milk curdle too long.

Fearing retribution, she did what any self-respecting teenager would do and tried to hide the mishap from her parents by tossing boiling water into the mix. It didn’t work. Instead of the crumbly queso fresco that her family produced, the attempted fix resulted in a gumlike cheese (“gummy” doesn’t exactly fit the Mexican Spanish word chicloso) that was sure to be Leobarda’s doom.

Luckily for her (and the rest of us), when her parents got home and tried her creation, approbation rather than castigation was in order. The cheese had a tart kick that was not unpleasant. The parents García saw an opportunity. They set to tinkering with the process, experimenting with curdle times and temperatures to find the perfect conditions to reenact their daughter’s blunder and dedicating barrel after barrel of milk to their research. The gambit paid off. Quesillo, that stringy, tangy Mexican cheese that melts perfectly right on the griddle, was born.

Just like Popsicles, which came into existence when eleven-year-old Frank Epperson left a cup of soda with a stick in it on his front porch overnight, and Nashville hot chicken (hell hath no poultry like a woman scorned), quesillo is a product of forgetfulness, desperation, improvisation, and a generous helping of luck. And like those and many other alimentary accidents that now live on in the culinary canon, quesillo has taken a hallowed place among the symbols Oaxacans use to define themselves. “Oaxacan quesillo,” wrote author Laura González in the Oaxaca-based magazine Culturismo, “is without a doubt one of the [region’s] products that, because of its exquisite flavor, maintains worldwide renown.”

In addition to the fame of its zest, the cheese, or at least the idea of it, has great economic value inside and outside the place where it was born. González interviewed a contemporary cheese maker (also named Castellanos) who cited the challenges he faces in both domestic and international markets, as he finds his product competing with cheaper cheeses full of additives and backed by gargantuan marketing systems.

Quesillo has more or less become the de facto cheese for quesadillas, tacos, enchiladas, and other melty antojitos1 in Mexico. Its omnipresence and economic potential has made it an inevitable catalyst for battles concerning intellectual property, nomenclature, and the veracity of its origin story.

The exonymic term queso Oaxaca is more commonly heard in markets and street stalls outside of Oaxaca and the neighboring state of Puebla, whose citizens also claim ownership of the cheese’s creation. Puebla produces more commercial quesillo than Oaxaca; this output has driven poblano dairy farmers and cheesemakers to decry the story of Leobarda Castellanos García, claiming that she is as mythical a creature as the giant bicephalous eagles of Mixtec lore. They cite a lack of evidence for the Oaxaca-based origin myth. On that point they have ground to stand on. Just like the Flechador del Sol, the legendary Mixtec warrior who wounded the western sun with an arrow, causing it to bleed red down the hills of La Mixteca and conquering the land for his people,2 the only proof for Leobarda’s accident comes from oral tradition. If Grandma says it happened, the argument goes, who are we to question?

Without a fun origin story of their own to justify their claim, poblanos resort to the argument that Oaxaca produces little milk itself, sourcing the majority from Puebla and Veracruz. However, the same is true for Oaxacan chocolate (most of the raw cacao comes from Veracruz and Tabasco, the latter of which produces so much that its citizens are nicknamed chocos), and no one refutes the state’s proprietary claim to its delectable and distinctive recipe. Following the poblano logic, some Depression-era Tennessean poultry farmer, rather than the deceived woman who cooked a bird in hellfire to take revenge on her two-timing boyfriend, would be the one responsible for the invention of Nashville hot chicken. Although the World Intellectual Property Organization considers production of the raw material a factor when bestowing the protections of geographical indication and appellation of origin, for Oaxacan cheese makers, it takes a more cogent (and interesting) argument than “we have more cows than you” to lay claim to a national icon and the profits it generates.

In 2014, Oaxacan dairy farmers and producers filed a legal complaint with the Mexican Institute of Industrial Property,3 petitioning for the official designation of quesillo as a Oaxacan product. The grievance was more than petty squabbling over ownership of the foodstuff’s creation or an attempt to gain bragging rights in a long-standing state rivalry. The IMPI has heard and granted protections in similar cases regarding mole, coffee, and mezcal. The Oaxacan dairy farmers denounced what they called the intellectual property theft of quesillo by Mexico-based transnational corporations, and cited fears that global giant Nestlé had designs on doing the same.4 The theft is of the idea of the cheese rather than its actual recipe. A cheaper, mass-produced “quesillo” pumped full of powdered proteins, moisture retainers, preservatives, and artificial flavors undercuts the prices artisanal cheesemakers need to make a living. In a place like Oaxaca, in which entire towns devote themselves to producing one commodity (in Reyes Etla, over 90 percent of families make quesillo), this can have devastating consequences. A 2016 study by the Autonomous University of Chapingo, in Mexico State, found that 97 percent of the quesillo produced in Oaxaca was made by small family or home-based companies. Leobarda’s story has become crucial not only to Oaxacans’ sense of cultural identity but also to their earning capacities. The university study also found that many of these families were fleeing the cheese-making business for more viable economic opportunities. A WIPO designation of geographical indication would offer protection against this competitive imbalance. 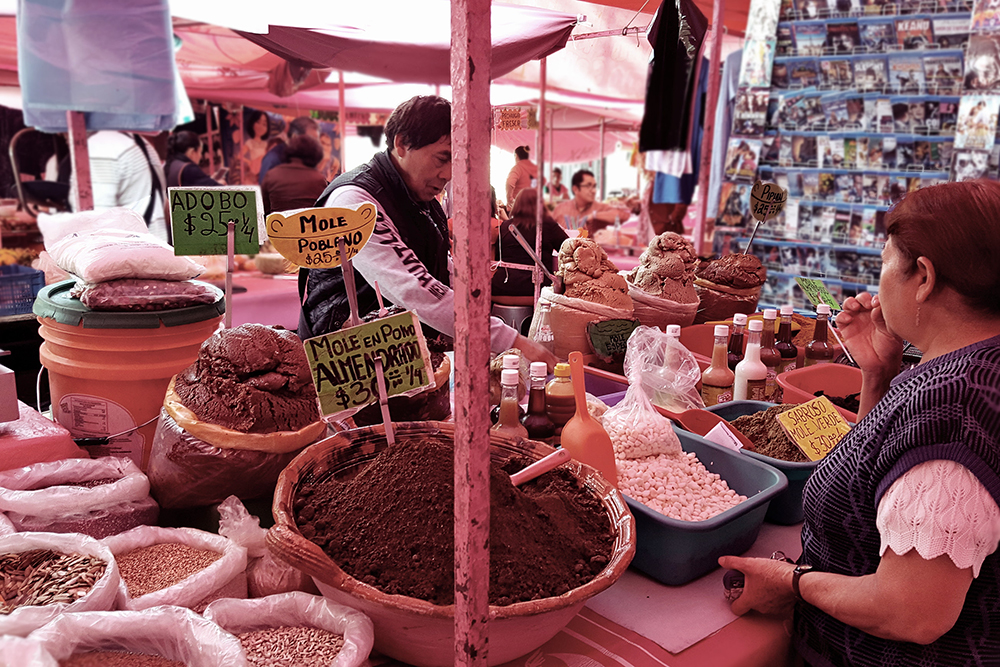 This imbalance and theft of ideas isn’t a new problem for the indigenous peoples of Mexico. In his General History of the Things of New Spain, sixteenth-century Florentine friar Bernardino de Sahagún was the first historian to document the pre-Hispanic sauce called chilmulli, served in rituals honoring the Aztec emperor Moctezuma. Despite this evidence, a number of kitchen-accident stories have circulated among those who called Mexico New Spain. Some have attempted to put the origins of mole in colonial convents in Puebla. Imposition of the Spanish diet on the indigenous peoples of Mexico was as much an element of conquest as the spread of Catholicism, but fortunately it wasn’t as successful. Unable to snuff out the chili peppers, beans, and cornmeal of pre-Hispanic Mexico, the colonizers figured they would lay claim to this cultural capital, an act that transposed the history of one place into political and economic power for another. The new corporate colonialism of Nestlé and other multinational food conglomerates is simply a new iteration of conquest.

Due to the fact that the vast majority of the milk to make Oaxacan quesillo comes from outside the state, the product is ineligible for a status of appellation of origin. Official recognition of the story of Leobarda’s error as the cheese’s beginnings would, however, justify a WIPO designation of geographical indication. Citizens of Reyes Etla may not have documentation to back up their story, but they do have proof of the cheese’s genesis in Oaxaca. Shipping receipts from the 1890s held by the Museo del Ferrocarril Mexicano del Sur in Oaxaca City show quesillo moving west from Oaxaca to Puebla and Mexico City, not the other way around. Oaxacan cheese makers have no other way to substantiate their claim to quesillo besides these yellowed bills of sale, but the story of Leobarda lives on in factories and homes where it is made. That is proof enough for them.

It is also reason to continue practicing cheese-making methods that value flavor and tradition over sales. “We are committed to maintaining the quality of our products,” said a possible descendant of Leobarda Castellanos interviewed by González, “and that is the best and strongest calling card for our quesillo.”

As of the time of this writing, quesillo still lacks WIPO protection. Inquiries made to the IMPI as to why Leobarda’s story was not recognized in the case brought in 2014 have gone unanswered. Neither has Nestlé brought to market a version of the cheese. Tang-less and nowhere-near-creamy-enough versions of queso oaxaca are regardless still being exported by Mexico-based multinationals Lala and Fud, among others. The IMPI and the WIPO have already bestowed economic protections on the agave distillate mezcal, awarding it and the state of Oaxaca with an appellation of origin in 1994. The Oaxacan mezcal industry is enjoying an economic boom driven by both tourism and exportation; producers overshadowed by big brands before artisanal producers had the protection of the WIPO appellation are now expanding their business models into the hotel and restaurant sectors. It is unlikely that a brand of cheese would become popular enough to warrant a themed hotel (though if it were to happen, it would happen in Oaxaca), but a geographical indication designation would certainly benefit small quesillo producers, as it obviously did mezcal makers.

It would also benefit cheese eaters. The deep personal and cultural connections that Oaxacan makers of quesillo feel toward their final product results in better cheese, and anything that enhances their ability to sell it means more of it for everyone else. The key to unlocking this economic potential for quesillo lies nearly a century and a half in the past. Considering the abundance of popular foods born out of chance,5 it’s easy to believe Leobarda’s story. The livelihoods of her descendants—and an important facet of how her home state represents itself to the world—depend on whether those with economic power want to call her blunder history or hearsay.

1 Basically everything the world outside of Mexico knows as “Mexican food” is merely the tip of the gastronomical iceberg. Plain old chicken soup is as much a staple in Mexico as it is in the U.S., it’s just not exotic enough for Tex-Mex menus. Down here, tacos et al. are called antojitos, which means more snack than meal. Ritualistic practices like placing agave points in the form of a cross into the earthen barbacoa oven to ward off the mal de ojo (evil eye) during the eight-hour roast, and recipes with the laundry list of ingredients that go into a piquant mole chichilo, which includes ground-up, burnt-to-a-crisp corn tortillas, testify to the breadth of complexity and imagination of Mexican cooking. ↩

2 Watch a sunset here and you might second-guess the fiction in the tale. ↩

3 The national organization that petitions the WIPO for the aforementioned market protections. ↩

4 Nestlé has already “stolen” the recipes for mole and Oaxacan chocolate, slapping a white abuelita—who could just as believably be holding a cup of English tea—onto a label and calling it authentic. Leobarda and her family were most likely of a pale complexion, but mole and chocolate were definitely cooked up by brown-skinned hometown chefs. ↩

Cody Copeland is a freelance writer based in Mexico City. His work has appeared in the Texas Observer, Mexico City Lit, and the Rio Grande Review. He is also the author of the latest edition of Moon Oaxaca, set to be published in 2020.