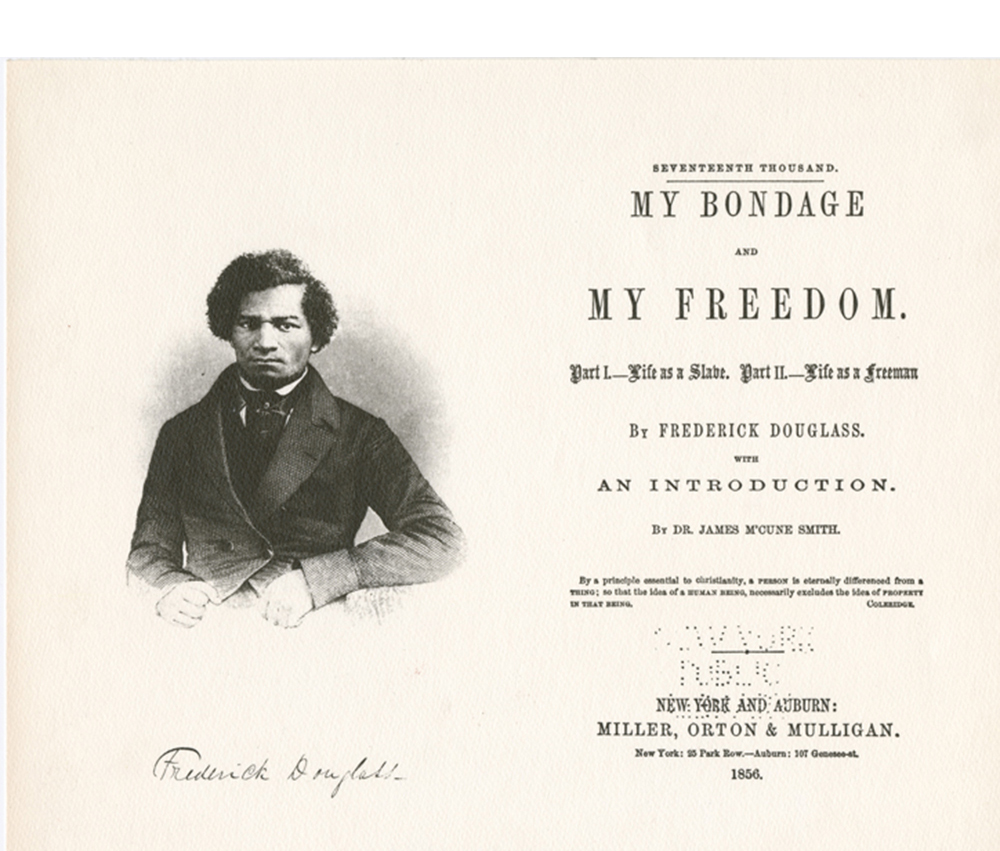 Portrait of Frederick Douglass from frontispiece and title page of his book My Bondage and My Freedom, 1856. New York Public Library, The Miriam and Ira D. Wallach Division of Art, Prints and Photographs: Print Collection.

• The land surveys that defined (and still define) American space: “Though it’s taken for granted today, the systematic division of land in the United States still defines the country’s geographical fate. In its early stages, the survey pit Thomas Jefferson and Alexander Hamilton against one another, with their competing visions of who should own and profit from America’s land, and it enabled America’s great land grab from the native people of the continent’s Western reaches. More than 230 years later, the same system still governs distributions of mineral rights on public lands and underlies digital mapping systems. If you know what to look for, you can still find its legacy in the physical markers that dot the land today, in the neat divisions of the Western states, and particularly in Ohio, where a not-yet-perfected survey system created messy, irregular divisions that still hash the state.” (Atlas Obscura)

• Turns out the real Mr. Darcy was markedly less handsome than his television portrayals might suggest. (New York Times)

• This year, why not try sending a Vinegar Valentine? “The artwork and verse typically mocked some characteristic of the recipient. Gluttons, drinkers, hen-pecked husbands, braggarts, windbags, spinsters, sharp-tongued wives, unfaithful lovers, cowards, lazy colleagues, uncaring bosses, ugly people, fat and thin people, vain people, and stupid people—they were all fair game to folks who posted vinegar valentines. They could be delivered to enemies, or people who had treated you badly, or someone you thought needed to be brought down a notch or two. The tone of verse ranged from gentle to downright vicious and abusive.” (AbeBooks)

• Frederick Douglass’ quest to challenge racist imagery led him to become the most photographed American of the nineteenth century. (Hyperallergic)

• Revisiting John Ruskin: “Given his relative obscurity today, it’s hard for contemporary readers to grasp how famous Ruskin once was. Reverently read and reflexively quoted, his pronouncements on everything from painting to poetry to private capital rang among his fans with an almost scriptural authority. His mother had once longed for him to be a bishop, and as an arbiter of his society’s standards, Ruskin, in his own way, came close. ‘Taste…is the only morality…Tell me what you like,’ Ruskin asserted, ‘And I’ll tell you what you are.’” (Humanities)

• Lifestyle advice from the likes of Mabel Normand and Mary Pickford. (JSTOR Daily)