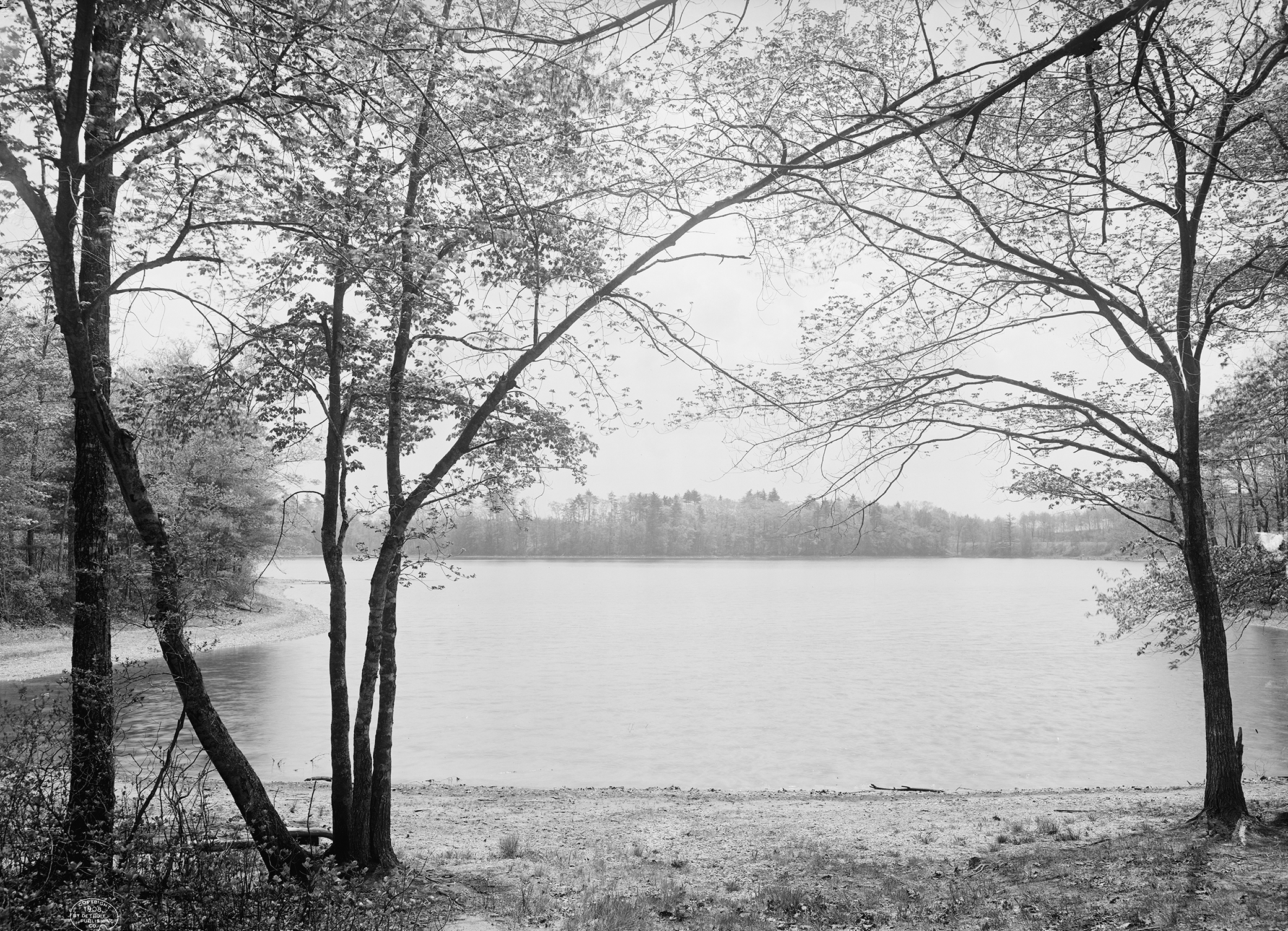 Ralph Waldo Emerson and Henry David Thoreau would take long walks together, boat on the river, have discussions alone or with others in Emerson’s circle in Emerson’s study or around the dinner table with family. On October 22, 1837, during one of their many exchanges, Emerson tried to think of people who kept journals. He could only name the French essayist Michel de Montaigne, his neighbor Amos Bronson Alcott, his aunt Mary Moody Emerson, and himself. “Beside these,” he wrote the next day, “I did not last night think of another.” It was at this time that he asked Thoreau the question that became the first entry in Thoreau’s journal: “ ‘What are you doing now?’ he asked. ‘Do you keep a journal?’ So I make my first entry today.”

The journal, for both writers, was an integral part of their process. Thoreau’s journal contains around two million words, Emerson’s over three million. For both men, journals were the work of a lifetime but not their life’s work. They laid the groundwork for the lectures and essays and books that were to follow. When Thoreau and Emerson combed their journals for material, it mattered little when, where, or even what circumstance had prompted an entry, as long as the text reflected the theme of what they were currently writing. “It is surely foolish,” Emerson expressed in his journal, “to adhere rigidly to the order of time in putting down one’s thoughts, and to neglect the order of thought. I put like things together.”

Emerson considered his journal his “Savings Bank. I grow richer because I have somewhere to deposit my earnings; and fractions are worth more to me because corresponding fractions are waiting here that shall be made integers by their addition.” It was similar for Thoreau. “Each thought that is welcomed and recorded is a nest egg,” he wrote, “by the side of which more will be laid. Thoughts accidentally thrown together become a frame in which more may be developed and exhibited. Perhaps this is the main value of a habit of writing, of keeping a journal,—that so we remember our best hours and stimulate ourselves.” 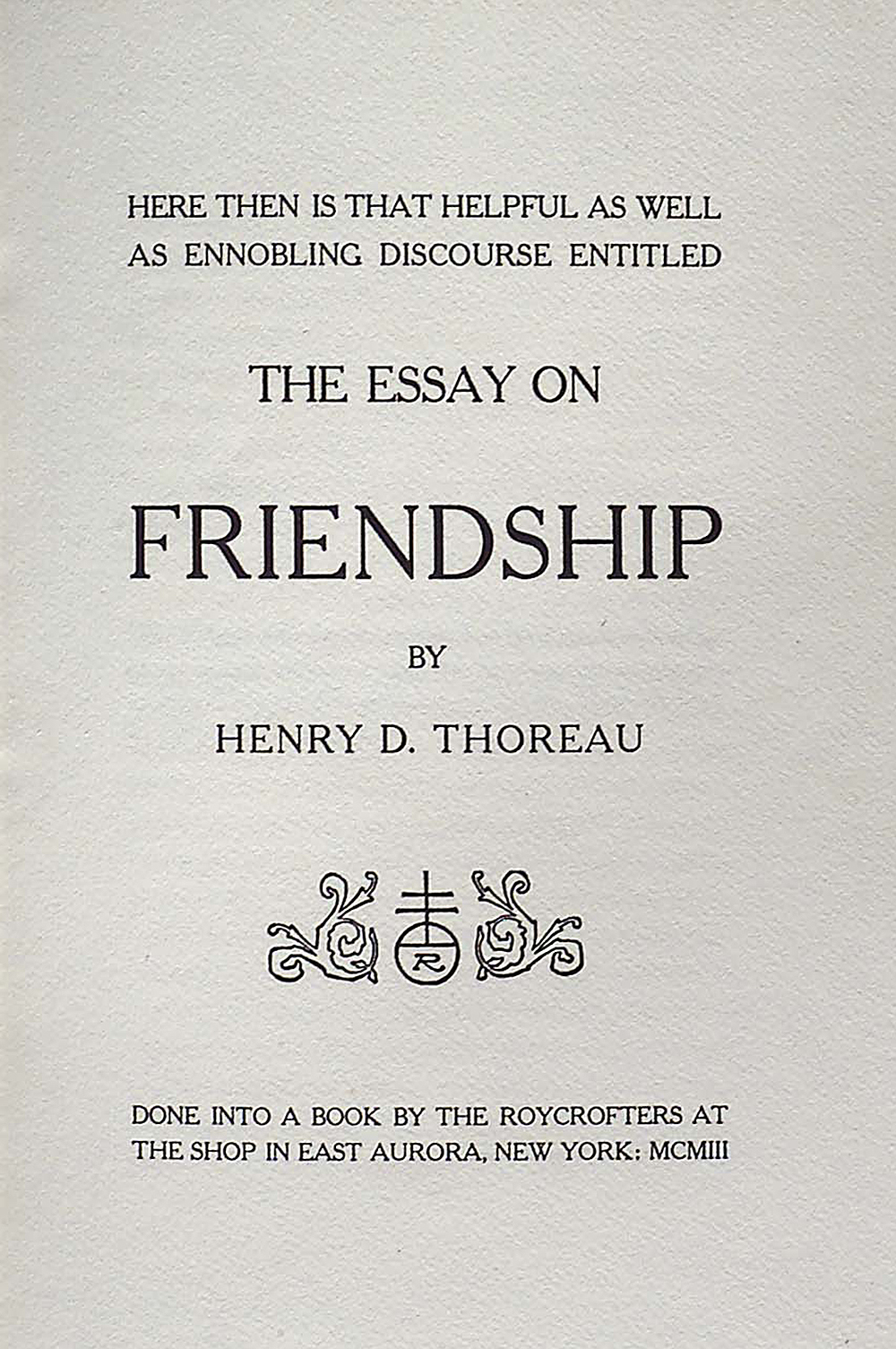 Their work habits, however, were quite different. Emerson wrote that Thoreau “knew but one secret, which was to do one thing at a time, and though he has his evenings for study, if he was in the day inventing machines for sawing his plumbago, he invents wheels all the evening and night also; and if this week he has some good reading and thoughts before him, his brain runs on that all day, whilst pencils pass through his hands.” Emerson found in himself “an opposite facility or perversity, that I never seem well to do a particular work until another is due. I cannot write the poem, though you give me a week, but if I promise to read a lecture the day after tomorrow, at once the poem comes into my head and now the rhymes will flow. And let the proofs of the Dial be crowding on me from the printer, and I am full of faculty how to make the lecture.”

In December 1837 Emerson shared a discovery with Thoreau. The previous year he had “found a new musical instrument which I call the ice-harp. A thin coat of ice covered a part of the pond, but melted around the edge of the shore. I threw a stone upon the ice which rebounded with a shrill sound, and falling again and again, repeated the note with pleasing modulation. I thought at first it was the ‘peep, peep’ of a bird I had scared. I was so taken with the music that I threw down my stick and spent twenty minutes in throwing stones single or in handfuls on this crystal drum.” “My friend tells me,” Thoreau wrote, “he has discovered a new note in nature, which he calls the Ice-Harp.” 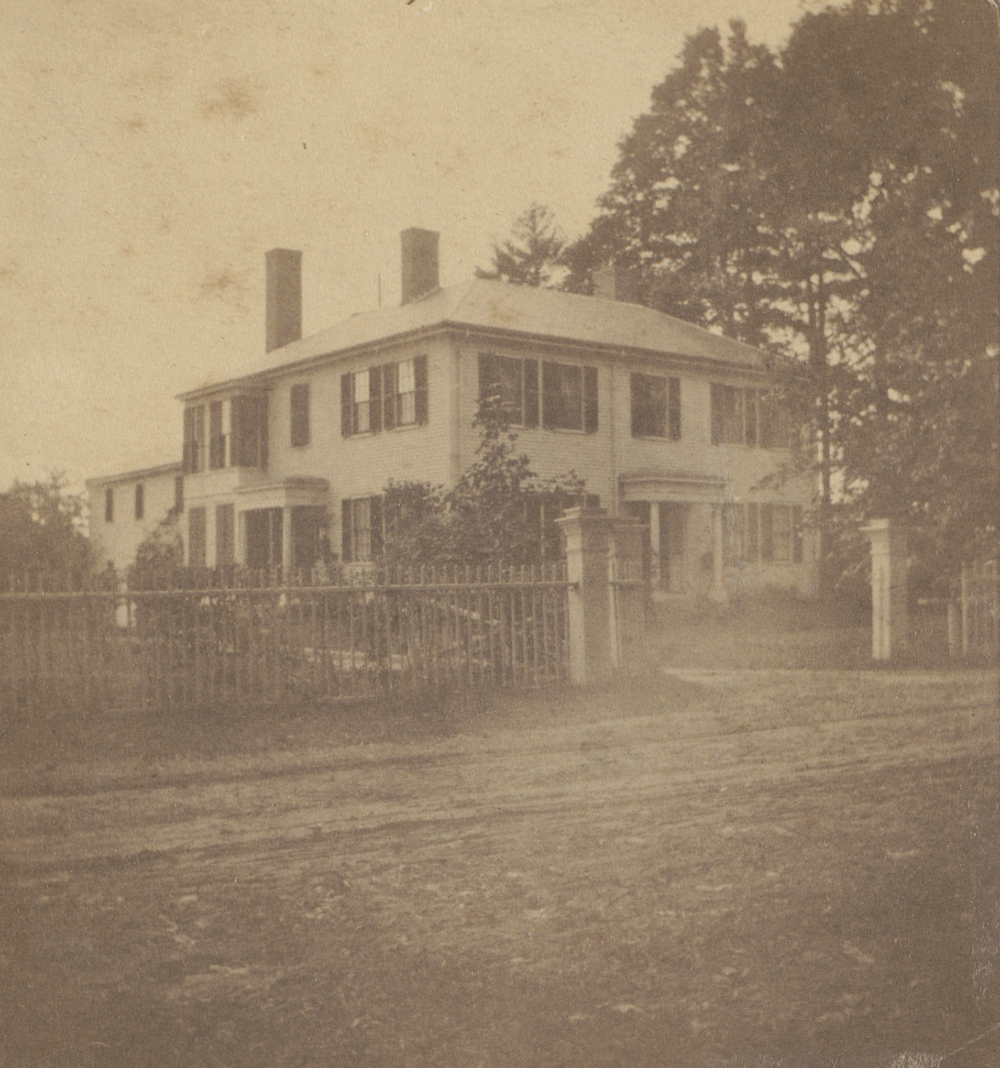 In the following spring Thoreau described their friendship.

Two sturdy oaks I mean, which side by side
Withstand the winter’s storm,
And, spite of wind and tide,
Grow up the meadow’s pride,
For both are strong.

Above they barely touch, but, undermined
Down to their deepest source,
Admiring you shall find
Their roots are intertwined Insep’rably.

Comments about Emerson began to appear in Thoreau’s journal, but Emerson’s journal began to hold statements and stories by Thoreau, some of which Thoreau would include later in his own writings, such as the “good story” Emerson noted in September 1838 about Deacon Parkman, “who lived in the house he now occupies, and kept a store close by. He hung out a salt fish for a sign, and it hung so long and grew so hard, black and deformed, that the deacon forgot what thing it was, and nobody in town knew, but being examined chemically it proved to be salt fish. But duly every morning the deacon hung it on its peg.” A decade later this story would be incorporated into Walden.

“My good Henry Thoreau made this else solitary afternoon sunny with his simplicity and clear perception,” Emerson wrote in 1838, part of which he would later incorporate into his essay on “New England Reformers.”

How comic is simplicity in this double-dealing, quacking world. Everything that boy says makes merry with society, though nothing can be graver than his meaning. I told him he should write out the history of his college life, as Carlyle has his tutoring. We agreed that the seeing the stars through a telescope would be worth all the astronomical lectures. Then he described Mr. Quimby’s electrical lecture here, and the experiment of the shock, and added that “college corporations are very blind to the fact that the twinge in the elbow is worth all the lecturing.”

“Montaigne is spiced throughout with rebellion,” Emerson wrote, “as much as Alcott or my young Henry Thoreau.” It was an aspect of Thoreau’s personality that intrigued him as much as it at times exasperated him. In a letter to Margaret Fuller in early 1839, Emerson referred to Thoreau as “my protestor,” an idea he’d expressed in a recent lecture, “The Protest,” in which he made several direct references to ideas born of their conversations. The young who “alone have dominion of the world, for they walk in it with a free step,” and the “impatient youth” who is “galled…by the first infractions of his right,” came from a walk to Walden Pond the previous November during which Thoreau

complained of the proprietors who compelled him, to whom, as much as to any, the whole world belonged, to walk in a strip of road and crowded him out of all the rest of God’s earth. He must not get over the fence: but to the building of that fence he was no party. Suppose, he said, some great proprietor, before he was born, had bought up the whole globe. So he had been hustled out of nature. Not having been privy to any of these arrangements, he does not feel called on to consent to them, and so cuts fishpoles in the woods without asking who has a better title to the wood than he.

On the last day of August 1839, Thoreau and his brother, John, made a two-week river excursion from Concord, Massachusetts, to Concord, New Hampshire. Emerson applauded the two brothers with approbation tinged with wistfulness after they returned from their excursion: “Now here are my wise young neighbors who, instead of getting, like the wordmen, into a railroad-car, where they have not even the activity of holding the reins, have got into a boat which they have built with their own hands, with sails which they have contrived to serve as a tent by night, and gone up the Merrimack to live by their wits on the fish of the stream and the berries of the wood.”

Later that month Emerson wrote his brother William that George Ripley and others were reviving “at this time the old project of a new journal”—what would become The Dial: A Magazine for Literature, Philosophy, and Religion—“for the exposition of absolute truth, but I doubt a little if it reach the day,” insisting, with a sweep of self-deception, that he “will never be editor, though I am counted on as a contributor.” As he told Margaret Fuller, “I believe we all feel much alike in regard to this Journal; we all wish it to be, but do not wish to be in any way personally responsible for it.” 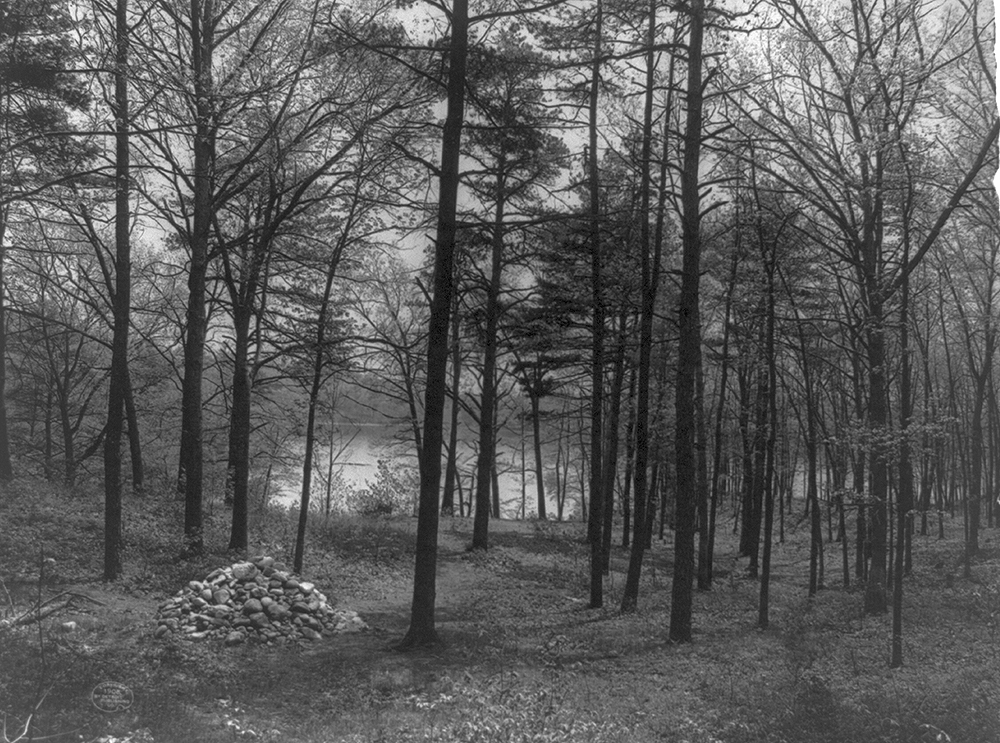 The Dial would also serve as a receptacle for the writings of those Emerson wanted to help and whose work he might want to promote. He knew, however, the limitations of the “fine people” who would write for this journal and whose work would appear “nowhere else,” but in Thoreau he saw a different potential: “My Henry Thoreau will be a great poet for such a company, and one of these days for all companies.” He saw Thoreau as a contributor, providing him with an outlet for his early writings, and later, when Emerson did become editor, as an apprentice, positioning Thoreau as his assistant.

Margaret Fuller was The Dial ’s first editor, and Emerson tried to encourage her about Thoreau’s work, though eventually needing to concede, “I do not like his piece very well, but I admire this perennial threatening attitude, just as we like to go under an overhanging precipice,” he wrote her in early 1842. The majority of Thoreau’s Dial contributions would not be published until Emerson took on the editorship, at which point his friend’s work had some, although a very limited, distribution.

In the spring of 1840 Emerson had been working on pieces that would form his first series of Essays. In June he was finishing up his essay on friendship, which he would place in the center of his book, as Thoreau would do when placing his own friendship essay in A Week on the Concord and Merrimack Rivers. Emerson’s essay contains the realization with which he wrestled his entire life: “Friends such as we desire are dreams and fables.”

Jeffrey S. Cramer is the author of Solid Seasons: The Friendship of Henry David Thoreau and Ralph Waldo Emerson and the editor of Walden: A Fully Annotated Edition, winner of a 2004 National Outdoor Book Award, and The Quotable Thoreau, recipient of an Umhoefer Prize for Achievement in Humanities. In 2017, Cramer was the historical consultant for the Ken Burns–produced documentary Walden, created for the Walden Pond State Reservation during the Thoreau Bicentennial. He is the curator of collections at the Walden Woods Project’s Thoreau Institute Library.