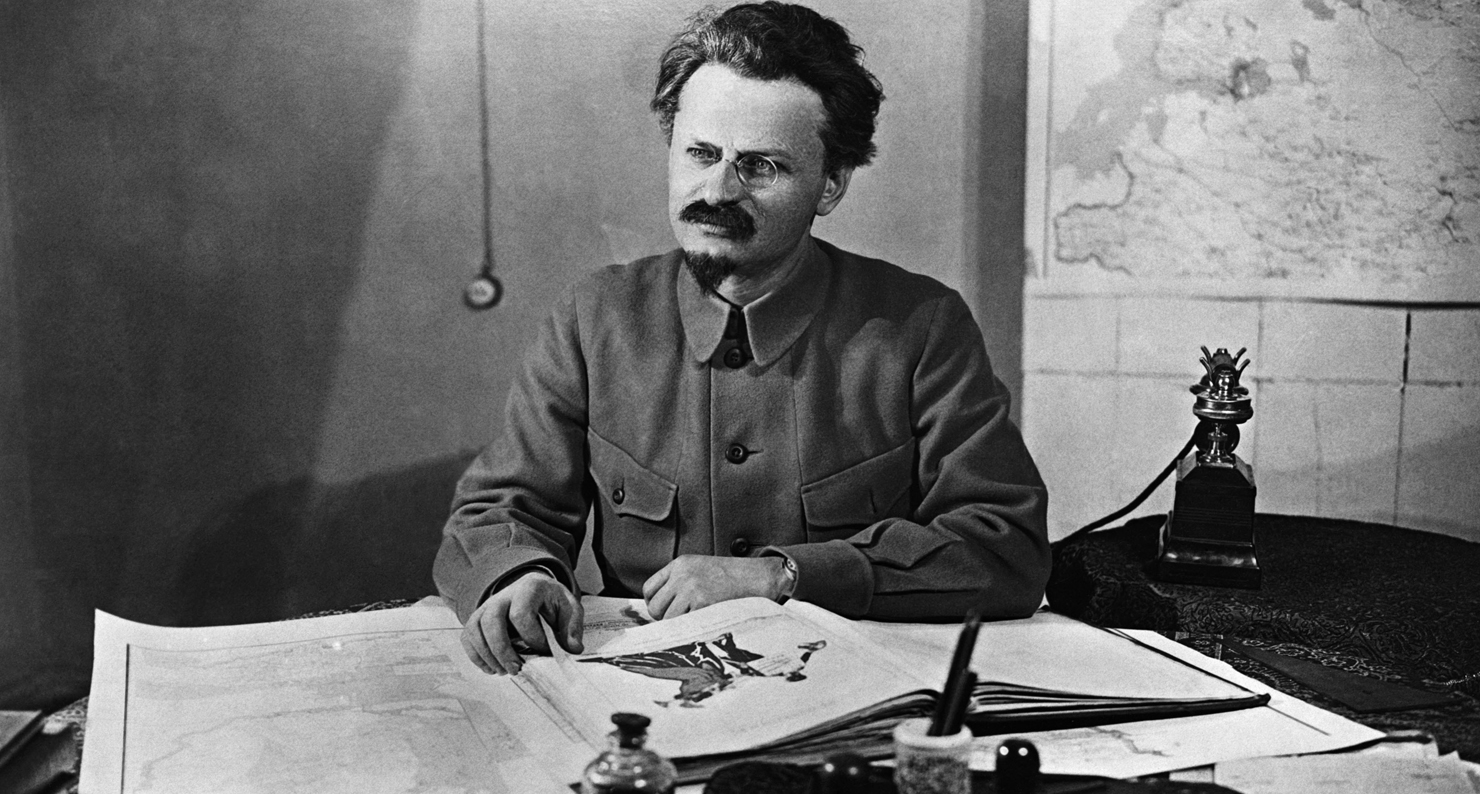 In 1917, Russia shuddered its way through not one, but two revolutions: the February Revolution ended three centuries of rule by the Romanov dynasty, and the October Revolution brought the Bolshevik Party to power, planting the seeds of the Soviet state. Socialist firebrand Leon Trotsky took a leading role in that year’s Russian drama—as he would do in subsequent years. But even close readers of history could be forgiven for not knowing what happened to Trotsky in the months between February and October, how he began that spring living in the Bronx and ended it as a prisoner in a Canadian concentration camp. More than a bizarre detour from epic events to come, Trotsky’s detention and release played a vital part in the development of tools and strategies for modern revolutions.

By the time strikes paralyzed Russia and threatened the tsar’s rule in the first weeks of 1917, Trotsky had been living in exile for years due to his political agitation. After wearing out his welcome in Austria, France, and Spain, he left Europe for America at the end of 1916. Taking up residence in an apartment filled with modern conveniences, he wrote first for the Yiddish-language dailyForverts and then for Novy Mir, a Russian Socialist newspaper with offices in the East Village on St. Mark’s Place.

Like many of his fellow revolutionaries, Trotsky had given up hope of imminent upheaval in Russia; he was stunned to read of the events in his homeland that February. With the abdication of Nicholas II, the political moment he had worked for across two decades had unexpectedly taken place without him, spurring him to return home immediately to help shape Russia’s political future. He wrote in his autobiography:

When I telephoned my wife from the newspaper office that Petrograd was in the midst of revolution, the younger boy was in bed with diphtheria. He was nine years old, but he realized definitely—and had for a long time—that revolution meant an amnesty, a return to Russia and a thousand other blessings. He jumped to his feet and danced on the bed in honor of the revolution. It was a sign of his recovery.

Booking tickets on the Norwegian liner Kristianiafjord, Trotsky made it out of the Port of New York City with his family, but the ship didn’t carry them across the Atlantic. Instead, British officers pulled Trotsky’s family and five other passengers suspected to be revolutionaries off the boat. Though the Great War was underway, and political radicals were considered dangerous, Trotsky and company weren’t subjects of an enemy nation. They were citizens of Russia, a country allied with the British war effort. No arrest papers were produced; technically, there were no grounds to detain them. In the chapter of his autobiography titled “In a Concentration Camp,” Trotsky later described the scene in which he was roughed up and then fingerprinted by the detectives as his son’s “first lesson in British democracy.”

Trotsky’s family remained in Halifax, while he and the other men ended up at Amherst, a prisoner-of-war camp for Germans captured at sea and concentration camp for civilians arrested in Canada at the start of the war. At the time, the term “concentration camp” covered a variety of housing designed to detain civilians in wartime. By the close of the Great War, dozens of countries and colonial outposts held citizens of nations with whom they were at war, civilians not imprisoned for anything they had done but for the fear of what they might do, from spying to sabotage. Germany interned more than a hundred thousand Russian, French, and British subjects. Great Britain and France interned several times that many Germans, Hungarians, and Austrians—many in locations as far away as New Zealand, Hong Kong, and Haiti.

These wartime internment camps had their hardships and abuses but existed in a separate universe from the Nazi forced labor and extermination evoked today by the words “concentration camp.” The internment in which Trotsky found himself was nearly as distant from the brutal concentration camps that preceded the war, established near the turn of the century by imperial powers to break the will of guerrilla forces in Cuba, southern Africa, and the Philippines.

During his month in Nova Scotia, Trotsky slept with hundreds of prisoners in an open room of a decommissioned iron foundry. Run by a veteran of Britain’s Boer Wars who had no sympathy for Trotsky’s revolutionary agenda, camp life included mandatory menial work by prisoners, who were expected to take care of “sweeping floors, peeling potatoes, washing crockery, and cleaning the common lavatory.” Trotsky was furious that his appeals to political authorities for release went unheeded but set about proselytizing the sailors regarding the necessity of revolution. The second officer at Amherst recalled years laterthat Trotsky “gave us a lot of trouble at the camp, and if he had stayed there any longer he would have made communists of all the German prisoners.”

Outside the camp, news of Trotsky’s arrest appeared in the New York Timesand spread to the Russian capital. The British ambassador there declared Trotsky a paid agent of Germany, while revolutionary parties denied the charge and insisted that Russia demand his freedom.

The leading ministers of Russia’s first Provisional Government were not themselves revolutionaries. Aware of the threat Trotsky posed and his refusal to accept their legitimacy, they felt less sympathy for his plight. But they recognized the need to garner support from the left, and after weeks of stalling, the government caved and requested Trotsky’s release.

Trotsky, who would do so much to shape his country, did not complete his journey to Russia until early May, months after the abdication of the tsar. Fellow revolutionary Vladimir Lenin had arrived a month before, permitted passage through Germany in a "sealed" railroad car, which kept him from internment there as a Russian. Trotsky declared his solidarity with Lenin that July.

If Trotsky missed the first Revolution of 1917, he made up for it by plotting the second. After a six-week prison stay for abetting an attempt to overthrow the government, he rallied the local workers and built support among war-weary soldiers frustrated with Russian involvement in the Great War. No one did more to mobilize Bolshevik supporters for armed insurrection.

After Trotsky masterminded military strategy during the Bolshevik seizure of power that fall, the nullification of election results months later scuppered any possibility of a democratic Russia. Trotsky took up the mantle of the People's Commissar of Military and Naval Affairs, organized the Red Army and led it through civil war against a shifting alliance of monarchists, democrats, reactionaries, and nationalists aided by foreign support. His presence in the Bolshevik rise to power and establishment of the Russian revolutionary state is so outsized that it becomes hard to imagine the same history unfolding in his absence.

But Trotsky’s internment and release had another legacy. Sailing away from Nova Scotia on a Danish ship, he wrote a letter blasting Russian diplomats for failing to aid him and the citizens arrested with him. A German diplomat soon noted that as a result of his time in Canada, Trotsky had developed a “burning hatred of the English.” Later that year, he wrote a pamphlet decrying the “lawless attack” made on Russian citizens. The pamphlet, “In British Captivity,” became a mandatory part of the Red Army’s traveling library during the Russian Civil War.

As much as Trotsky hated his detention, it later inspired him to recommend a similar approach to his fellow revolutionaries. In June 1918, he suggested putting a group of problematic prisoners of war in a concentration camp. This was not unusual; prisoners of war were being held at that moment all around the world. A few days later, however, he delivered a memo in which he proposed that it might be advisable to put members of the bourgeoisie in camps, too, doing “menial work (cleaning barracks, camps, streets, digging trenches, etc.)”—just the kind of jobs he himself had been required to do at Amherst.

Later that summer, Lenin built on Trotsky’s idea, actively calling for mass terror against his opponents and instructing that suspect individuals be “locked up in a concentration camp outside town.” Camps were soon effectively in use in several places, though it would be years before the network would fully fuse with a Russian tradition of forced labor to spread outward from the ur-camp at Solovki—a monastery complex on a subarctic island north of the Russian mainland.

Established as a “camp of special significance” by Lenin months before his death in January 1924, Solovki would transform into a legendary place of torture and executions. But not until Joseph Stalin eclipsed Trotsky’s influence and consolidated his power after Lenin’s death would it become the model for the Gulag, the Soviet state’s widespread adoption of political rehabilitation through forced labor. In time more than 18 million prisoners would enter its camps, and more than a million and a half of those inmates died there.

Aware of the unjust aspects of his own detention, Trotsky transformed the humiliation of his unwanted Canadian holiday into a strategy built atop the internment camps from World War I. In doing so he expanded the possibilities of what a concentration camp could be. By imagining the camps as holding pens not just for enemy aliens during a time of war, but also for any fellow citizens who were in some way suspect, he transformed these camps into a tool by which a government could exert control over its own citizens without due process.

Including concentration camps as a part of revolutionary strategy, Trotsky ensured that they could also be a tool of political reconstruction. During the decades that followed, in states such as the People’s Republic of China, North Korea, and Cambodia, preemptive civilian relocation and detention would become a defining feature of revolutionary justice—or its absence.

Andrea Pitzer is the author of The Secret History of Vladimir Nabokov and the founder of Nieman Storyboard, the narrative nonfiction website of the Nieman Foundation for Journalism at Harvard University. She is working on a history of concentration camps.