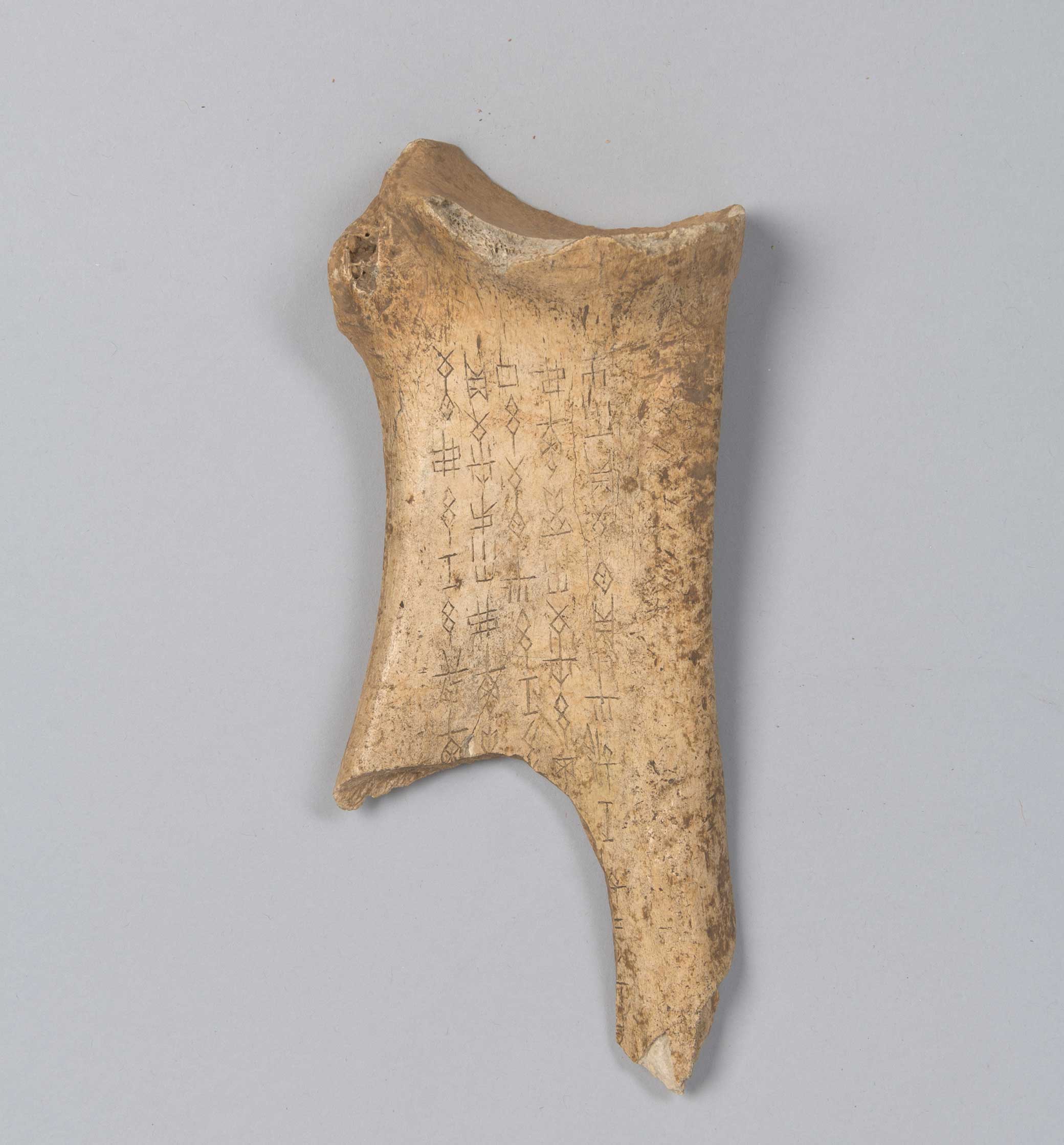 China invented the longest lasting and most stable writing system in history. Chinese—the language—as we know it today is almost the same as the first inscriptions from nearly 3,200 years ago. And Chinese—the script—is the only system in the world still used to represent the language for which it was invented.

Somehow, someway, even the first grumblings of its existence were remarkable. We find a fully formed system, a complete repertoire of signs, from the very first moment we encounter it: no proto-, no tag labels, no numeric tablets with four names carved into them. The first examples of Chinese contain complete sentences, almost all comprehensible. An unprecedented feat.

So does this mean that the Chinese script was invented overnight? That it sprouted like a mushroom at the end of the second millennium bc, already fully formed? Not likely. Much more probable is that what we’re seeing is already an advanced stage, far removed (though we don’t know how far) from the moment of invention. Its syntax is flexible, the number of characters already substantial—between three thousand and five thousand, all well designed and clear. Hundreds of inscriptions on turtle shells, ox scapulae, and bronze objects, buried in various tombs, concentrated around the capital of the Shang dynasty, Anyang, in northeast-central China.

The question we must ask ourselves about these remains is whether, indeed, they remain only because the inscriptions are found on weather-resistant materials, much less perishable than material like papyrus or parchment. Turtle shells and metal make for perfectly durable surfaces. We might assume that the evidence we have represents only the few lucky survivors—that an incalculable number of inscriptions fell victim to time’s voracity, thrown pitilessly down its gullet, never to be seen. A much more realistic scenario, compared with imagining that some hyperliterate scribe, in the court of the Shang dynasty, conceived of something as finished and polished as was the Chinese script in 1200 bc, all in the blink of an eye.

Assuming, then, that the first phases came earlier, how far back must we date its invention? Scholars have pointed to Neolithic signs as antecedents—signs spread throughout China, from Banpo, in Xi’an, in the west to Liangzhu in the east and dating to about 5000 bc—though nothing is certain, even if some of the signs resemble those found in Anyang. They’re not sufficient, in any case, for re-creating a complete inventory. We can’t label a few simple signs, with their crude geometry, a “script.” That the eventual script might have grown out of former symbols is by no means an absurd hypothesis—in fact, it’s true for other regions—but proving that usage and meaning have remained consistent over the span of millennia is an extremely difficult task. How would you piece it all together? It would be like connecting two dots that are miles apart, with nothing in between to guide you: there’s no path, and without a path we’re lost.

And the timeline problems don’t end there: 1200 bc is much later than the inventions of writing in Mesopotamia and Egypt. Two millennia later. And two thousand years is a long time. People migrate. Relationships form, even between distant populations. Ideas take root. And even though there’s no such evidence in the archaeological record, we must, out of intellectual honesty, ask ourselves whether China invented anything at all. Perhaps some external influence, one of these already literate regions, butted in?

It would be unfair to dispatch this question with a yes or a no. Doubts about possible influences remain. Though perhaps this is just being overcautious. By the looks of it, China invented writing, just like Mesopotamia and Egypt.

The first inscriptions were various texts, sometimes up to five hundred lines long, carved into the lower part of a turtle’s shell, called the plastron. The plastron is the belly of the shell—a smooth, flat surface, all but asking to be inscribed. We might assume that this surface was chosen for its durability, but the truth is we have no idea what the motive was. Many of these plastrons bear no inscriptions (they’re anepigraphic). The mystery of why they chose these objects is essentially impenetrable. 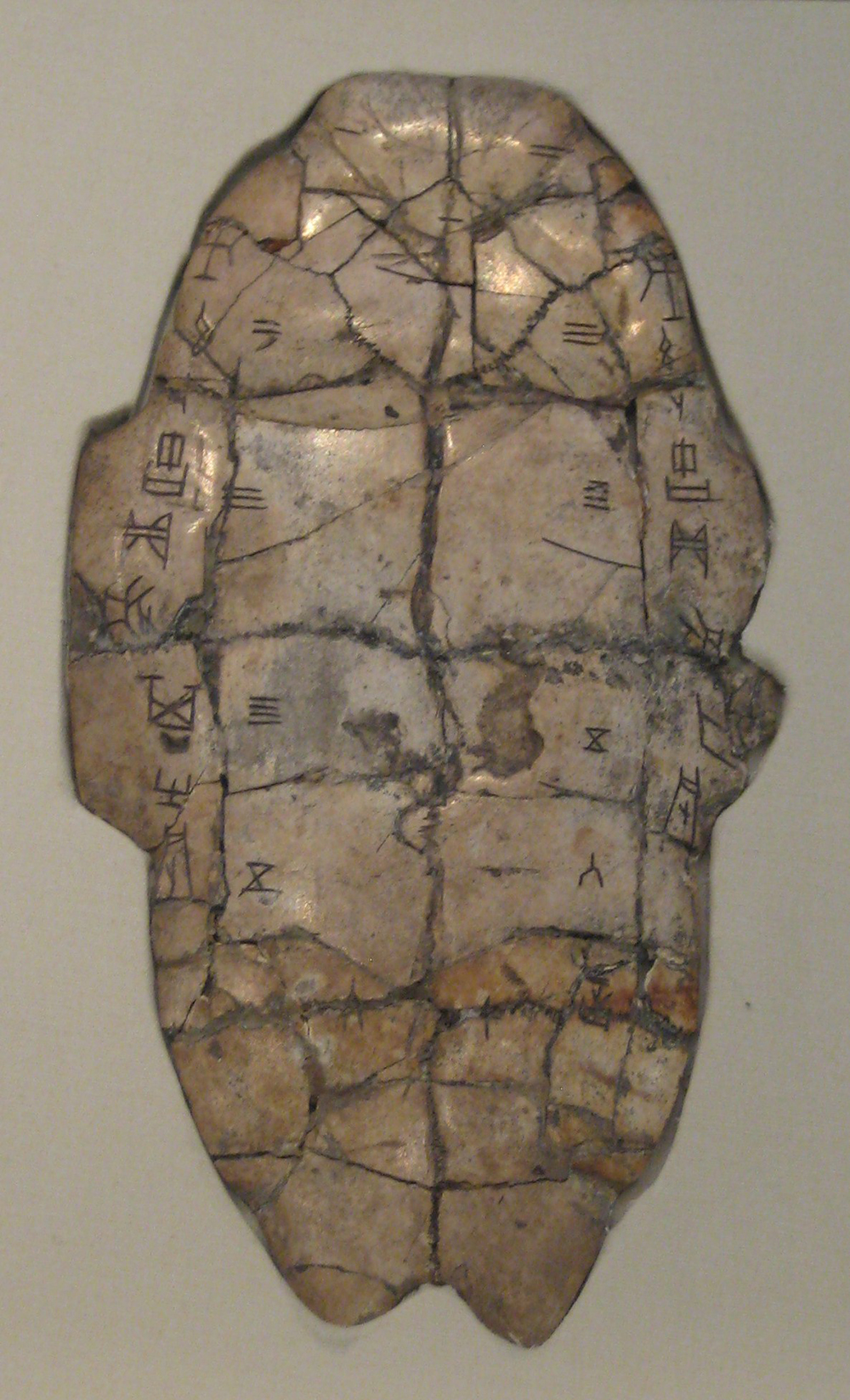 Other inscriptions are found on the shoulder blades of oxen—a much less welcoming surface for writing. They lack the plastron’s flatness. And here again we have no sense of why they were chosen as a writing surface. Durability does seem like a prerequisite, but we simply can’t rule out the influence of pure chance. We know very little about these objects, but we know a whole lot about what’s written on them.

Engraved on these objects are the divination practices of the highest echelon of Chinese society, the royal court of Anyang, and they are attempts to communicate with the beyond. We here enter the realm of the paranormal, though even in this world, the Chinese followed their own spirit. Modern fortune-tellers, especially in America, use tablets engraved with letters of the alphabet and the numbers 0 to 9—known, of course, as Ouija boards (the name, it would seem, derives from the French oui and the German ja, an affirmative yes). We’ve all seen images of people calling questions out to the dead, the triangular pointer sliding across the letters, forming the words of their response—which typically comes in the “he loves me…he loves me not” variety, a simple yes or no. Blunt, penetrating answers are the key here. That way the dead don’t have to work too hard, and the living can get their kicks.

In Anyang the goal is much the same, though the approach is a bit different, since the method of communication isn’t put down in writing straight away. The séance happens first, then comes the engraving of the text. The text is the cherry on top, a means of setting the events in stone, a kind of chronicle. So went divination in the Shang dynasty. It’s most likely that these interrogations were conducted orally. The questions revolved around the king: Will his various endeavors succeed? Will it be a good harvest? What new disasters await us this week? They’d then heat up particular areas of the turtle shell or ox scapula and wait for a crack to form in the surface. That crack was the message, and its shape had to be well defined in order for the response to be valid. Last, they’d carve the text of the question they’d asked aloud directly onto the crack, to elicit a verdict: a positive or negative prophecy. The text was arranged in two vertical columns and followed an almost formulaic pattern: the date, the week (which was ten days long), the type of prophecy, and the name of the functionary who’d asked the question. And then the question itself.

Here’s an example plucked at random:

Five days later, a messenger from the west will certainly arrive with bad news. Zhiguo reports that Tufang attacked his eastern border and seized two settlements. Furthermore, the Gongfang have invaded the lands on our western front.

Imagine an ox bone reporting on two or three weeks of enemy attacks. And along with these divinations came dreams, previsions, sacrifices made in honor of a group of spirits, among which figured their royal ancestors. These are pieces of flash fiction, micronarratives, facts and figures—a carefully arranged bulletin.

The history of the Chinese script is tied up with the history of a woman. The tomb of Fu Hao is the most extravagant tomb of the Shang era and its discovery in 1976 one of the most significant in all of Chinese archaeology. Not only because the tomb was miraculously found sealed and intact, but because of the window it gives us into the glorious life of Fu Hao.

Fu means “lady,” and the tomb is dedicated entirely to celebrating her life. Lady Hao was a formidable woman, to say the least. Her position one to which few women in antiquity could ever have aspired. Her tomb overflowing with artifacts in jade (more than seven hundred), bronze (around two hundred), engraved turtle shells. Three hundred and fifty inscriptions of her name. Her entire life contained within. She was one of the sixty-four wives (I kid you not) of Wu Ding, the first of the Shang dynasty’s nine kings. But Lady Hao was not just any old wife. From the inscriptions and the weapons found in her tomb, we know that she was a military commander, in charge of multiple campaigns, with thirteen thousand soldiers and several generals under her command. She was the most feared leader of the Shang dynasty, with the gall to face even the dreaded Guifang of the north. 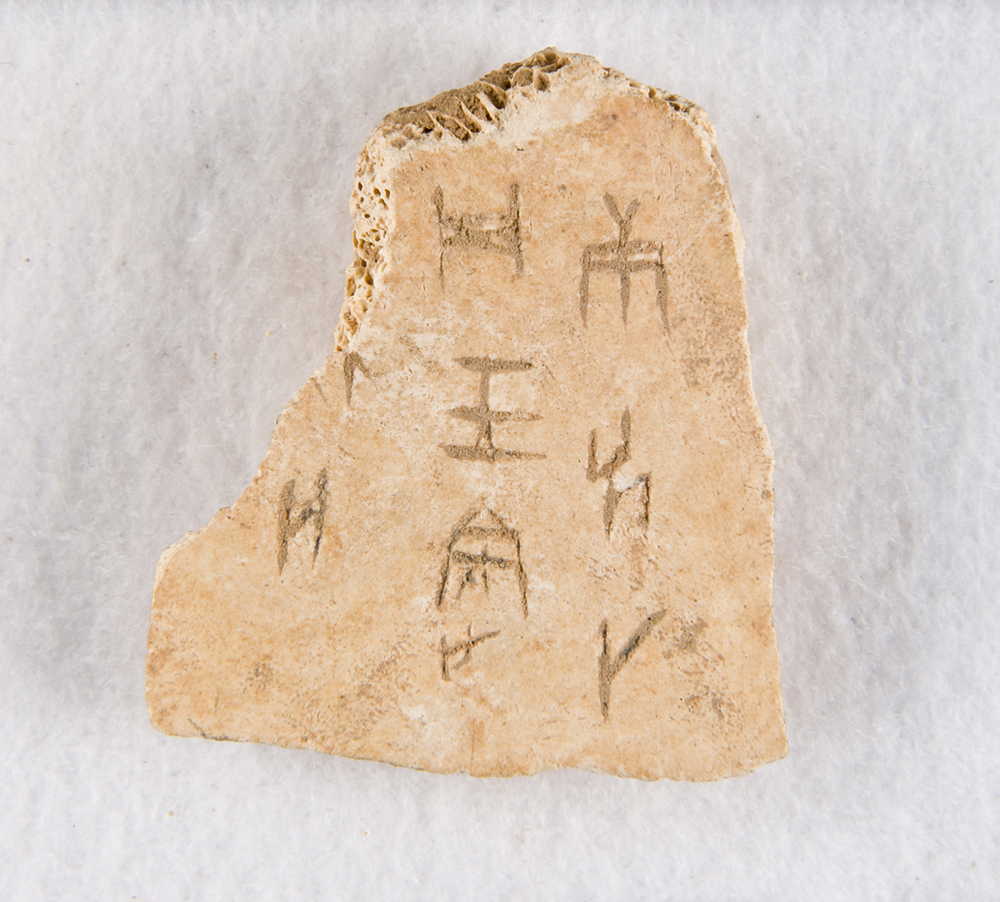 Beyond all this, she was also her husband’s adviser. And a professional fortune-teller. The fact that the king gave her this responsibility is testimony to Lady Hao’s enormous power and to just how highly Wu Ding regarded her. Through divination, the king followed his wife’s pregnancy, fretting over her health and the health of their unborn child. The king’s prognostication is quite interesting. Wu Ding identified two days of the week as being auspicious for giving birth—the turtle shell was covered with cracks, the question posed again and again. And the results? “Three weeks and one day later, on jiayin, the baby was born. It was not good. It was a girl.”

In what was very much a man’s world, Lady Hao was a unicorn. Not only was she an example of a powerful woman, she was an example of the rarest intellectual fortitude. And it was Lady Hao who catalyzed the invention of a new script, shepherding it into being. I can think of no similar example: a woman who was not only powerful but gifted with such foresight. Boudicca led armies, Queen Victoria simply led, Catherine the Great was a patron of the arts. But Lady Hao had a step on all of them: she understood the value of culture before anyone else, before culture even had a name. Lady Hao saw the future. In our long and male-dominated history, it may well be that Lady Hao is a woman without peer. 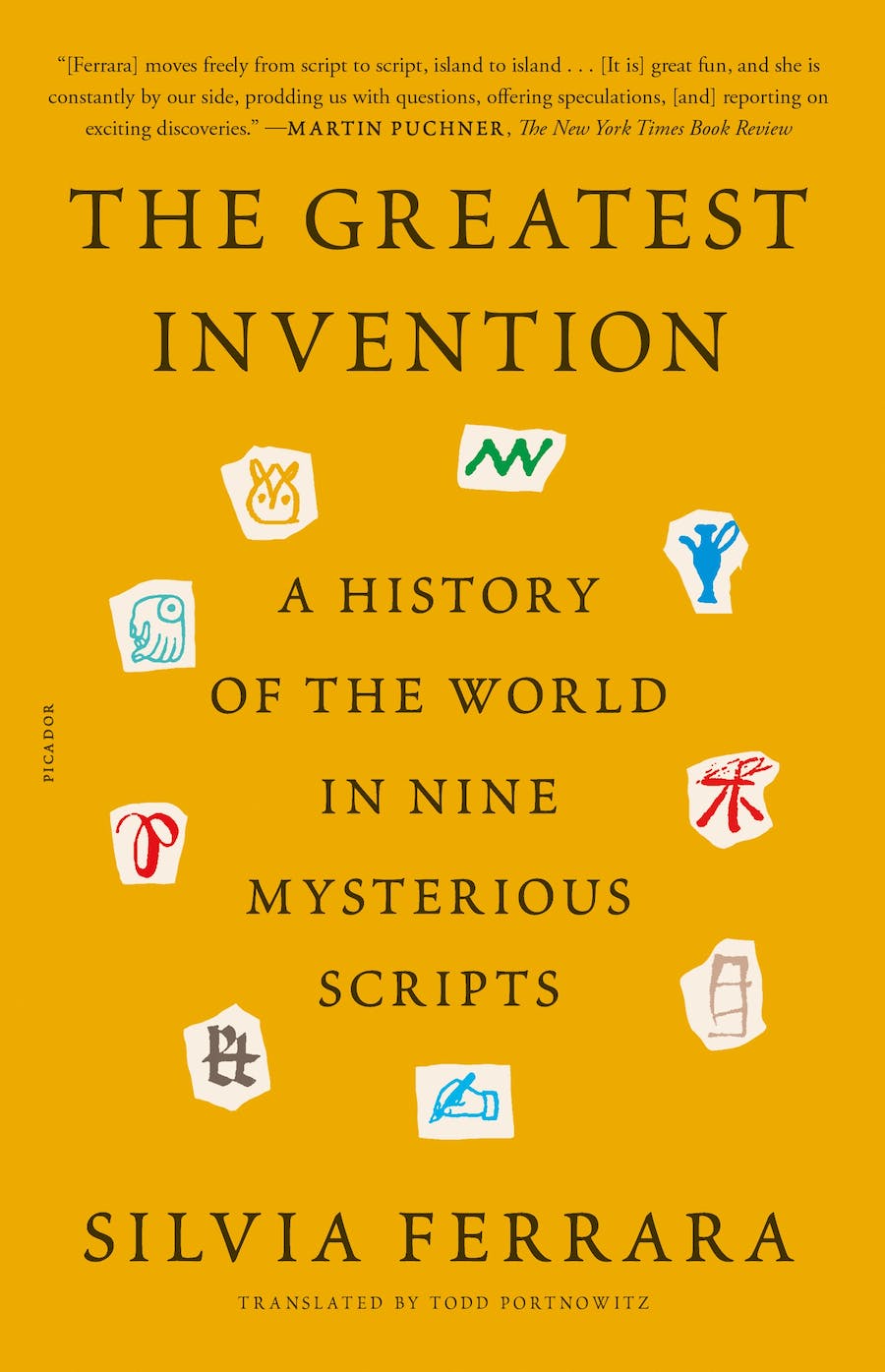