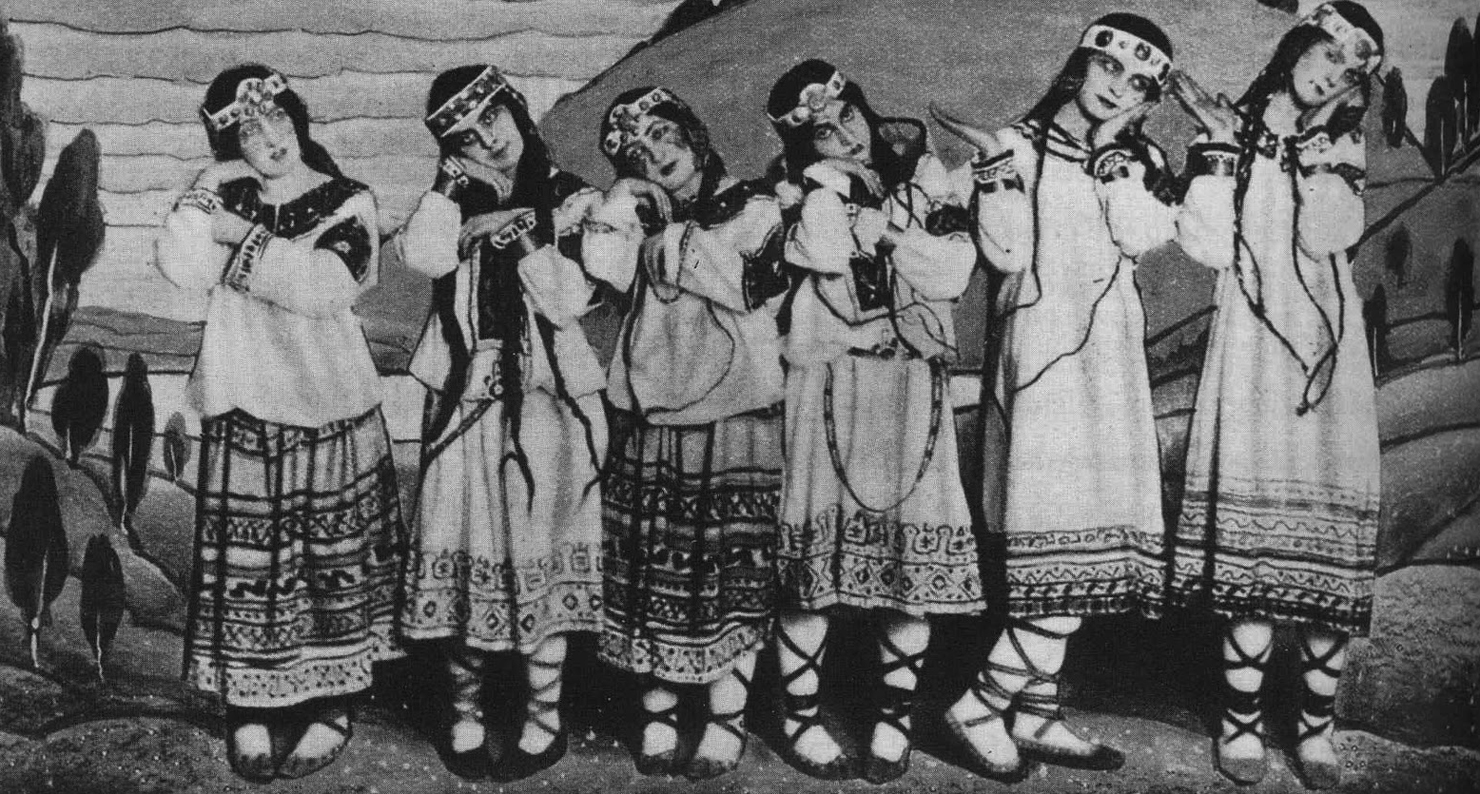 The premiere of Le Sacre du Printemps, on May 29, 1913, at the Théâtre des Champs-Élysées in Paris, is perhaps the most legendary theatrical event of the twentieth century. During the performance of Le Sacre, or The Rite of Spring, there were fistfights, stampedes, chairs knocked over. A lady took out her hatpin in order to stab the man next to her (who may or may not have been Jean Cocteau). The police had to be called in during intermission in order to take away forty of the audience’s more boisterous members. One of the double bass players in the orchestra reported that “many a gentleman’s shiny top hat or soft fedora was pulled down by an opponent over his eyes and ears, and canes were brandished like menacing implements of combat.” Brawls carried on into the streets and at least one duel was fought the next day.

These accounts, astonishing as they may be, fail to express the riot’s fervor. “Nothing of all that has ever been written about the battle of The Rite conveys a weak impression of that which actually happened,” the French artist Valentine Gross-Hugo would later recall of the evening. “The theater seemed to have been struck by an earthquake. It seemed to shake.”

What explains this behavior? Critics would later try to blame the “knot-headed foreigners” in attendance, the influx of tourists who were crowding the cultural scene with their deep pockets and uneducated eyes. But this probably counts as Parisian snobbery. The answer lies in what was taking place on stage. Produced by the avant-garde Ballets Russes—with choreography by the controversial Vaslav Nijinsky and an experimental score by Igor Stravinsky—the ballet had a violent aesthetic that was provocative enough to spread confusion in its wake

The Rite of Spring evokes a pagan ceremony in which a virgin girl is sacrificed to the fertility god, the god of spring. A tribe gathers on the barren Russian Steppe in an “adoration of the earth.” The maiden is chosen and, after watching the ritual from its center, dances herself to death. All this is done in the hope that the year’s harvest will be bountiful.

The subject, foreboding as it seems, was reflective of a growing interest in cultures outside of the Western tradition prevalent at the time. The Rite premiered after Paul Gauguin had sent his Tahitian landscapes back to Paris, and Henri Matisse and Pablo Picasso had incorporated the sharp angles of African masks into their portraits. The flourishes of the Victorian era were seen as tired and worn, hollow of meaning. Voices of the literary and plastic arts in Europe turned away from their own histories in an effort to seek representations of a hard-edged modernity.

The riot is often discussed in relation to the ballet’s modernist score by Stravinsky. Its dissident chords went against every precedent of melodic harmony, while a beat captured the inchoate rhythms of the “scratching, gnawing, and wiggling birds and beasts.” Stravinsky upended tradition so completely that The Rite almost exceeded the limits of musical notation—when he first conceived of the sounds for the finale, the “Sacrificial Dance,” he did not know how to write them on paper.

At the time of the ballet’s premiere, critics didn’t pay so much attention to the music, giving it brief treatment (“deformed,” “demented”) before moving on to the first offense of the evening: the dancing. This was likely due to the frenzy of the audience noise, which reached such a pitch that it probably drowned out the ninety-instrument orchestra. The forty-six dancers on stage, deafened by the mass chaos in front of them, had the impossible beats of the score shouted to them from the wings.

The performance had none of the charms of typical Slavic folk or provincial dance. The dancers moved in “ataxic contortions,” their gestures sharp, heads bent to one side, their feet turned inwards as if pigeon-toed. An onlooker described their movements as “almost bestial,” like they were walking up a steep incline. The movement so contorted their physical features that it looked neigh-impossible, as if it would break them. The steps were simple—stamping, trembling, jerking—yet they held a spastic, raw energy, labeled as both pathological or animalistic in the reviews.

Gone were the usual airy graces of the ballet, those leaps and stretches upward that glorified the divine right of aristocratic rule. The human figure, now worshiping the earth, took on a lower center of gravity, falling in jagged motions heavy to the floor.

Vaslav Nijinsky, the mastermind behind the steps, was a twenty-three-year-old dancer of Polish origin. Under impresario Sergei Diaghilev, the Ballets Russes had in the past attracted audiences with its costumes, set designs, and librettos—everything but the dancing. With Nijinsky, all of this changed. His exotic looks and fierce performances turned him into the star of the company. While onstage, fans would sneak into his dressing room in order to steal his underwear.

In order to achieve this “revolt,” Nijinsky demanded 120 hours of rehearsals so that he might dictate the terms of each tremor. This was not chaos unleashed; even the harshest critics of The Rite would not call the dance unorganized. If anything the new style demanded an even greater degree of muscular control. The dancers had to divest themselves of a lifetime of classical training in order to enact acerbic motions that looked suspiciously like those of a gauche pedestrian.

The highlight of the ballet, comprised of the most difficult steps, was the Chosen Maiden’s dance to death. Nijinksy asked her to stand “like an idiot” before covering her face with her hands. Her whole body shook in so convincing a self-destruction that concerned members of the audience cried out for help (“Un docteur!” “Un dentiste!” “Deux dentistes!”). After about five minutes of this, the maiden leapt vertically into the air, one arm raised straight above, before collapsing to the floor. As the curtain closed, her corpse was lifted high on the arms of the ritual’s participants.

One of the more upsetting aspects of the performance was the lack of emotion on the dancers’ faces, which gave the movement a detached, almost clinical quality, as if their bodies were void of an interior consciousness. The Chosen Maiden never showed the requisite pathos of the tragic protagonist of Romantic ballet. Instead, her body dissolved into the social function of the rite, jerking like a puppet controlled by an all-powerful hand. During rehearsals, Nijinsky snapped if the dancers betrayed even a trace sentimentality; all feeling was to be conveyed through the form. “There are no human beings in it,” he wrote of The Rite to Stravinksy. “It is the life of the stones and trees.”

This inhuman quality gave Le Sacre du Printemps the nickname “massacre du printemps.” Jacques Rivière, publisher of Marcel Proust and André Gide, wrote of the dancer’s lack of self-awareness, “It is like the blood that beats from within against the wall of the skull, without any motive other than its own force.” This new kind of physical action—unadorned, unabashed—treated the human impulse directly, rather than relying on the presentational artifices of ballet’s imperial heritage.

After the run of The Rite, which consisted of a total of nine performances, Nijinsky married; Diaghilev, his former lover, fired him. Nijinsky choreographed two more dances, both failures, and floundered without the support of Diaghilev’s theater company. Starved of his craft, Nijinsky was diagnosed with schizophrenia in 1919 and spent the next thirty years in an institution, talking little and dancing even less.

When Diaghilev wanted to revive The Rite seven years later, his company’s dancers had (perhaps willfully) forgotten the steps. If the work had brought about a revolt in dance, the evidence had disappeared, with only a few pictures left of dancers posing in their Muscovite costumes. No other artistic event has gained so much celebrity on the basis of so little evidence. The riot of the audience would be recounted again and again, as if the original movement could be felt vicariously via the testimony of its impassioned witnesses.

In 1987 the dance historian Millicent Hodson claimed that she had found 85 percent of Nijinsky’s choreography after searching through various archives. Navigating the rest of the score with an “educated guess,” she directed Chicago’s Joffrey Ballet in an effort to recapture what had been lost. This reconstruction packs some of the premiere’s punch; at times it’s downright creepy, and the shapes are strange. Yet it seems to lack the tense, compressed energy that critics wrote about in the first production.

The Rite still looms large in the history of art, progenitor of an aesthetic revolution even if it failed to leave any direct successors. The absent ancestor is the one most fetishized—think of the hubbub if we no longer had Lolita or “Howl,” only antiquated newspaper clippings giving us scattered details of the texts’ moral improprieties. Perhaps the lack of any evidence has left the premiere all the more vivid in the popular and artistic imaginations. Nijinsky’s genius lingers only as a ghost.

To attribute the riot to the uppity mores of the Parisian elite would be to deny the dance its spectacular power. The Rite of Spring was an ugly thing; in hindsight, critics linked its energy to the pending chaos of WWI. Beauty had been murdered, only to be resuscitated, stark and naked, in unrecognizable form. In a strange fulfillment of Nietzsche’s prophecy, matter triumphed over mind, and art returned to its origins so that it could be made over anew. “For an ordinary viewer, [it will be] a jolting impression and emotional experience,” wrote Nijinsky to Stravinsky during the rehearsals. “For some it will open new horizons flooded with different rays of sun. People will see new and different colors and different lines. All different, new and beautiful.”

Madison Mainwaring, a former intern at Lapham’s Quarterly, is a writer living in Paris.