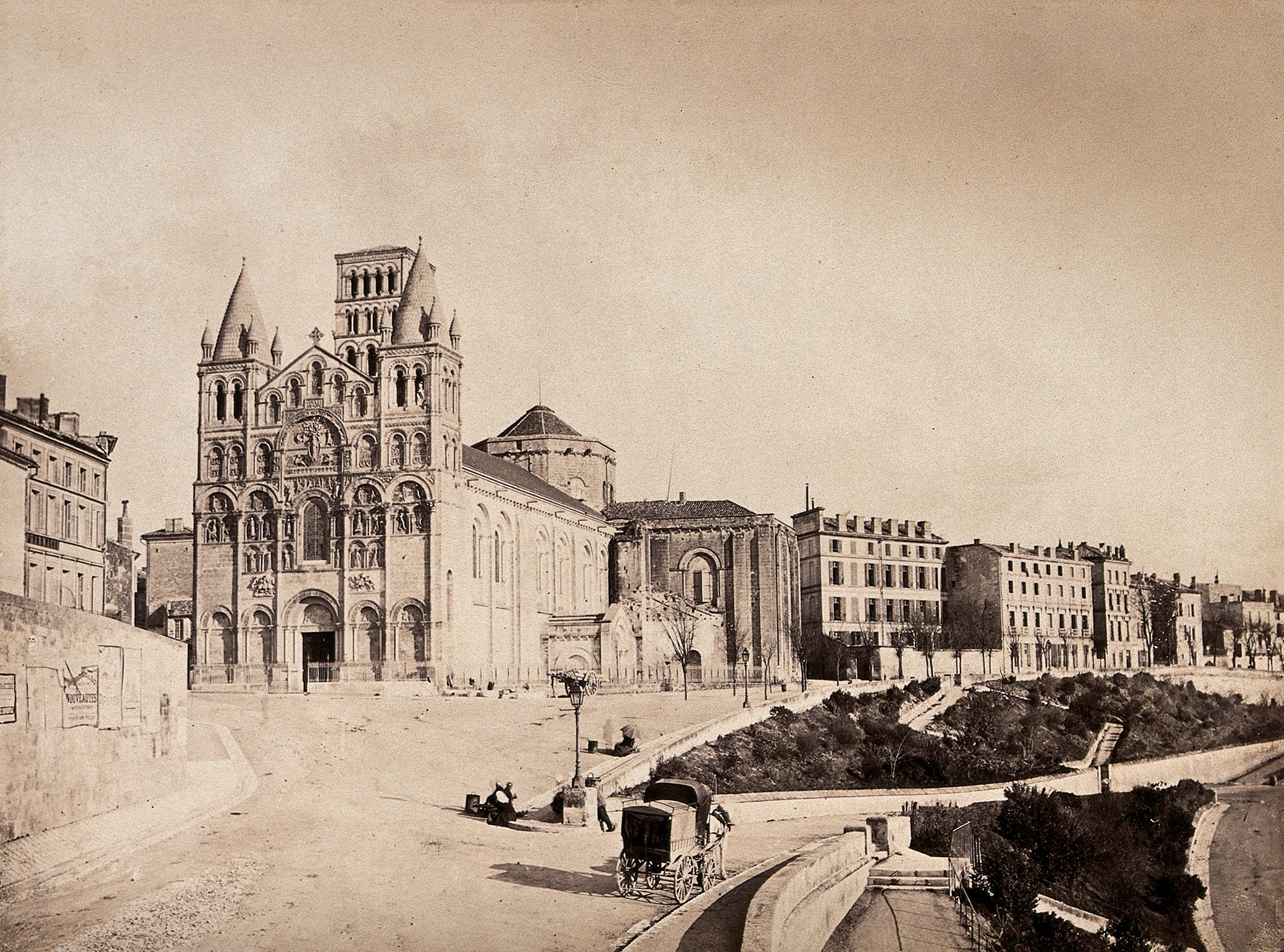 Angoulême was a backwater in French Revolutionary politics, as in so much else. It “is never cited in the chronicles of the events of the revolution,” according to the summary of the only substantial history of the French Revolution in the town. It was the capital of “a department that had no exceptional events or personalities who should figure in the revolutionary pantheon,” and it was insignificant, even, in the pantheon of the counterrevolution.

But the revolutionary period was a time of transformation for everyone in Angoulême, as for everyone elsewhere in France.

The earliest revolutionary changes, in Angoulême, were in the local economy of public administration. Angoulême, as the capital of the new Department of the Charente, was endowed with an elected assembly, a council, and a permanent directory: opportunity after opportunity for the lawyers and writers and registry clerks of the town.

There was a new municipal administration, with new committees and commissioners, new celebrations, and new certificates of “civisme,” or civic duty. An immense map, a “Plan Directeur,” was drawn of all the streets and houses in Angoulême, numbered according to a system of numerals established in 1769 (in connection with the lodging of the militia). There was a “matrix of property contributions” listing every house, with the names of the proprietors and tenants, the size and “content” of the property, and an estimate of net taxable income in 1791. There was a census of donkeys (there were 268). There was also a “general census of horses,” with an assembly in the Place du Mûrier. In the “inventory” of registers of the year 4 (1795), there was a list of “sacks,” a “census of wool,” and a “list of the fish oil existing in the district.” There was a register of “personal, property, and sumptuary contributions,” with declarations of rent, carriages, and domestic servants. There were also patriotic gifts to be counted, from the town to the nation: in March 1793, 198 pairs of shoes, 181 pairs of gaiters, 27 pairs of stockings, 8 shirts, and 1 hat. There were gifts, in turn, from the nation to the town: a cod for every head of household in March 1795.

The Department of the Charente, created in 1790, had an imposing appetite for “fixed and regular procedure.” “Letters and packages sent to the directory,” according to an undated and heavily annotated draft in the earliest file about the administration of the department’s archives, “will be placed on the desk [bureau], opened by the president, read to the assembled directory, registered, and distributed without delay to the offices [bureaux].” There was a subdepartment of the secretariat of the department within a few years, together with four other departments [bureaux], a bureau of émigrés, an accounting department, a commissariat, and a department of archives.

The revolutionary period was a time, too, of the public events that the new officials described as “joy.” In a dawn celebration of political abstractions, in 1793 “four hundred female citizens” dressed in white paraded in support of “unity and indivisibility,” according to a parliamentary report, with a banner on which a “colossal statue, representing the French people, crushed federalism.” There was a cortege of “administrators” a few weeks later, who paraded to the house of a young girl of eighteen “whom public opinion had designated to represent Reason.” In a festival of “sovereignty,” there was a statue that crushed the “monster of despotism,” together with “capitularies, decrees, maxims of royal law, pamphlets by Burke”; it was accompanied by professors in the formerly Jesuit college, who marched to the Place du Mûrier together with the commissioners of police, “cursing ancient slavery” to the sound of military music.

The new administrative procedure that had the most evident consequences for the events of ordinary life—or for the records that have been the principal source of the inquiry so far—was the most universal. It was the institution, implemented in Angoulême in November 1792, of civil registration: a transition, over the course of a few hours, from the system of parish registration of baptisms, marriages, and burial to the registration by public officials of births, marriages, deaths, and divorces.

Divorce was made legal in France in September 1792, and the new time of republican government came to Angoulême in 1793. The registers of the parishes of Angoulême were subsumed almost effortlessly, in November 1792, into the new rhetoric of civil life.

The new civil registers began a few weeks later, on January 1, 1793, kept by the public officers of the town. The revolutionary names of the months were used—hesitantly—starting in November 1793; for births and deaths in Brumaire (November), and for marriages and deaths in Frimaire (November/December). The expressions were unfamiliar; brumaire appeared as brumere and decès (death) as deceais or dessert. The second divorce in the town appeared in the civil register of marriages on Valentine’s Day of 1793; it involved two of the 4,089 individuals from the parish registers of 1764, the son of a tailor, baptized in January 1764, and the daughter of a policeman, baptized in August 1764.

There were ninety-six divorces in Angoulême over the twenty-four years that divorce was legal in France, of which a quarter were on grounds of the emigration of one of the parties (in each case, the husband). The other divorces were the outcome, for the most part, of the ordinary misfortunes of life. There were four farmers who were divorced, two wigmakers, a horse trader, and a grocer who was divorced from a candlemaker and remarried, a few days later, to another grocer. One man who divorced in 1793, after eighteen years of marriage, refused to sign the register on the grounds that “he did not want to.” Two sisters, the daughters of a laborer, married two brothers, the sons of a farmer, in year 2 (1793) of the revolution; they divorced in year 9 (1800), on the grounds that the brothers had “been absent” for around eight years without providing “any news” of themselves; the sisters then married two other brothers, the sons of a stonemason, of whom one had been among the 4,089 in the records for 1764.

The daughter of a clothworker in St. Ausone, Jeanne David, was married in 1795, at the age of fourteen, to Bartélemi Raimond, described as a “deserter from Spain,” whose parents were living in Switzerland. A little over a year later, when she was fifteen, she petitioned for divorce, on grounds of “incompatibility of temperament and character.” In the record of the preliminary arbitration—inserted “by error” in the civil register of marriages—the friends of the parties determined that Bartélemi had been “not far from reuniting with his wife, but [she] never wanted to reach out to him,” and postponed the procedure for two months; after three further requests, she was divorced in June 1797. Jeanne David, described as a shopkeeper, died three months later in September 1797 at the age of sixteen.

The most demanding task of the new public officers was the duty, when someone arrived to declare a death, of hastening to inspect the deceased. There was also the registration of “abandoned” children. A midwife from St. Jacques “presented me with a girl aged around eight days,” one of the officers wrote on March 1, 1793; she had been found the previous night and “inscribed on the register of the said abandoned children under the number 365”; “I gave the girl in question the first name ‘Catherine’ (the said Catherine is marked on the head with a pink ribbon on the right side, three inches long and two and a quarter inches wide, and cut at one end).”

The destiny of illegitimate or natural children was brutal in Angoulême by the end of the old regime. The parish register for the suburban parish of St. Martin for April 1789 contained an eight-page petition to the bishop from an apprentice carpenter who needed a certificate of baptism in order to get married. He had never known who his parents were, or where he was born; he remembered that at the age of five or six he was living with a woman in a village in Périgord, but that when he was seven or eight the woman chased him out with “nothing but blows from a stick to get him to go through the door.” He then wandered from parish to parish, trying to earn his living, until he had a chance encounter with a building contractor from Angoulême who recognized the young boy, and took him on as an apprentice. In February 1789 the apprentice traveled back to Périgord, found the woman with whom he had lived, and in the presence of witnesses “called on her to declare who he was.” She refused; two other construction workers testified that they also had known him as a child and had no idea who he was. He was baptized in the parish of St. Martin in May 1789, and married there three days later.

The administration, or misadministration, of the “children of the nation” was on a different and industrial scale in the revolutionary years. The public officers of the commune recorded 689 deaths of abandoned or natural children in Angoulême in 1793–1802; many hundreds more died unregistered or in the villages surrounding the town. The desolation continued into the Napoleonic period. Ursule, aged one day, was inscribed on the register as number 1,340 in 1804, and identified as “marked with a piece of black velvet twenty-four centimeters long by one centimeter wide, attached to her neck.” Denis, number 1,341, the following day, had a piece of yellow striped silk attached to his right wrist; Laure, number 1,342, had a red ribbon attached to her left arm. Ursule with the black velvet, number 1,340, died at the age of eight days, in the “depot of abandoned children.”

Even the names given to the infants were brutal by the end of the period: Christine Desolée, Cyprien Almanach, Ischyrion Vert, Olympiade Lunette, Omer Papier, Onésine Perdrix, Privat Privé, Rustique Coq.

Excerpted from An Infinite History: The Story of a Family in France over Three Centuries by Emma Rothschild. Copyright © 2021 by Princeton University Press. Reprinted by permission. 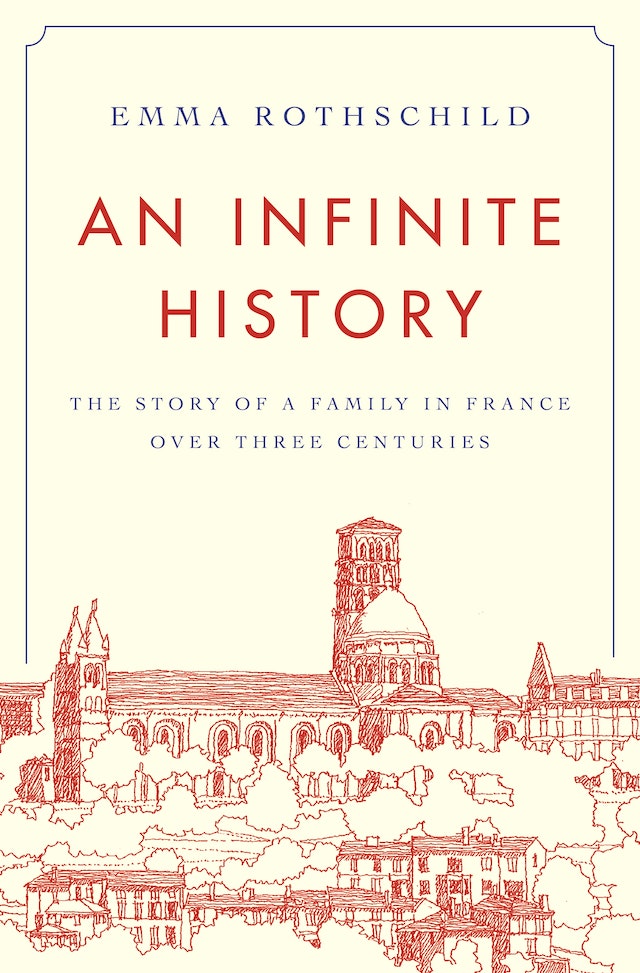 Emma Rothschild is the Jeremy and Jane Knowles Professor of History at Harvard University, where she directs the Center for History and Economics. Her books include An Infinite History: The Story of a Family in France over Three Centuries, The Inner Life of Empire, and Economic Sentiments.