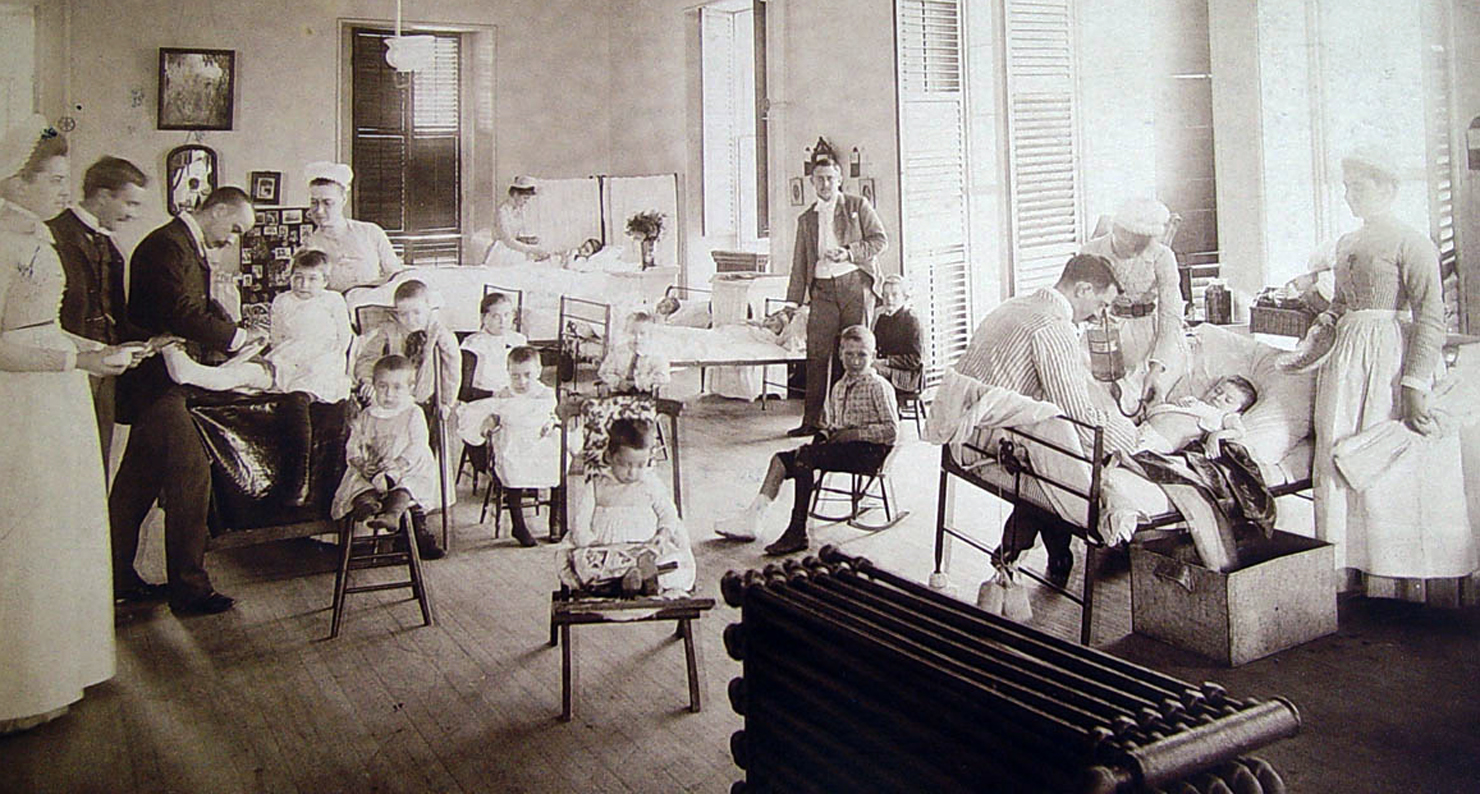 “Do pediatrics,” my friend insisted when, approaching my fourth and last year in medical school, I had to pick a site for my brief rotation in rehabilitation medicine. “It’s really chill.”

This seemed like sound advice, and not long after I found myself in front of a large, new building devoted to long-term pediatric care, whose sliding glass doors opened to a security desk in front of a central bank of elevators.

Walking purposefully in scrubs or a white coat typically gets you past any hospital security, but here the guards stopped me and took a thorough glance at my badge, noting the purple sticker that indicated I had received a flu shot that year. On the adult wards I might have felt impatient, but here I noticed the subtle yet invigorating sense of heightened purpose that seems to permeate most pediatric facilities.

After morning rounds I was given a tour of the center, where long-term and chronic conditions were treated, from rare genetic diseases to spinal cord injuries to severe autism and behavioral problems. One unit focused entirely on feeding issues, and families traveled from all over the country to participate in the specialized programs.

I spent most of my time on the inpatient floor, where children were often placed for extended recovery from an illness, injury, or major surgery. Many of these patients and their families had already spent many harrowing weeks in the main hospital, and the rehab center did not have that same surreal element that hovers around the rooms of acutely sick kids in the emergency room or intensive-care unit, where pacing parents and visitors looked as though they were waiting to wake up from a bad dream.

There were still plenty of moments, though, that reminded me there is more than one way to experience the world. There was one girl who had already been on the unit for a couple of months when I arrived. She had a congenital connective tissue disorder, and in the twelve years since she was born had undergone countless orthopedic, vascular, and cardiothoracic operations, with more being planned. Sharp, with a dry sense of humor, she was beloved by the staff and went about her daily physical therapy with a consistency that seemed like determination on some days and quiet resignation on others. The goal was to get her to use a walker before her next round of surgery. Almost every day her parents would come in and argue about whether or not the operation should be pushed back.

One afternoon her parents and the doctors were discussing different time frames and treatment strategies. Some favored grouping the upcoming operations together, while others thought spacing things out was the way to go. The patient seemed as oblivious of the adults as they seemed of her; she put on a new pair of noise-canceling headphones and tried to reach for a piece of folded paper on a nearby table while they talked to each other over her bed. I thought about trying to help since it seemed important to her, but I was too far away and was also supposed to be paying attention. After a few more tries, she crawled halfway out of bed and grabbed the paper. As she settled back into her pillow I saw what it was: the new food-service menu for that month.

One morning, when a nurse came into the physician workroom to say that a ten-year-old girl with conversion disorder would be arriving later in the day, a couple of residents rolled their eyes. Loosely, conversion disorder is what used to be known as hysteria: the presence of physical symptoms (most often neurological) in the absence of a physical cause. The origin of the symptoms, therefore, is presumed to be psychological—often something traumatic has recently happened or is continuing to happen in the patient’s life. Thus the disorder is named for the conversion of psychological injury or conflict into physical symptoms. It is unconscious and can affect people of any age, although most cases involve children and adolescents.

Before the new patient arrived I glanced at her transfer note. Lorrie had been in an ATV accident a couple of weeks earlier in her hometown, three hours away. Her teenage brother had been driving when the vehicle hit a rock and flipped over. The sister was thrown clear of the wreck, and the emergency room note said she was just a little bruised up, but the heavy machine fell on top of the brother, and he was sent straight to the ICU with a fractured thoracic spine.

At home a few days later, Lorrie suddenly lost the ability to walk. Her parents rushed her back to the ER, where once again the doctors couldn’t find anything wrong. Other than being unable to stand, her physical exam was completely normal; her legs had good muscle tone, sensation, and intact reflexes. Imaging and nerve conduction studies yielded nothing, and after all other causes had been ruled out, she was diagnosed with conversion disorder and referred to our facility.

The door to our workroom was always left half open, and at about three o’clock I saw Lorrie pass by in a wheelchair pushed down the hall by her parents. I waited a few minutes before I walked over. Lorrie was sitting alone on her bed, silently playing a puzzle game on a pink iPad. While I stood in the doorway, the faint, synthetic music filled the quiet air of the double room, and in the bed across from her a teenaged girl with muscular dystrophy turned over weakly in medicated half-sleep. I pulled the purple dividing curtain closed and Lorrie looked up from her game, smiling.

“Hi,” I said, amused at her directness. “Where are your parents?”

“I just walked them out,” said a nurse entering from the hall. “They had to go back.”

“My brother’s in the hospital,” Lorrie added, resuming her game.

Beginning the next morning, her treatment would be the same as that for someone with paralysis from a spinal injury. The best way to address a case like this, one of the neurologists told me, is to methodically go through the motions of physical therapy and let the patient slowly regain function on her own.

We have to take it seriously,” the doctor said. “She’ll be able to tell if we don’t.”

Lorrie’s regimen included stretching, massage, aquatic therapy, and electrical stimulation of leg muscles. Her parents came in and out frequently over the following week and our conversations were short; they were attentive and caring to their daughter, but their thoughts seemed elsewhere. I often wanted to ask how their son was doing, but there was never a good time.

“This is going to make my legs better?” Lorrie asked, giggling nervously as one of the physical therapists placed electrode stickers on her thigh during the first electrical stimulation session.

He pressed a button. Lorrie’s leg kicked out with an involuntary contraction of her quadriceps and she laughed gleefully.

“Do they have this at other hospitals?” she asked, catching her breath.

For the first week Lorrie got a little better every day. By day five she was standing on her own, and her discharge papers were prepared. The night before she was slated to leave Lorrie didn’t sleep, and in the morning her parents came to say that her brother was finally returning home. Unlike the sister, the brother would remain in a wheelchair; his spinal cord had been transected.

“We told you this, honey,” her mother pleaded after Lorrie threw her iPad across the empty room, cracking the screen against the opposite wall and dissolving into tears.

I worried she would be set back; that the wound which had found expression in her symptoms might be reopened; that she might not yet be able to let go of the reassuring and self-abusing connection she had unconsciously formed with her brother. Instead she cried for fifteen minutes and then gathered her things as her parents signed her discharge paperwork by the central nursing station.

A few of us watched from the window of the workroom while Lorrie and her father stood on the sidewalk waiting for her mother to pull the car around. “What a waste of resources,” said one of the residents as Lorrie climbed into the back of a station wagon.

My month-long rotation was coming to an end. A few days after Lorrie left, her roommate contracted a kidney infection from her catheter. She was moved to the main hospital, and her bed was taken by a boy with spina bifida. He was shy and hid under the covers during rounds, so the doctors talked to his mother who sat in a chair beside the bed. Just above the headboard, next to the empty IV stand, I noticed a chip in the white plaster about the size of an iPad’s rounded corner.

On my last day I met a five-year-old boy with osteogenesis imperfecta, a genetic collagen deficiency that weakens bones to the point where the normal bumps and falls of childhood result in broken arms and legs. There is another feature of OI, an association drilled into the heads of medical students in genetics and musculoskeletal lectures: blue sclera. The whites of our eyes are, in part, a layer of collagen, beneath which a fine web of veins drain deoxygenated blood back to the heart, and when collagen thins these delicate vessels are exposed. Something about the boy’s dark irises, swimming in pale blue, reminded me immediately of Lorrie, though at first I couldn’t quite figure out what it was.

Looking at this patient as he watched SpongeBob SquarePants with rapt attention while eating his lunch, I realized that what had struck me was the idea of the symbol itself, the eye that is more than an eye, the action that is more than an action; a phenomenon that is in many ways purest in childhood, though we may spend much of our lives struggling to master it and recapture that singular freedom from self-consciousness that produces it. It would be specious to say that the most sincere expression is that which is unconscious, but there will always be something especially youthful and evocative about unintended symbols, whether an infant’s gesture or paint on a canvas.

Of all the moments from my time in the pediatric rehab center, it is a routine image that remains clearest in my mind. It was Lorrie’s last full day and we were sitting at the small indoor pool waiting for her turn in aquatic therapy. She sat on the edge, dangling her feet and looking across the pool at a boy about her age working with the therapist. He was suspended waist-deep in the water by a harness attached to a large pulley on a steel beam that swung out over the shallow end, and they appeared to be doing some sort of exercise with foam dumbbells that could be pushed underwater for resistance.

At one point Lorrie got up and made her way to the other side of the pool, standing silently near the boy’s empty wheelchair. A few minutes later the pulley lifted him out, water dripping down his baggy bathing suit and atrophied legs as a technician unclipped his harness. Unnoticed by the others, Lorrie took a few quick steps closer and grasped the wheelchair’s handles, her small fingers disappearing into the deep grooves of the plastic grip. She held on, motionless for a moment, but let go and slipped away before the tech turned back around.

Caleb Gardner is currently an MD candidate at the Johns Hopkins University School of Medicine in Baltimore, Maryland.