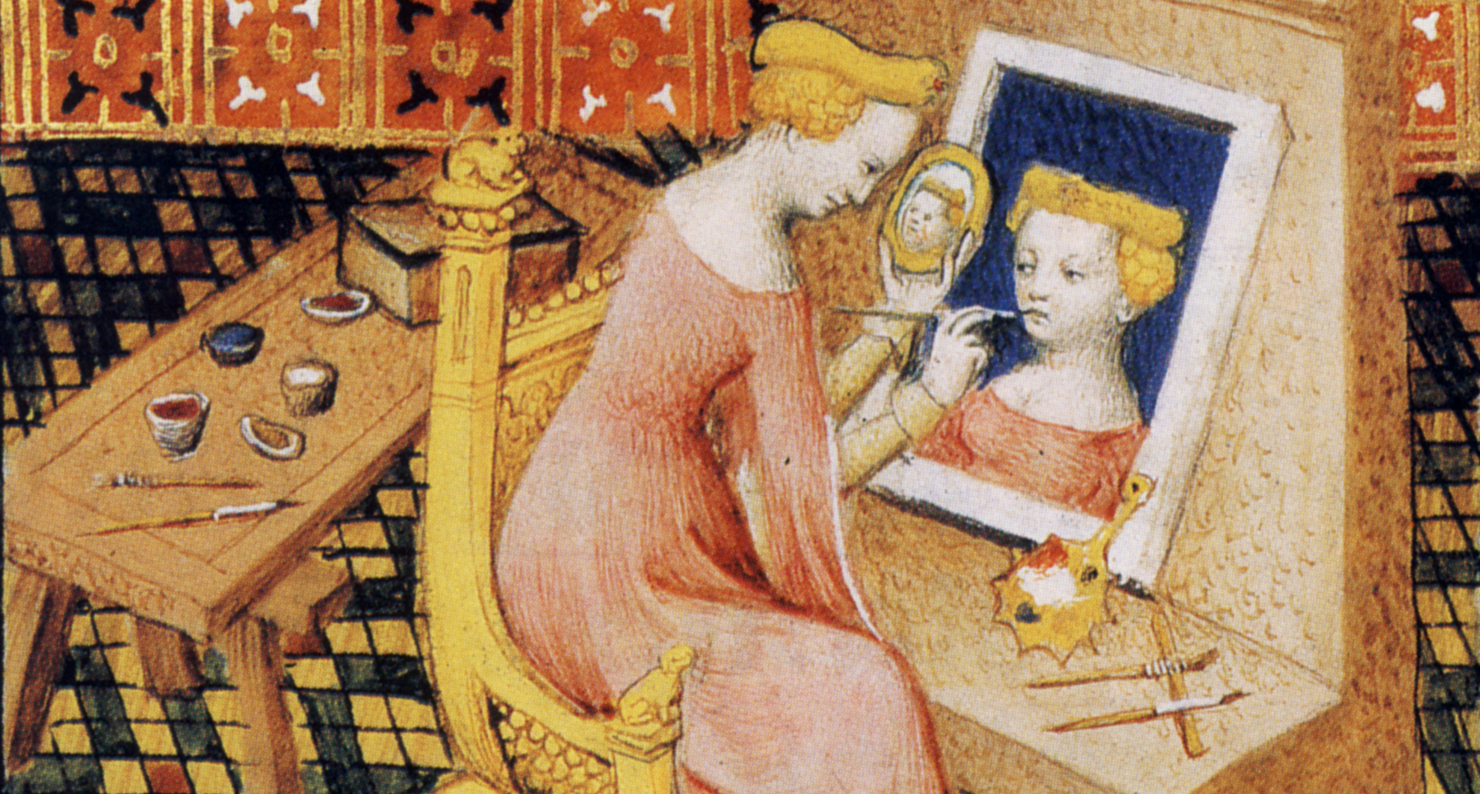 Polished metal and obsidian mirrors have existed from ancient times, and because of this, historians have usually passed over the introduction of the glass mirror as if it was just another variation on an old theme. But the development of glass mirrors marks a crucial shift, for they allowed people to see themselves properly for the first time, with all their unique expressions and characteristics. Polished metal mirrors of copper or bronze were very inefficient by comparison, reflecting only about 20 percent of the light; and even silver mirrors had to be exceptionally smooth to give any meaningful reflection. These were also prohibitively expensive: most medieval people would only have glimpsed their faces darkly, reflected in a pool of water.

The convex glass mirror was a Venetian invention of about 1300, possibly connected with the development of the glass lenses used in the earliest spectacles (invented in the 1280s). By the late fourteenth century, you could find such mirrors in northern Europe. The future Henry IV of England paid 6d to have the glass of a broken mirror replaced in 1387. Four years later, while traveling in Prussia, he paid £1 3s. 8d in sterling for “two mirrors of Paris” for his own use. His son, Henry V, had three mirrors in his chamber at the time of his death in 1422, two of which were together worth £1 3s. 2d. Although these were still far too expensive for an average farmer or tradesman, in 1500 the prosperous city merchant could afford such an item. In this respect, the individual with disposable income differed greatly from his ancestor in 1400: he could see his own reflection and thus knew how he appeared to the rest of the world.

People’s ability to appreciate their unique appearance led to a huge rise in the number of portraits commissioned, especially in the Low Countries and Italy. While almost all the oil paintings that survive from the fourteenth century are of a religious nature, the few exceptions are portraits. This trend toward portraiture grew in the fifteenth century, and came to dominate nonreligious art. As important men increasingly commissioned artists to create their likenesses, the more those likenesses were viewed, encouraging other people to have their portraits painted. Portraits invited the viewer to “Look at me!” and implied that the sitter was a man of substance, or a well-connected woman, worth portraying because of his or her status. They encouraged you to talk about these people, making them the center of attention. 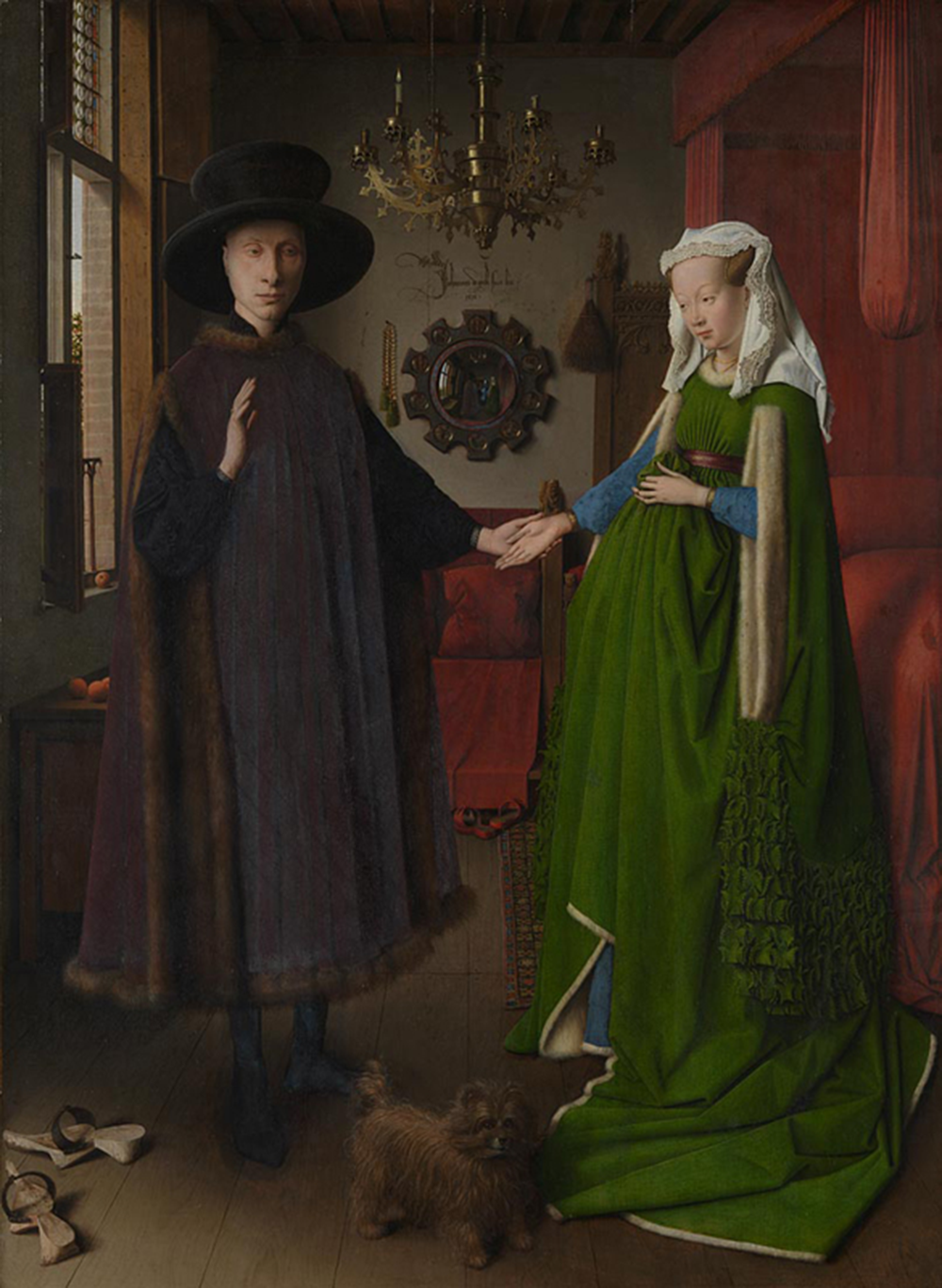 One of the most famous paintings of the century is Jan van Eyck’s Arnolfini Marriage, painted in Bruges in about 1434. It shows a convex round mirror on the back wall, reflecting the backs of the subjects to the artist. If van Eyck’s Portrait of a Man with a Turban, painted the previous year, is of the artist himself (as it probably is), then he also had a flat mirror by this date. We know from Brunelleschi’s famous experiment on perspective that flat mirrors were available in Florence at that time. After van Eyck, self-portraits abound for the later fifteenth century in Italy as well as the Netherlands. Dürer painted quite a few, culminating in the image of himself as Christ at the age of twenty-eight (1500); his introspection rivals that of Rembrandt in the seventeenth century. In such an artist’s hands, the mirror became an instrument whereby a man could start to investigate how other people saw him. Hitherto artists had only portrayed other people; now they could put themselves into the picture. And anyone who saw the intense interrogation by the artist of his own face, searching for the clues to his nature, could not help but pause for thought about his or her own identity.

All this amounts to far more than just a series of attractive pictures. The very act of a person seeing himself in a mirror or being represented in a portrait as the center of attention encouraged him to think of himself in a different way. He began to see himself as unique. Previously the parameters of individual identity had been limited to an individual’s interaction with the people around him and the religious insights he had over the course of his life. Thus individuality as we understand it today did not exist: people only understood their identity in relation to groups—their household, their manor, their town or parish—and in relation to God. Occasionally individuals stood out from the crowd in the way they wrote about themselves—you only need to think of Peter Abelard’s autobiographical Historia Calamitatum and Ulrich von Lichenstein’s starring role in his own romances—but the average person saw himself only as part of a community. This is why the medieval punishments of banishment and exile were so severe. A tradesman thrown out of his hometown would lose everything that gave him his identity. He would be unable to make a living, borrow money, or trade goods. He would lose the trust of those who could stand up for him and protect him physically, socially, and economically. He would have no one to plead his innocence or previous good behavior in court, and he would lose the spiritual protection of any church guild or fraternity to which he belonged. What happened in the fifteenth century was not so much that this community identity broke down, but rather that people started to become aware of their unique qualities irrespective of their loyalty to their community. That old sense of collective identity was overlaid with a new sense of personal self-worth.

This new individualism had a religious dimension, too. Medieval autobiographical writing is not normally about the author himself, but about his relationship with God. Similarly, the hagiographies of early medieval saints are archetypal moral stories of men and women who followed God’s path. Even in the fourteenth century, a monk writing the chronicle of his monastery or a citizen writing about his town would incorporate God into his narrative, as the important element of the story was not the community itself so much as its relationship to God. As the fourteenth century drew to a close and people started to see themselves as individual members of their communities, they started to emphasize their personal relationships with God. You can see that transformation reflected in religious patronage. If in 1340 a wealthy man built a chantry chapel to sing Masses for his soul, he would have the interior decorated with religious paintings, such as the adoration of the Magi. By 1400, if the founder’s descendant redecorated that chapel, he would have himself painted as one of the Magi. By the late fifteenth century, more often than not, just the patron’s portrait would be on display, the emblems of faith that the artist included in the painting being sufficient representation of the religiosity the patron wished to project.

The new individualism also extended to the way people expressed themselves. The letters they wrote to one another were increasingly of a personal nature; previously letter writers had restricted themselves to formalities and orders. There was now a marked trend toward writing about yourself and revealing your personal thoughts and feelings. Examples of such autobiographical writing abound in the fifteenth century: in English there is The Book of Margery Kempe in Castilian, Las Memorias de Leonora López de Córdoba; and in Italian, Lorenzo Ghiberti’s I Commentarii. Four of the earliest collections of English private letters—the Stonor, Plumpton, Paston, and Cely letters—also date from the fifteenth century. Ordinary people started noting down the times and dates of their births, so they could use astrology to find out more about themselves in terms of their health and fortune. The new self-awareness also led to a greater desire for privacy. In previous centuries, householders and their families had shared a dwelling entirely, often eating and sleeping in the same hall as their servants. Now they began to build private chambers for themselves and their guests, away from the hall. As with so many changes in history, people were largely unaware of the significance of what they were doing. Nevertheless, our vision of ourselves as individuals, not just members of a community, marks an important shift from the medieval world to the modern.

Excerpted from Millennium: From Religion to Revolution: How Civilization Has Changed Over a Thousand Years by Ian Mortimer. Copyright © 2016 by Ian Mortimer. Reprinted by arrangement with Pegasus Books. 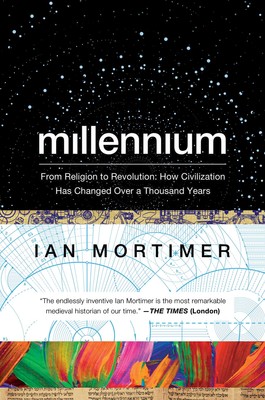 Ian Mortimer is the author of The Time Traveler’s Guide to Medieval England, The Time Traveler’s Guide to Elizabethan England, and Millennium, among other books. He is a fellow of the Royal Historical Society and a fellow of the Society of Antiquaries. He was awarded the Alexander Prize by the Royal Historical Society in 2004 for his work on the social history of medicine.