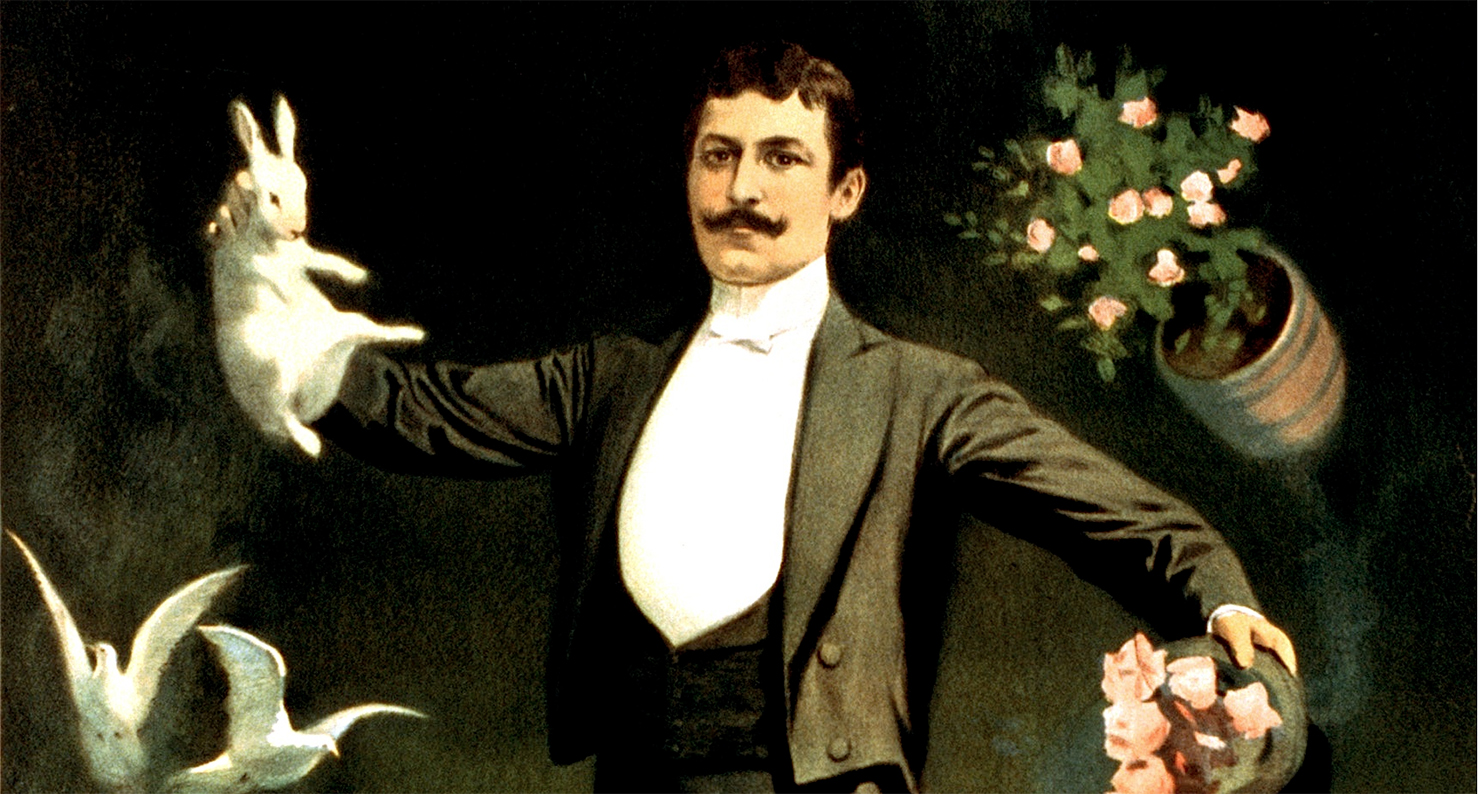 During the late nineteenth century, a nationwide obsession with stage magic left many young theatergoers wanting to impress their friends during dinner-parties—after all, a story in the Atlanta-Journal Constitution noted, “the boy who can perform a clever feat in magic, or make a neat experiment in physics, is always considered an acquisition to a company, and is popular accordingly.”

Many of these tricks were published in local newspapers. Adelaide Herrmann, widow of a famous New York magician as well as a successful stage performer in her own right, occasionally wrote a column in the New York Times detailing magic tricks that were meant to be performed at home. “When the family or friends are gathered around the fireside,” she observed, “a pleasant and instructive evening can be derived in introducing easy but perplexing magical experiments.” Other newspapers ran illusions, often called “parlor tricks,” that were aimed at wily teenagers who would not have been old enough to attend magical theatre shows on their own.

Many turn-of-the century magic acts were tinged with a hint of danger—while Houdini’s increasingly daring feats of escape would not catch on until the early teens, sword-swallowing, fire-breathing, and elaborate routines produced with the aid of toxic chemicals were commonly performed on stages nightly. At-home magic advice often presented pared-down versions of these tricks. A lack of concern for safety was apparent—one suggestion from Mrs. Herrmann advised amateur magicians to douse a handkerchief in perfume and light it on fire.

Here is a selection of parlor tricks culled from newspaper magic columns of the turn of the century, to be performed at home or at parties, likely by an unskilled teenage magician:

While at a dinner table, if there has been champagne served, a rather amusing little experiment can be performed thus: Cut a little demon out of paper and attach it to one end of a toothpick or a match, to the other end tie a piece of thread, at the opposite end of which is fastened a raisin. Now, through the center of the match push a pin, and then attach with this little pin to a cork on the bottle. Now, screen this from view by means of a napkin stretched over a couple of bottles, drop the raisin into the champagne glass. All that is now to be seen is the little demon. If the glass be now filled with champagne we will see some fun. The little globules of gas from the champagne attach themselves to the raisin, and, after a while, when quite a number have accumulated, it will be found the raisin will rise to the surface of the liquid. This causes the little demon to vanish—as soon as the raisin has reached the air the globules of gas explode and the raisin sinks to the bottom of the glass again, and once more the demon is seen.

Balance a cane on the back of a chair and bed anyone that you will make it fall without touching it, blowing on it, or moving the chair. All you need to do is to dry a card well before a fire, rub it vigorously with your sleeve and put close to the end of the cane, which will follow it, as iron follows a magnet, until, after losing its equilibrium, the cane will drop to the floor.

The trick of walking on swords can be performed with the aid of a foot bath of alum water, followed by another of very cold water. By placing the feet, thus hardened, squarely upon the swords there is no danger, though great care has to be exercised not to let the foot slide or slip on the sword, or the result will be a very bad accident.

This activity, which sounds lethal, is actually simple to carry out, this family reports. A few safety factors must be observed, of course. Children must be old enough to be thoroughly steady of hand and parents must be closely observant to prevent any crowding or jostling during the melting and spilling periods.

All that is required is a supply of small leads (dressmaker’s weights work well), a longish-handled tablespoon that can be thrown away in the morning and an active imagination. The lead can be melted in the spoon over a kitchen burner, if no more romantic source of flame is available. The trick is to spill it immediately as it becomes molten into a deep adjacent pot, filled with cold water. Along with assorted odd bits there should be one mysteriously shaped piece whose form studied carefully by all should reveal the melter’s future.