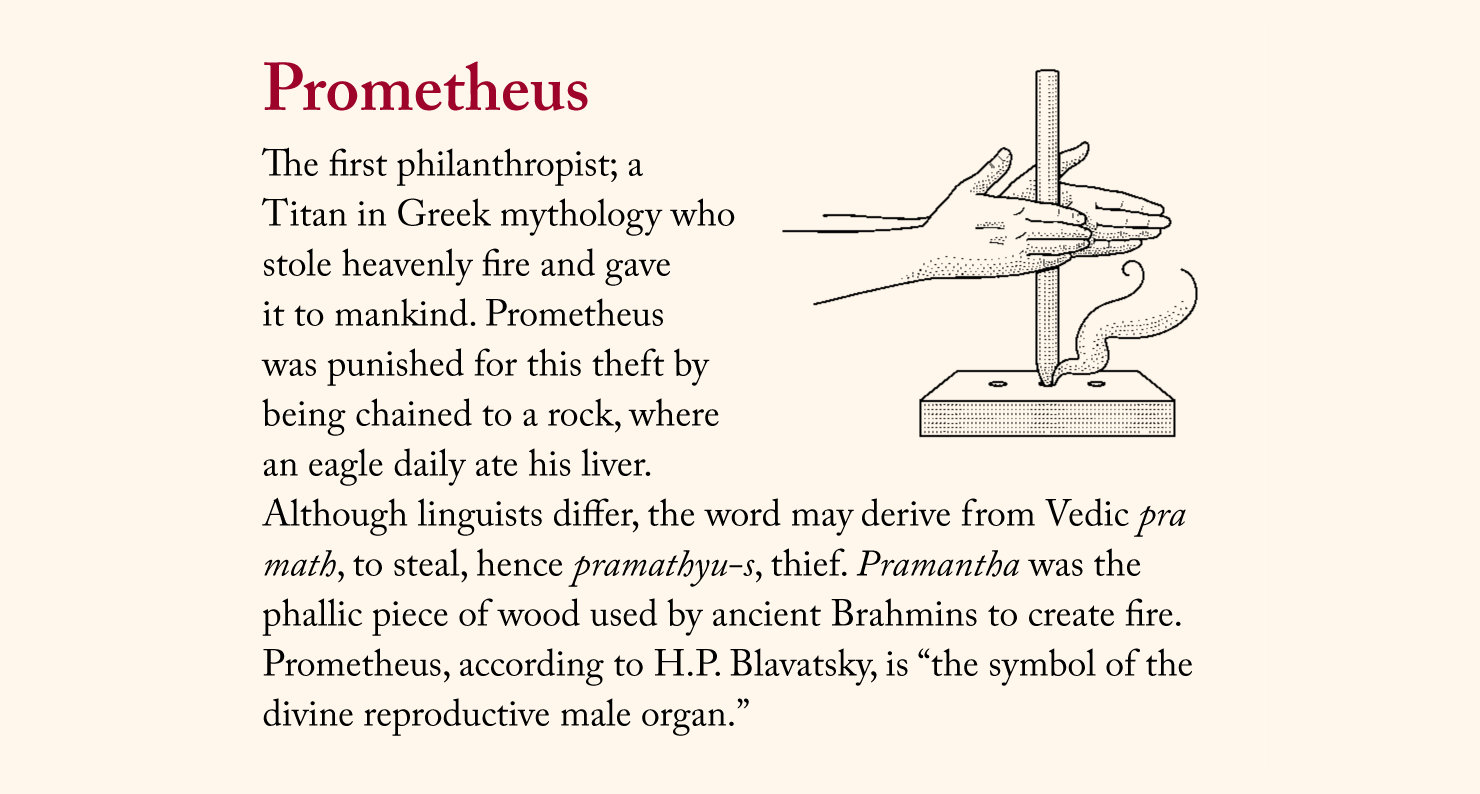 altruism: Unselfishness. Coined by Auguste Comte (1798–1857), from French autrui, “of or to others,” from Latin alter, other.

avarice: “Avarice, or the desire of gain,” wrote David Hume, “is a universal passion, which operates at all times, in all places, and upon all persons.”

daya: A fundamental virtue of Sikhism meaning “suffering in the suffering of all others.”

D.S.P.F.: Abbr. de sua pecunia fecit, Latin for done with his own money. In Rome wealthy citizens were morally obliged to fund public works; these initials were stamped along with donor’s name on public buildings or roads.

euergetism: Neologism of French scholarship used to describe voluntary gift-giving by wealthy citizens to the people of Greece and Rome. Those who distributed part of their wealth were known as euergetai.

gemilut hasadim: Hebrew for acts of kindness. In Judaism, to imitate God by showing kindness toward others.

gift: In Germanic languages, the word for poison is gift (German: Gift; Danish and Swedish: Gift; Dutch: gif, vergif). This shift may have been by influence from Greek dosis, “a portion prescribed”—“a giving”—used by Galen to mean a dose of medicine.

giri: Japanese for a social duty or obligation to reciprocate gifts or favors received (see ninjo).

larghezza: Italian for generosity or largesse. Also refers to bandwidth.

liturgy: Public office or duty rich Athenians discharged at their own expense, related either to military or festivals. Supposedly an honor, not a tax, though some Athenians found it oppressive. Using the legal procedure of antidosis, a man nominated for liturgy could name a richer citizen to perform the task. By 1593, a form of public worship, esp. in Christian church.

miser: “A wretch covetous to extremity,” according to Samuel Johnson, “who in wealth makes himself miserable by the fear of poverty.”

parsimony: Unwillingness to spend money. From Latin parsimōnia, frugality, thrift; from parcere, to spare. Lex parsimoniae is the scientific principle of finding the simplest explanation that fits evidence.

patronize: “To assume an air of superiority toward; to treat or speak about (a person, etc.) condescendingly, esp. with apparent indulgence or kindness” (Oxford English Dictionary).

philanthropiá: Originally, of gods who were benefactors to humans; divine love for humans. Earliest use, fifth century BC. By the fourth century BC, term came to mean love by humans for humankind, esp. in the sense of justice. Original meaning still in use as late as Plutarch, who said God was “not only immortal and blessed but also humane, protective and manifests philanthropiá.” 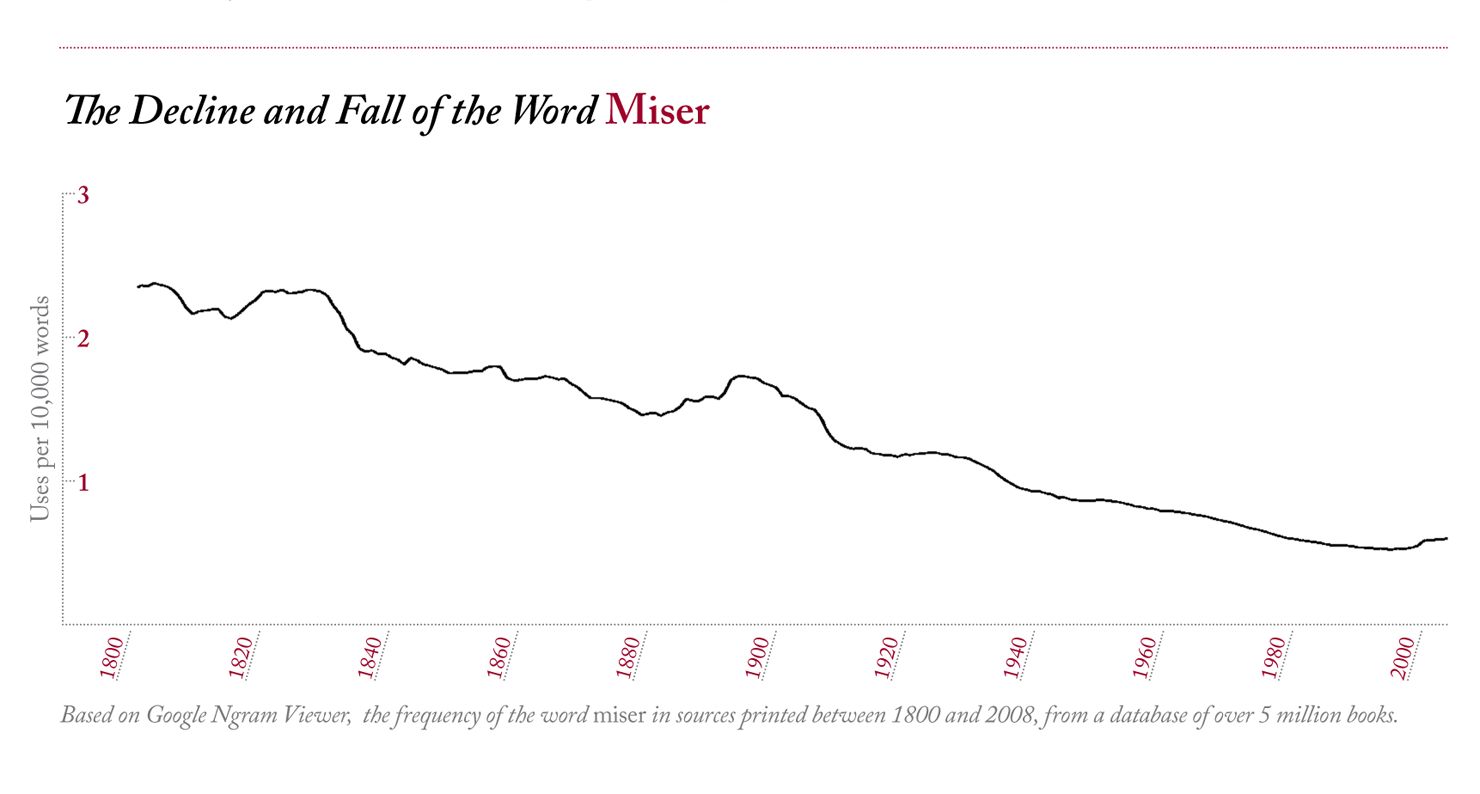 philanthropist: “A rich (and usually bald) old gentleman,” according to Ambrose Bierce, “who has trained himself to grin while his conscience is picking his pocket.”

piker: Mean and stingy person; shirker, loafer. A vagrant, esp. a gambler, who wanders along the turnpike; hence poor sport or cheapskate. Many etymologists suggest the American usage refers to people from Pike County, Missouri.

potlatch: Ceremonial feast at which possessions are given away or destroyed to display wealth and enhance prestige. From Chinook jargon patac, patac, used in the Pacific Northwest.

rén wén zhu yì: Mandarin for humanism. The word ren means both pit (as in stone of a fruit) and humaneness.

theodicy of good fortune: Trans.Theodizee des Glückes. Phrase used by Max Weber to argue that successful people feel they deserve to be fortunate and yet are not satisfied with their success. “Good fortune,” he wrote, “wants to be legitimate fortune.” “Every highly privileged group develops the myth of its natural, especially its blood, superiority.”

tightwad: A miserly person; one who keeps his wad of paper money rolled tight. Earliest use, 1900. Tightwad, Missouri (population 69), was, by one account, named by a postmaster cheated out of watermelon by a local merchant.

tithe: A one-tenth portion of property donated to church; in Leviticus: “concerning the tithe of the herd, or of the flock, even of whatsoever passeth under the rod, the tenth shall be holy unto the Lord.”

tzedakah: Hebrew for justice or righteousness; it has come to mean obligation to assist the poor.

ubuntu: Bantu for human kindness or humanness. Popularized by Desmond Tutu in proverb Ubuntu ungamntu ngabanye abantu (“A person is a person through other people”).

waqf: Arabic for endowments set aside in Islam to please God. Either religious or charitable in nature (waqf hairi) or reserved for family members (waqf ahli). The latter, sometimes used to avoid confiscation of family wealth, has been abolished in many countries.

widow’s mite: In the Gospels, a widow donates two mites, copper coins worth a fraction of a penny; wealthier citizens donate more. Jesus contends that these small sacrifices of the poor are worth more to God than large donations by the wealthy.

zakah or zakat: Arabic for the yearly tax that is required of Muslims of 2.5 percent of wealth possessed above a minimum qualifying net worth, which is known as nisab.