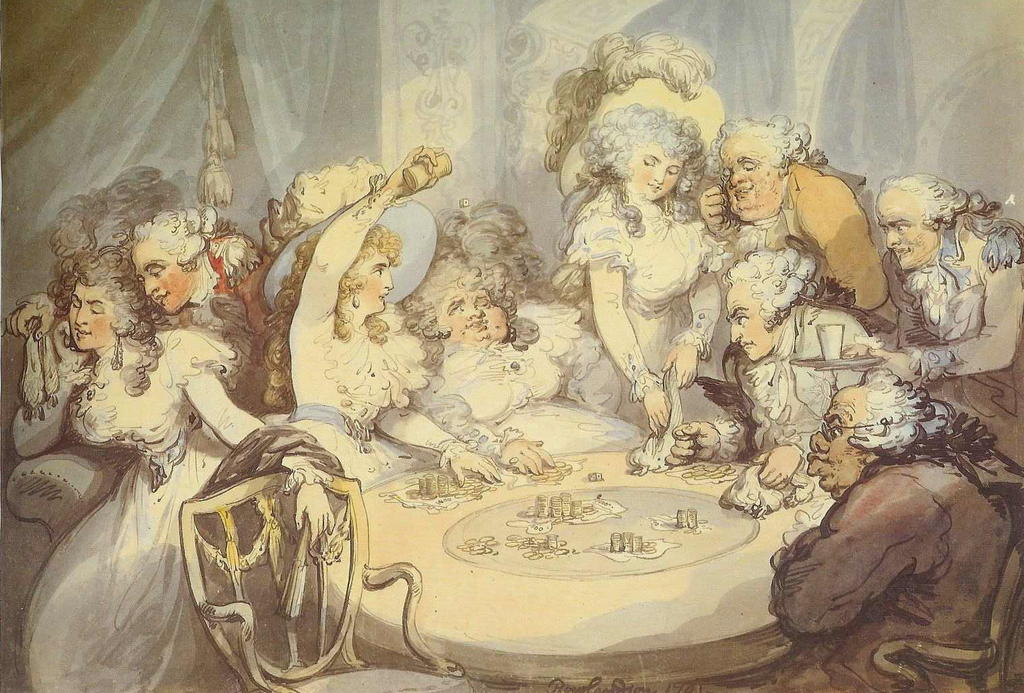 A Gaming Table at Devonshire House, by Thomas Rowland, 1791.

apophenia: The tendency to perceive connections or meaningful patterns in random data; often used in ref. to divination, as in reading of tea leaves, or Roman practice of finding meaning in entrails. (See also gambler’s fallacy.)

Bayern luck: The belief that the football club Bayern Munich frequently wins in the last minute of a match.

chance: Something unpredictable that happens without any discernible human cause. From Old French cheance, Provençal cazensa, Italian cadenza, via late Latin cadentia, falling.

depressive realism: A psychological hypothesis that claims depressed people judge their control of events more accurately than do nondepressed people.

doom: A law or ordinance, esp. in Anglo-Saxon England; unhappy destiny. “All unavoided is the doom of destiny.”—William Shakespeare, Richard III

fate: Inevitable necessity; destiny depending on a superior and uncontrollable cause. From Latin fātum, that which has been spoken.

fluke: Lucky stroke, chance hit (1857). Also flook, said to be originally a lucky shot at billiards (of uncertain origin); may be connected with fluke in ref. to whale’s use of flukes to swim rapidly. OED allows only that fluke is “possibly of Eng. dialectal origin.”

Fortuna: Goddess of luck in Roman and Greek (as Tyche) culture. Not always benevolent: she could be fickle (Fortuna Brevis), doubtful (Fortuna Dubia), or evil (Fortuna Mala). From Latin vortumna, she who turns the year about.

fortune-teller: “One who cheats common people by pretending to the knowledge of futurity.”—Samuel Johnson, Dictionary of the English Language

gambler’s fallacy: The expectation of a reversal following a run of one particular outcome (e.g., expecting a coin flip to come up heads after a run of tails). (See also apophenia.)

gris-gris: An African amulet; a small cloth bag inscribed with words from the Qur’an. Also, Louisiana voodoo term for bewitch.

happiness: From 13th cent. English substantive hap, deriving from Old Norse happ, chance or good luck. Verb happen and adverb haply (by chance) emerged from this root in 14th cent., as did happy, originally meaning prosperous. By 16th cent. the word had acquired its connotation of contentment and pleasure.

hazard: A dice game similar to craps in which chances are complicated by arbitrary rules. From Old French hasard, -art (12th cent.); compare Spanish azar, Italian la zara, azzardo, medieval Latin azardum, azarum. From Arabic al-zahr, die. William of Tyre said the name derives from Palestinian castle Hasart (or Asart), during the siege of which the game was invented. The actual name of the castle appears to have been Ain Zarba.

hex: Pennsylvania Dutch for a magic spell or curse; a witch. Corrupt German for witch.

Irish lottery: To have sex without a condom or other form of birth control.

jackal’s horn: A bony excrescence on skull of golden jackal, used as talisman; in Nepal, according to shamans, it is good for gambling.

lucktard: One whose dumb luck bails him out of any difficulties.

lucky: (Hist. and rare) A woman who brews or sells beer; a landlady of a public house or tavern (“Lady Onlie, honest lucky, brews gude ale at shore o’ Bucky.”—Robert Burns); a witch.

on the pig’s back: Irish phrase for being in luck’s way. From Rome; during reign of Twelve Caesars, a golden amulet in the shape of a pig was supposed to bring good luck.

pari-mutuel: French for a form of betting in which those backing the first three horses divide the losers’ stakes; pari, wager, and mutuel, mutual. First known use, 1872.

pothariko: Greek for good or bad luck associated with the first person to step over a threshold on New Year’s Day; the first foot.

potluck: To take one’s chances, to take whatever is available, to be willing to take whatever one is given (1592). N. Amer.: A communal meal to which those invited bring a dish to share, sometimes without arranging beforehand which dish to bring (1867).

probability: (Obs.) Worthy of approval. “Such a fact is probable but undoubtedly false.”—Edward Gibbon (1788). “This was the first view I had of living comfortably indeed, and it was a very probable way.”—Daniel Defoe (1724). First used in print in ref. to numerical ideas of randomness, 1662.

serendipity: The faculty of making providential discoveries by accident. Coined by Horace Walpole in 1754. From fairy tale (orig. Persian) “Three Princes of Serendip,” first published in Venice in 1557.

snakebit: To have or experience failure or bad luck. First use, 1957.

S.O.L.: Acronym of “shit out of luck”; state of having run out of all other options. OED also offers soldier, strictly, surely out of luck. Slang used by American Expeditionary Force in World War I (1917).

Tycho Brahe days: Days that are judged to be especially unlucky. From Swedish Tycho Brahe-dagar. After the Danish astronomer, who believed these dates were not conducive to success.