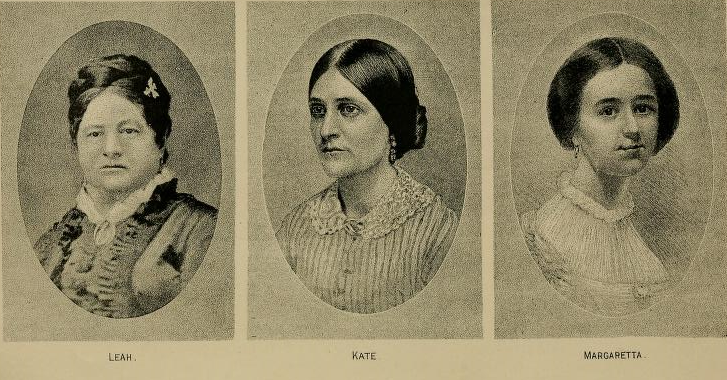 The Fox sisters, famous mediums of the nineteenth century, c. 1884.

• Famous artists, dead pets: “It would be a stretch to call Charles Dickens a visual artist, but for his distinct tribute to his cat Bob, he deserves some place in the pantheon of avant-garde creation. When the cat died in 1862, he had Bob’s paw attached to a letter opener. If one were to use the letter opener, it would be necessary to grasp the detached paw in a sort of posthumous handshake.” (Hyperallergic)

• Fact-checking The Little Mermaid with an expert on historic shipwrecks. (Atlas Obscura)

• Will the new Ghostbusters film harken a return to the female-centric Spiritualism of the nineteenth century? “Spiritualism also celebrated precisely those aspects of femininity that the rest of culture was busy pathologizing. Nervousness, erratic behavior, uncontrolled outbursts, flagrant sexuality—doctors and psychiatrists saw these all as symptoms of hysteria, that ever-elusive disease that mostly boiled down to women acting out. But these same unruly behaviors were qualities prized in an excellent medium, and women who exhibited these traits were routinely praised for their psychic sensitivity. Women who might have otherwise been institutionalized found celebrity through Spiritualism instead.” (The New Republic)

• Winston Churchill meets Henry James and is decidedly not impressed. (The New Yorker)

• Searching for Flannery O’Connor at Andalusia: “In her writing, O’Connor dwelled often on the dilemma of identity, the slipperiness of attempting to define oneself. Her solution was rigorous investigation, but even then she was able to pin down only what identity is not: ‘An identity is not to be found on the surface; it is not accessible to the poll-taker; it is not something that can become a cliche.’” (Paris Review Daily)

• How the Los Angeles Coliseum changed a neighborhood and shifted a city’s public perception. (Curbed)