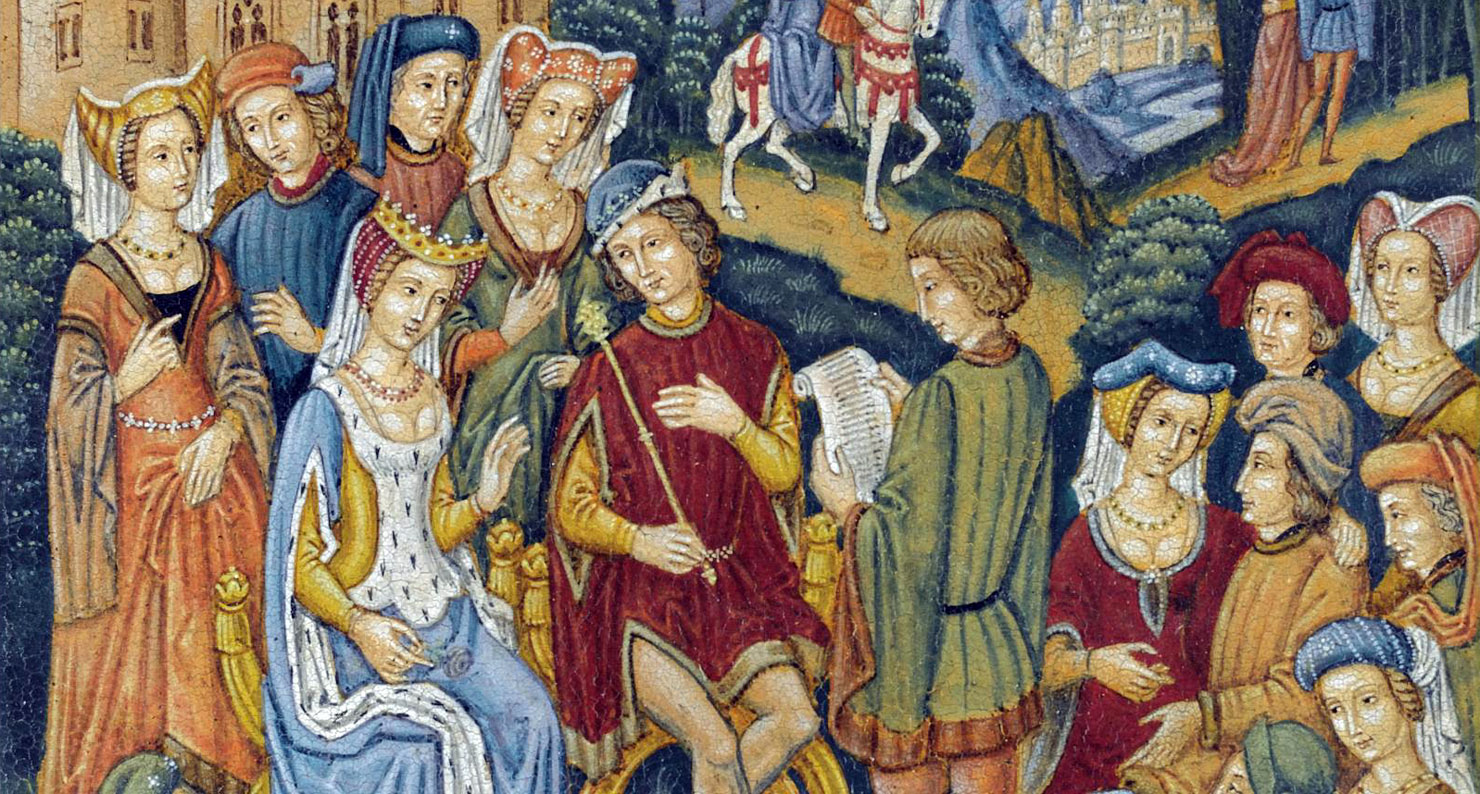 Example of the Spanish Forger, court scene with figure reading to noblemen and women, oil on panel. Sold by Sotheby’s in 2007.

In 1930, the chief librarian of the Pierpont Morgan Library, Belle da Costa Greene, was approached about a rare medieval panel painting by the Spanish master Jorge Inglés. The painting was to be offered to the Metropolitan Museum of Art’s board of trustees by its purchasing agent, Count Umberto Gnoli. The count hoped Greene would endorse the painting, which shows the betrothal of Saint Ursula, and recommend that the board acquire it. But the painting appeared suspect to Greene; there was something riotously decorative about it. It’s a busy scene: in the foreground a semicircle of figures are arranged in brightly colored and elaborate clothing, many holding theatrical poses of coyly cocked heads, extended feet, and lifted heels. In the center stands Saint Ursula—one tiny, sharp-toed slipper poking out beneath an expanse of ermine and deep-folding blue fabric. Out of her ermine bodice, an equally expansive bosom spills. Her face has a long aquiline nose, neat little cherub’s bow mouth and rounded chin. In the background, lollipop trees with spindly trunks and flat foliage grow up around quaint little castles perched on the edge of an unconvincingly mobile, blue lake. For a medieval painting, something looked off to Greene. The panel bore the marks of age—several long, vertical cracks punctured its surface. But one of them, which might have sliced through a central figure, mysteriously stopped short, halfway down the panel. The Betrothal of Saint Ursula was a too-perfect version of the imperfections of the medieval.

What Greene had detected was the work of one of the most audacious and skillful forgers in the history of medieval art. She named the trickster the “Spanish Forger” because the piece was the supposed work of Jorge Inglés. Greene was the first scholar to collect and analyze the Forger’s works. Nine years after her initial identification, she compiled a list of his known works. It was fourteen items long. At the most recent estimate, however, his works are now thought to number around 350 images. Although the list contains some panel paintings, like the emblematic Betrothal of Saint Ursula, the majority of what he produced was manuscript forgery—mainly single leaves or miniatures. 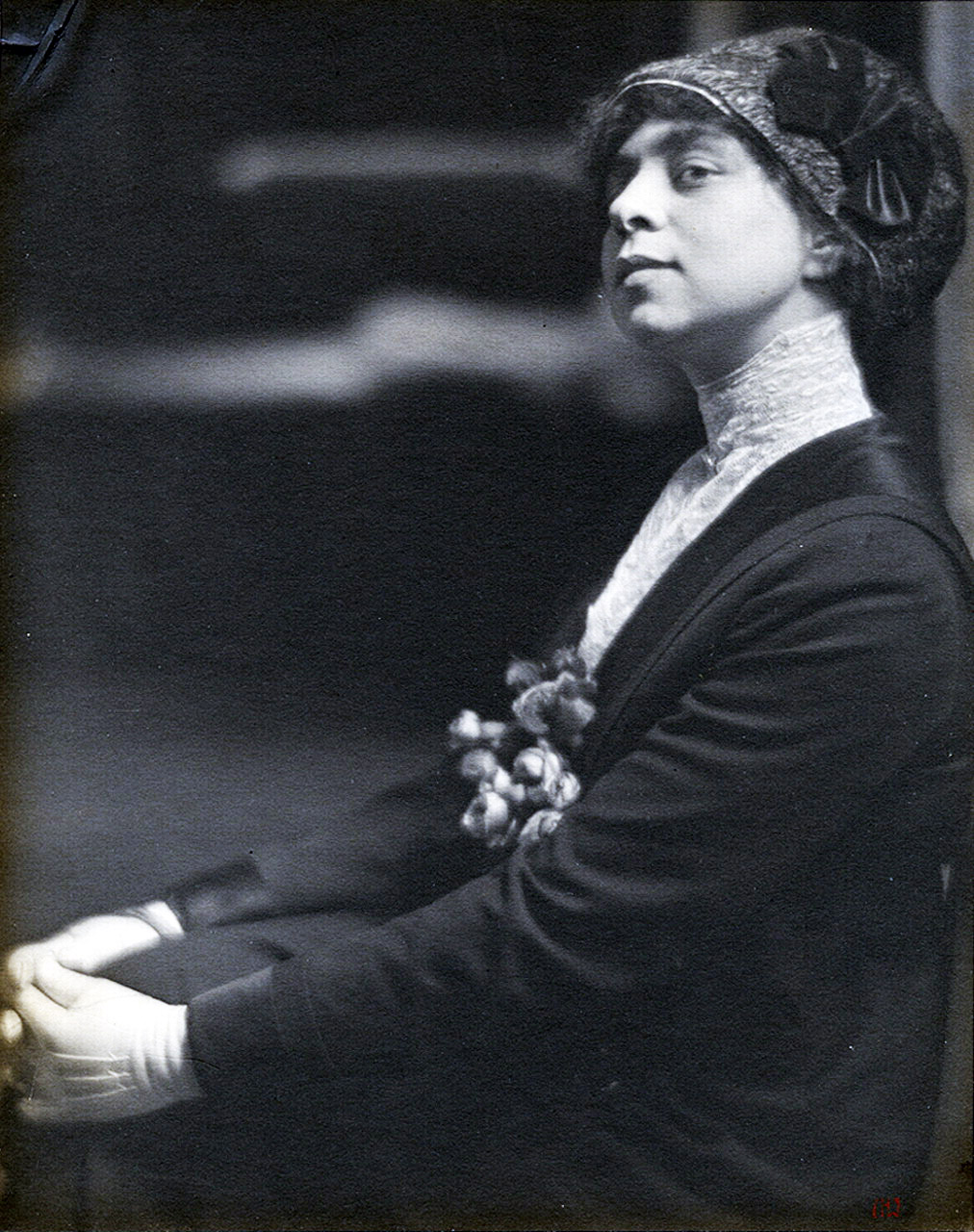 As she began to unravel the web of the Spanish Forger, Belle da Costa Greene was pulling off a successful masquerade of her own. Greene was in fact born Belle Greener, daughter of African American parents of mixed heritage. Her father, Theodore Greener, was the first African American graduate of Harvard. At some point in her early adulthood, Belle changed her name from “Greener” to “da Costa Greene,” and invented a Portuguese grandmother to explain her dark complexion. It was the beginning of her new life as a white person. (After separating from her father, her mother would do the same, changing her maiden name to “Van Vliet” to appear Dutch.) Like Coleman Silk in Philip Roth’s Human Stain, who decides “to take the future into his own hands rather than to leave it to an unenlightened society to determine his fate,” Belle set out to determine her own fate in a world of prejudice. She trained as a teacher and then a librarian, getting a job at the Princeton University Library. It’s a testament to Greene’s courage that she achieved this: in the 1930s an alumnus of Princeton wrote from his home in Missouri to the college’s president enthusiastically telling him that “one of the reasons Princeton is so popular here is that it is the one Eastern school that does not enroll negroes.” While she was working at Princeton, she met student Junius Spencer Morgan II, who introduced her to his uncle, John Pierpont Morgan. Morgan hired Greene in 1905 to be his chief librarian, and she would hold this job for 43 years, later becoming director of the Morgan Library. She became a figure of fascination among his set, her gender and her exotic looks seemingly at odds with the fusty world of codicology. In 1921 the Chicago Daily Tribune ran a profile of Greene in which it said “she wears her hair long and does not wear glasses, runs to Europe on secret missions and is the terror of Continental collector’s agents. Her name is Belle Green [sic].” And it was in this public role that she came to encounter the works of the Spanish Forger.

To this day little is known about the Spanish Forger, who is still known by the name Greene gave him. He was likely not Spanish but French, living and working in Paris at the end of the nineteenth and the start of the twentieth century. At this time, Paris was the cradle of modernism and fauvism, and yet somewhere in the same city, a determined painter realized that a saccharine vision of a frozen Middle Age would reach a receptive bourgeois market. While the avant-garde embraced so-called primitivism as a way to explode the boundaries of accepted art, the Forger’s artificial archaism exploited the bourgeois art collector’s nostalgia for tradition.

The Spanish Forger presents us with a view of how the nineteenth century conceived of the Middle Ages—an era of chivalry and courtly love, rather than a time of sober Christian faith and high mortality rates. Although he painted many religious scenes, the majority of what the Forger made was secular—jousts, feasts, hunts, gardens, musical recitals. Leafing through the catalogue of the Forger’s works, his personal sensibilities and cultural biases are immediately apparent: every nobleman is outfitted with a hawk about to take flight; every noblewoman is encumbered by pneumatic breasts that bulge from over-laced bodices (“you can always tell a Spanish Forger by the boobs,” an expert once explained to me); dragons and unicorns are as commonplace as dogs and cats. The fight between the Old Testament David and Goliath becomes a battle between chivalric knights in flashing armor, and naked saints subjected to torture cover their genitals with their hands in a sweetly Victorian gesture. 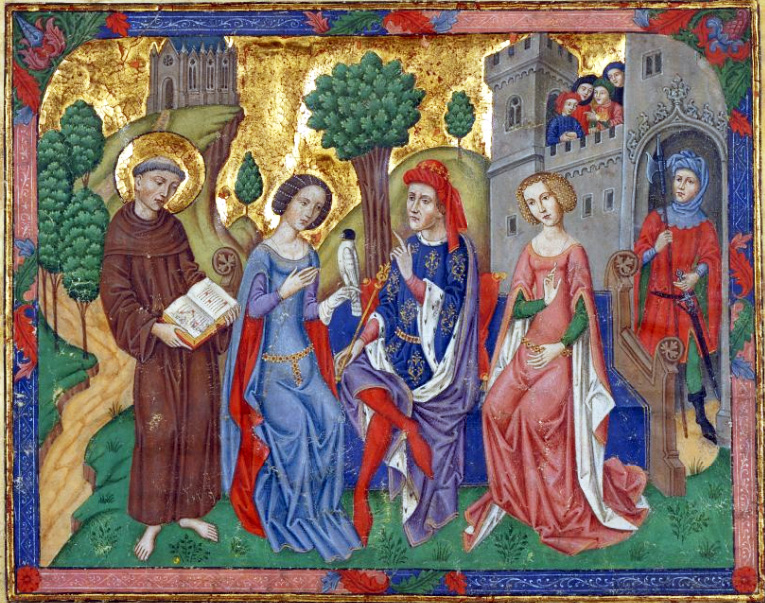 Despite the idiosyncratic quirks of his work that mark him out today as an obvious fraud, the Spanish Forger was meticulous and skillful. So meticulous that he even took in Belle da Costa Greene more than twenty years before she would unmask his fraud. In 1909, Greene unwittingly acquired an antiphonary for the Morgan library into which the Forger had added donor portraits. The Morgan was far from the only victim. The Spanish Forger made it into the collection of Metropolitan Museum of Art (an illuminated manuscript showing the visitation of Mary was donated as part of a bequest in 1930, the year of his unmasking), and major and minor collections across the world would acquire his work in this period.

The Forger’s method was studied; he based much of his work on the images found in the popular five-volume Art of the Middle Ages and the Renaissance, published in 1847 by Firmin Didot. In an age before photographic reproduction, this book brought the visual treasures of the medieval world to a mass market for the first time. The edition was full of chromolithographs, a process for color reproduction invented in the nineteenth century whereby artists made copies of images on a zinc plate, and then applied chemicals to build up layers of printed color. The Forger was adept at copying images, modifying, and reversing them—the exact skills required to be a chromolithographer. It’s possible that this was the Forger’s profession for a time, and evidence from the publisher’s archive points toward his being an associate of Firmin Didot.

Still, the Forger was not always historically accurate. He spliced together late fifteenth-century Italian spatial models with conventions from French and Flemish panel painting and made incongruous unions of fifteenth- and sixteenth-century modes of dress. As for his technique, the Forger was always careful to paint his works on medieval vellum or panel. He most often took medieval liturgical books, cut sections from them, scraped off any text beneath and began work. Eagle-eyed scholars today note the disjunction between text and image: secular scenes painted into what was once a religious service book. Sometimes the paint would flake off, revealing the telltale used vellum beneath; in the medieval period, the vellum used for these luxury books would invariably have been new. When the Forger used gold leaf, he made the error of applying it at the end, while in the medieval period it was usually applied first. And while he used medieval vellum, a telltale sign of his forgery was that he painted using modern materials. In places he used copper arsenite pigment, known as Paris Green, which was not available before 1814. A leaf in the Morgan Library containing this pigment was subjected to neutron activation analysis in the 1970s. The process involves making the leaf radioactive for a short time. The areas painted green disappeared, leaving the ghostly image of the gold sections. The more rapid rate of decay in the green areas indicated the presence of copper arsenite.

Today the Spanish Forger’s works command a high price in the collector’s market, and are more valuable unmasked than they would be as undetected fakes. In 1978, the Morgan held an exhibition of his work. In 1998, Christie’s sold an entire forged choir book for nearly $30,000, almost three times its estimated price. In 2009 the Victoria and Albert Museum in London acquired a set of five pieces by the Spanish Forger valued at over $30,000.

Mary Wellesley is a former research affiliate at the British Library, where she still teaches medieval language and literature. A frequent contributor to the London Review of Books, she completed her PhD at University College London. She is the author of The Gilded Page: The Secret Lives of Medieval Manuscripts.