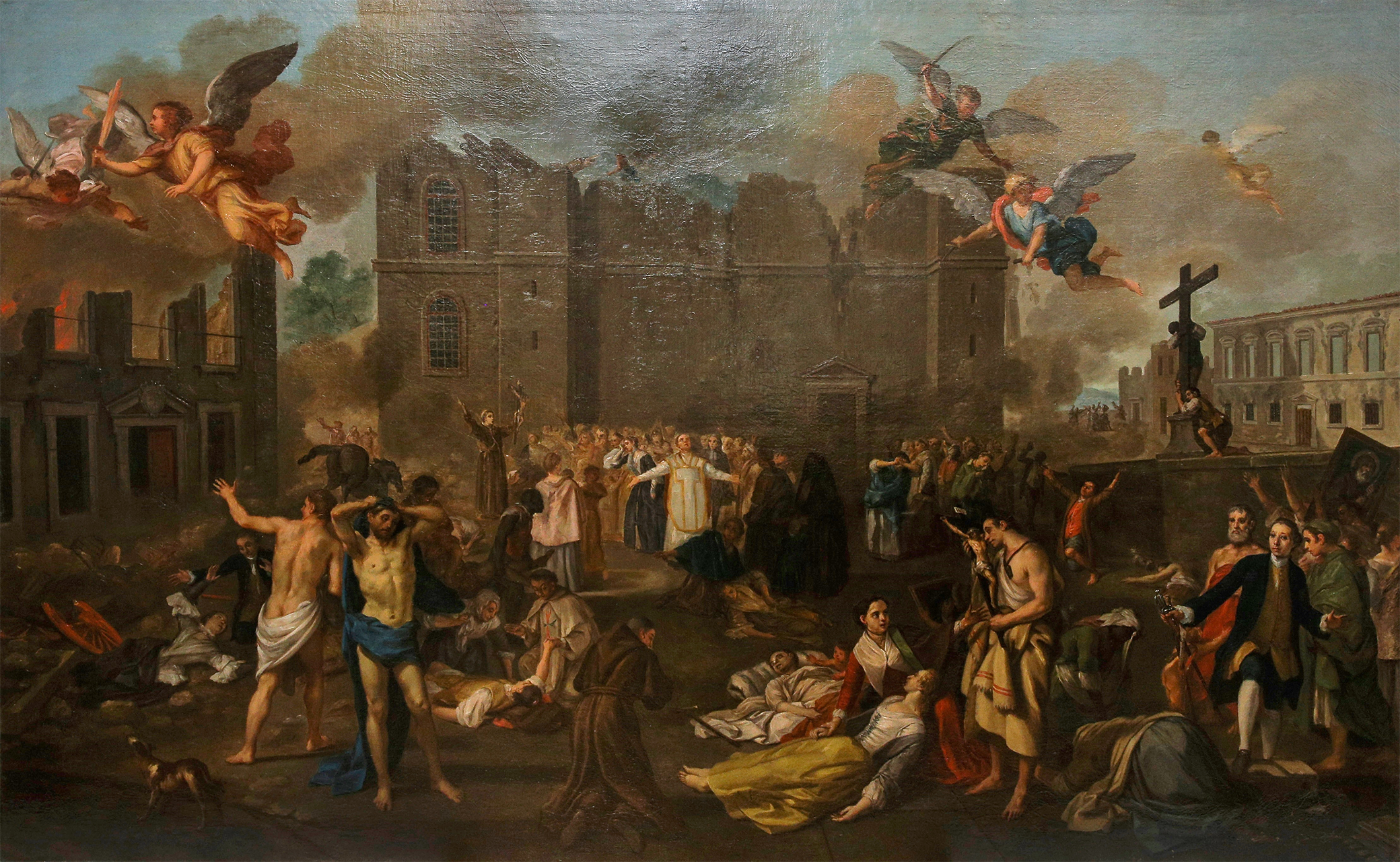 On the morning of November 1, 1755, an earthquake rocked Lisbon, the Portuguese capital and a bustling port city of roughly 275,000 people. As buildings collapsed, flames from hearths and candles ignited a massive fire that burned for a week, devouring much of what the quake itself had spared. Meanwhile, not long after the last tremors ended, a tsunami—the largest in history, reaching speeds of up to fifty miles per hour—engulfed the ruined city. When it was all over, as many as 40,000 people had perished in Lisbon and its environs, though some contemporary estimates of the death toll were much higher. Thousands more died in nearby Spain and northern Africa. Rumbles from the earthquake and its aftershocks were felt throughout Europe, as far north as Scandinavia. Many believed that the tremors that shook Massachusetts, which made the house of John Adams’ family “rock and reel and crack as if it would fall in ruins about us” seventeen days later, were somehow related to the earthquake in Portugal. The range of the tsunami from the Lisbon earthquake was similarly impressive, affecting tides in the Americas and causing floods on several Caribbean islands.

The cultural impact of the Lisbon earthquake was nearly as extraordinary as the physical wreckage it caused. Often called the first modern disaster, the great Lisbon earthquake gave rise to vigorous investigations of its causes, with empirical observations and scientific knowledge informing the ambitious rebuilding of the ruined city that was undertaken and financed by Portugal’s royal government. The horrific and widely publicized Lisbon disaster also led to the first international relief effort in world history.

By the time Lisbon was reduced to a pile of smoldering rubble in November 1755, learned men had been accumulating information about earthquakes for roughly two millennia. The ancient sages Aristotle and Seneca had written about earthquakes, as did medieval monks, who included accounts of them in their chronicles. In 1580, shortly after tremors occurred in southern England, resulting in the closing of theaters and other pious efforts to eradicate sinfulness, the Reverend Abraham Fleming appended the first published catalogue of English earthquakes—he knew of seventeen in all—to a treatise that he wrote to encourage repentance. By 1750, when a series of unusually powerful earthquakes shook London, descriptions of seismic events were so plentiful that another English clergyman, Zachary Grey, was able to produce A Chronological and Historical Account of the Most Memorable Earthquakes: That Have Happened in the World, from the Beginning of the Christian Period to the Present Year and its sequel, A Farther Account of Memorable Earthquakes, published six years later. In all, Grey, who unequivocally characterized earthquakes as divine portents, enumerated and described a total of 167 earthquakes and tremors that had occurred on four continents. 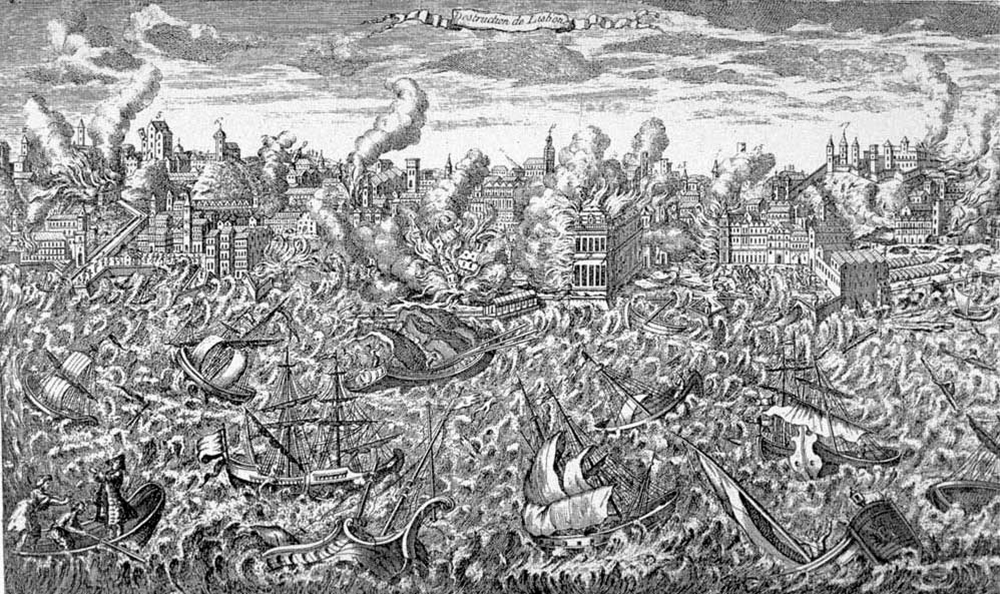 Because earthquakes were sudden, impossible to predict, and comparatively rare—at least in Europe—they especially elicited discussions about the relationship between God and the physical world. For example, the popular General History of Earthquakes, first published in two London editions in 1694 and reissued as late as 1734, combined science with providentialism, but leaned strongly toward the latter. The author began his book by briefly reviewing the possible physical or “Natural” causes of earthquakes before devoting the remainder of his 177-page treatise to recounting stories of specific earthquakes and speculating as to what provoked the wrath of the Almighty in each of these instances. The author concluded his book by denouncing ancient “Heathen Philosophers” who had believed that earthquakes were inescapable and thus meaningless while praising Christian writers who interpreted earthquakes as “punishments of [human] sins and enormities inflicted…by Divine Justice.” Why would God cause earthquakes if not to punish sinful people? “Let us then conclude,” he declared emphatically, “that Earthquakes are the Effects of Sin.”

The ruinous earthquake in Lisbon caused a flurry of empirical activity, beginning with the circulation of detailed questionnaires—by the government in Spain and by the church in Portugal—to gather information about its timing and impact. It also dramatically intensified scientific inquiry into the causes of earthquakes, as scientists across Europe posited theories and Professor John Winthrop of Harvard College produced his Lecture on Earthquakes. Public interest also increased in the aftermath of the Lisbon debacle. Scientific theories about the causes of earthquakes appeared not only in the journal of the Royal Society but also in the popular press. Scientific treatises and empirical descriptions of what happened in Lisbon dominated the pages of the Gentleman’s Magazine, where they far outnumbered essays that approached the earthquake from theological or moral perspectives. 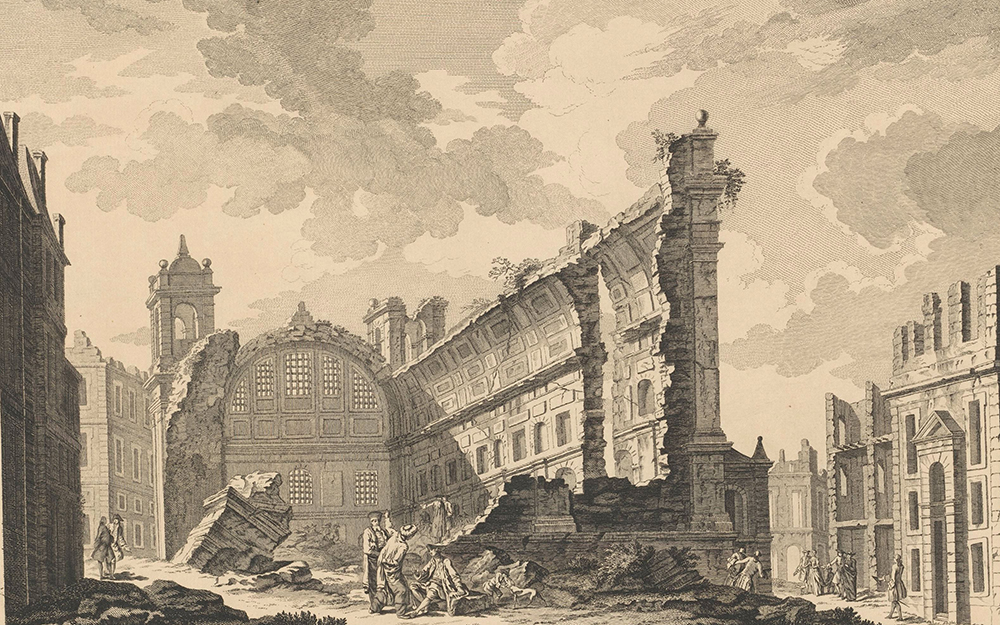 Serious scientific inquiry into the causes of earthquakes did not necessarily signal a decline in religious belief but rather the increasingly standardized use of a language of empiricism and observation to communicate scientific knowledge and discovery. The Englishman John Michell, whom some regard as the father of modern seismology, is a case in point. Michell was the first to argue that the earth was composed of strata or layers, which amounted to an initial step in understanding plate tectonics, the way of understanding earthquake causation that became prevalent only in the mid-twentieth century. Taking issue with those who believed that electrical currents caused earthquakes, Michell argued instead that subterraneous fire, water, and vapor caused the earth’s strata to shift, which, in turn, caused seismic activity. Michell never mentioned God or providence in his writings, but he, like roughly one in ten members of the Royal Society, was an ordained minister of the Protestant Church of England. John Winthrop of Harvard was not a clergyman, but he featured a quotation from another Anglican minister, William Derham, author of Physico-Theology, on the title page of his Lecture on Earthquakes. “Subterraneous caverns and volcanos, if well considered,” wrote Derham, “will be found to be wise contrivances of the Creator, serving to great uses of the Globe, and ends of god’s government.” 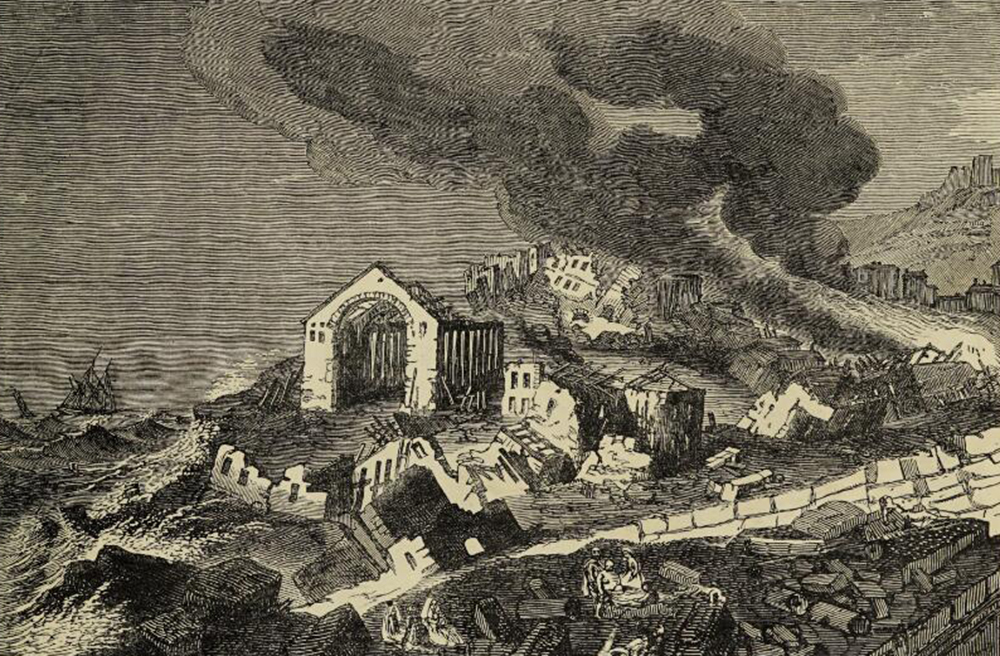 In important ways, both scientists and clergy focused on the future, not the past, parsing the physical and providential causes of the earthquakes and their significance for survivors. Scientifically minded observers like Michell and Winthrop hoped to understand the causes of earthquakes either to render them more predictable or to enhance the ability of humans to limit the physical wreckage that future quakes might cause. Clergy of various theological stripes sought to draw moral and religious lessons from the death and devastation to inspire the living to repent, reform, and thereby attain salvation in their eternal lives.

By contrast, another group of voices in the aftermath of the Lisbon earthquake focused on the present by privileging the victims, describing their pain and suffering in ways that both replicated and expanded affecting portrayals of victims of shipwrecks and other more pedestrian calamities. Voltaire, who was profoundly shocked by the Lisbon disaster, was the most self-conscious advocate of this distinctly modern perspective that emphasized the human costs of calamity, insisting that the only ethical response to Lisbon was to mourn the dead, ease the pain of the wounded, and help the sufferers to rebuild their city and their lives. While Voltaire’s most famous work, Candide, used humor and satire to inspire both sympathy and outrage, his earlier Poem Upon the Lisbon Disaster was a more angry and mournful rumination on the human costs of the earthquake and a forceful rejection of the view that “God, in His bounty, urged by a just cause,” by the earthquake “exhibits His eternal laws.” Voltaire’s verses vividly described the excruciating fate of Lisbon’s innocents:

Women and children heaped up mountain high,
Limbs crushed which under ponderous marble lie;
Wretches unnumbered in the pangs of death,
Who mangled, torn, and panting for their breath,
Buried beneath their sinking roofs expire,
And end their wretched lives in torments dire.

Excerpted from Inventing Disaster: The Culture of Calamity from the Jamestown Colony to the Johnstown Flood by Cynthia A. Kierner. Copyright © 2019 by the University of North Carolina Press. Used by permission of the publisher. 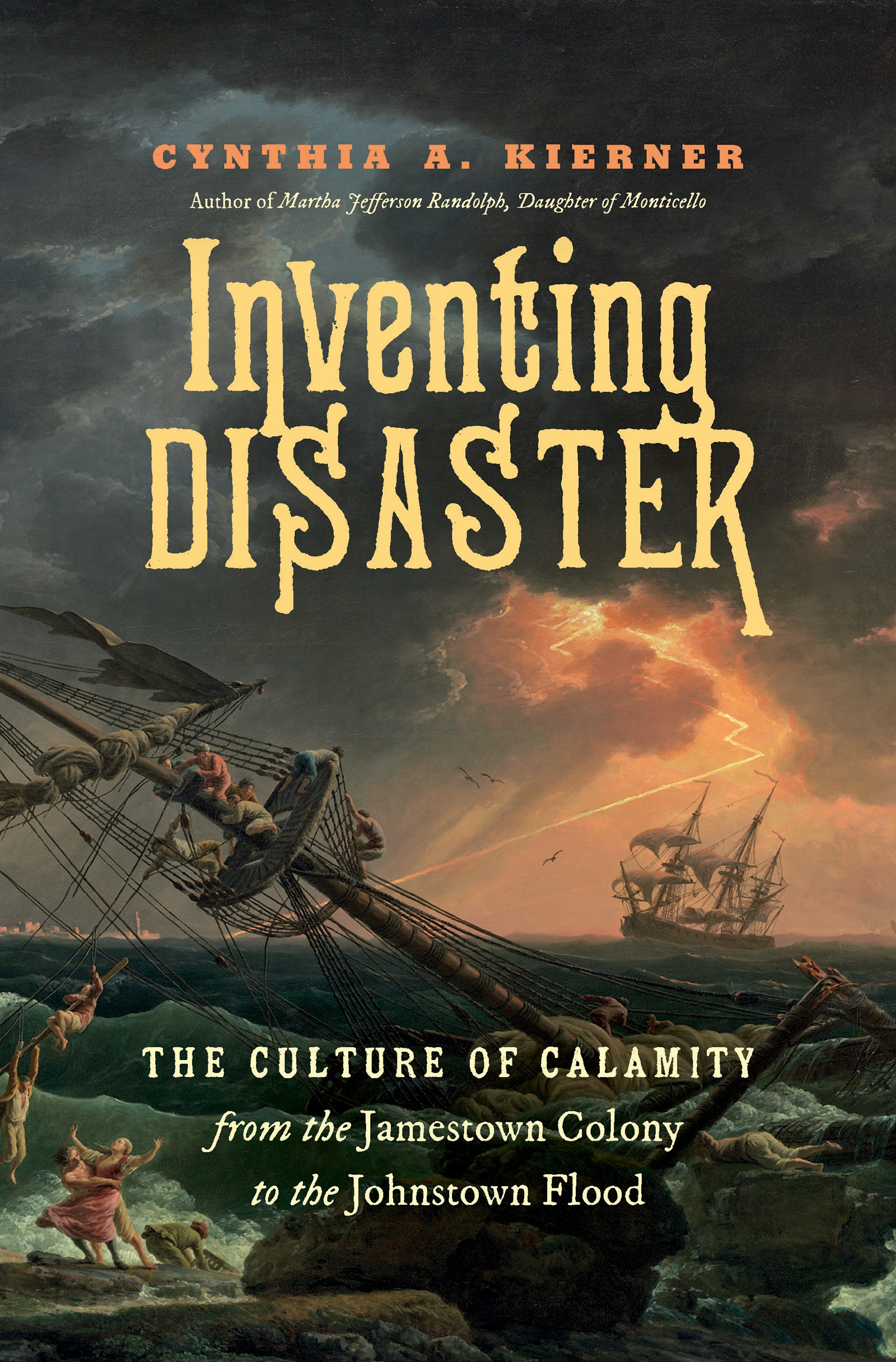 Cynthia A. Kierner is a professor of history at George Mason University and the author of Inventing Disaster: The Culture of Calamity from the Jamestown Colony to the Johnstown Flood and Martha Jefferson Randolph, Daughter of Monticello, among other books.