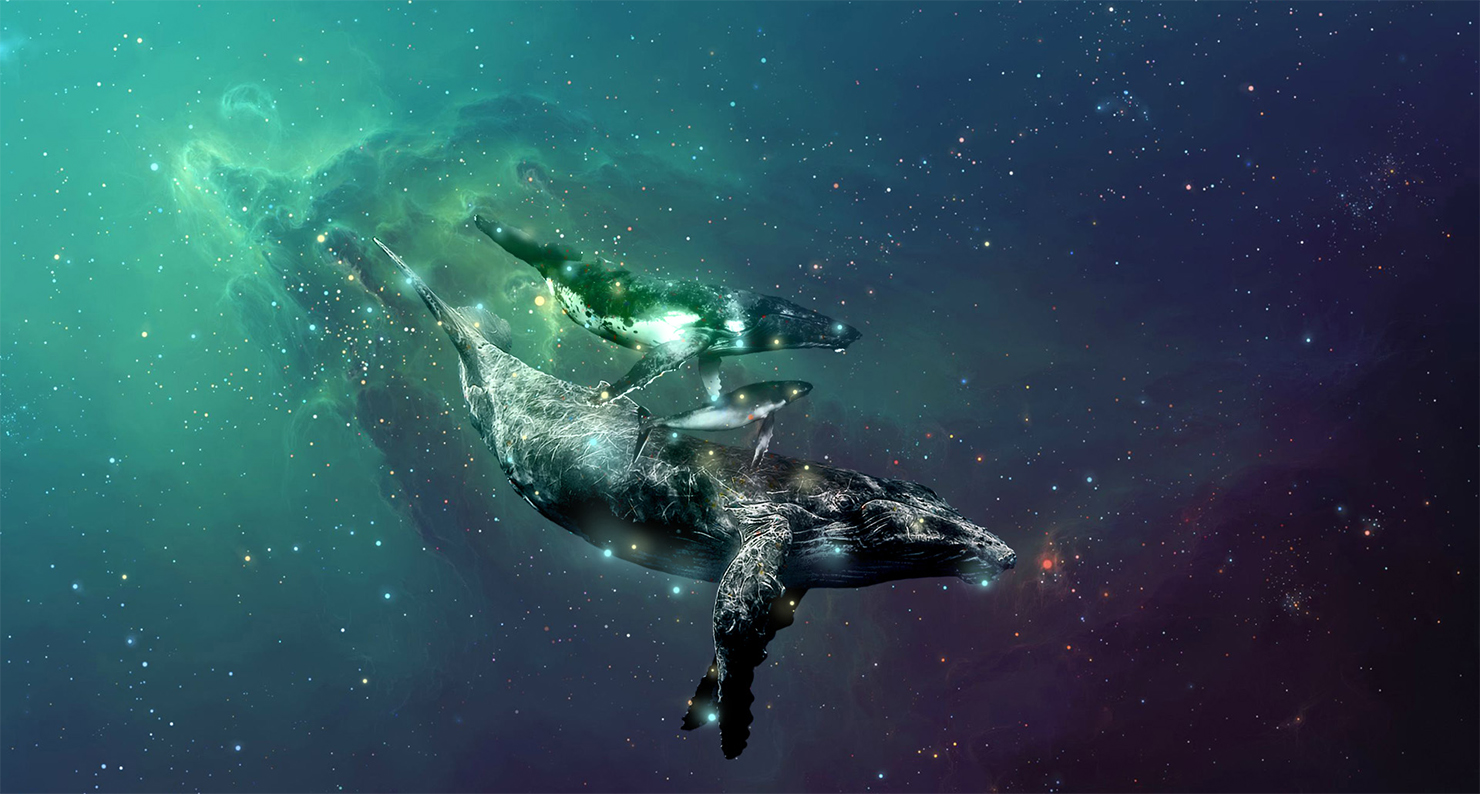 You’ve probably seen the art of Christian Reisse Lassen on the wall of a dorm room or a head shop. His paintings, bearing mystical titles like Ancient Mysteries, Parentheses in Eternity, and The Great Answer, are rendered in tones of blue and purple. Lassen paints saturated marine creatures—especially dolphins and whales—in ocean habitats that merge with a starry, perfect sky above. In some paintings, the marine mammals fly through space itself, leaping across heavenly bodies.

Lassen’s work is a refined—and lucrative—example of the popular “space whale” art of the 1970s. The trope of the flying cetacean has spawned countless posters, Trapper Keepers, and video games, and thanks to the Internet, it’s now possible to see many examples of art featuring space whales. In images both clumsy and refined, the space whale (and its cousins the space dolphin, the space orca, the starwhal, and the space squid) float through the void of the sky.

To fans of space whales, these scenes pack heavy meaning. There is a bigness, infinity, and possibility in both space and the ocean. The whale is also big, and its ways mysterious, but its presence in the void has a way of concentrating those intimidating qualities, serving them up to the viewer in a legible way. As fantasy artist Marianne Plumridge wrote of her composition Spotting Starwhales II: “[The whales] represent ‘life’ and its journey through the realms of time and space. A higher consciousness. Greatness…the ‘something better in all of us’ to aspire to.”

Are the cosmic swimmers a fantastical tribute to the possibilities deep in our own ocean? Or are they a radical act of human arrogance—yet another superimposition of our own fears and hopes upon another species, as we extrapolate an animal from its environment to suit our own fancy?

The space whale was born at the tail end of two hundred of the worst years in the history of cetacean-human relationships. Like other charismatic megafauna, the whale went from threatened to idolized with dizzying speed. The early-nineteenth-century whaling vessels that were the setting for Melville’s Moby-Dick took whales for their oil, their baleen, and their bones. This process reduced the huge creatures, as biologist Joe Roman observes in his book Whale, to “a stamp in a [ship’s] logbook, the number of [oil] barrels inscribed on its flank.” No sooner had the discovery of petroleum, the decline in corsets’ fashionableness, and the Civil War’s disruptions combined to relieve the pressure on the whale population than the invention of new kinds of harpoon technology put new populations of whales at risk.

In the 1960s and 1970s, the country’s ongoing fascination with space, which (arguably) began with the popularity of “rocketman” television shows in the 1950s, coincided with burgeoning environmentalism. (Rachel Carson’s The Sea Around Us was a bestseller in 1951.) Photographers and filmmakers like Jacques Cousteau and James Hudnall published new images of whales in their underwater habitats, and nature writer Victor B. Scheffer had a hit in the popular book The Year of the Whale.

Meanwhile, science fiction increasingly linked space exploration with psychedelic mind-expansion—a theme that fit with the implications of the new research on dolphin and whale communication. In 1971, Roger Payne and Scott McVay published the results of ten years of research into the patterns of humpback whale songs, and the public heard their recordings for the first time—the album of these recordings sold more than 100,000 copies on vinyl throughout the 1970s.

Science had found evidence of ongoing communication in a completely unexpected place. Sure, the thinking went, space appears “empty” from our perspective, just as the oceans once seemed quiet. But there could be whole worlds out there beyond our current comprehension. People who were interested in dolphins and whales were often also interested in the possibility of extraterrestrial life. Some even thought that dolphins and whales could secretly be aliens, sent long ago to live in earth’s oceans and serve as intermediaries between humanity and other interplanetary intelligences.

From the 1970s onward, space whales have appeared in film, television, video games, comics, and music. One of the unsung films in the series, Star Trek IV: The Journey Home (1986) was a love story of sorts to space whales. Kirk and Spock are charged with traveling back in time to locate a pair of now-extinct humpback whales, whose whale song is the key to saving the universe. (For an exhaustive log of pop-cultural space-whale sightings, see the TV Tropes page on the topic.)

Some fictional space whales, like the Acanti—who appear as part of the Marvel Comics Brood story arc—are knowledgeable, venerable, and wise. Some are threatening, as is the whale Abraxas in Rick Veitch’s graphic novel Abraxas and the Earthman, who is eventually revealed as fundamentally noble when freed from human tortures. Occasionally, though not often, space whales are written as malevolent beings, ready to take revenge on humanity for wrongs done back on Earth.

The best stories about spaces whale ask big questions about our fixation on directing, controlling, and understanding cetaceans. In Alexander Jablokov’s 1992 sci-fi novel A Deeper Sea, a tormented Russian scientist, who drafted dolphins as soldiers in human wars, becomes convinced that a whale and a dolphin are the pre-ordained interpreters who will allow humans to communicate with alien intelligence living near Jupiter. By creating a cyborg “whale” to survive in Jupiter’s atmosphere, the scientist accomplishes his feat only by deceiving the robotic whale into believing that he is still swimming in an Earthly sea.

De Witt Douglas Kilgore argues that post-WWII science fiction used the narrative locations of outer space to propose the healing of racial divides and social problems, applying American faith in technology and the endless frontier as a salve to the wounded body politic. As Jablokov’s sharp, self-aware critique of the concept shows, space whales do the same for critical issues of environmental threat. The space whale combines two or three potent sources of wonder: the sky, the ocean, and the very large mammal. Can too much wonder poison the well of environmental concern, substituting fantastic speculations for real-life danger?

Rebecca Onion is Slate’s history writer and runs the site’s history blog, The Vault. She lives in Ohio.