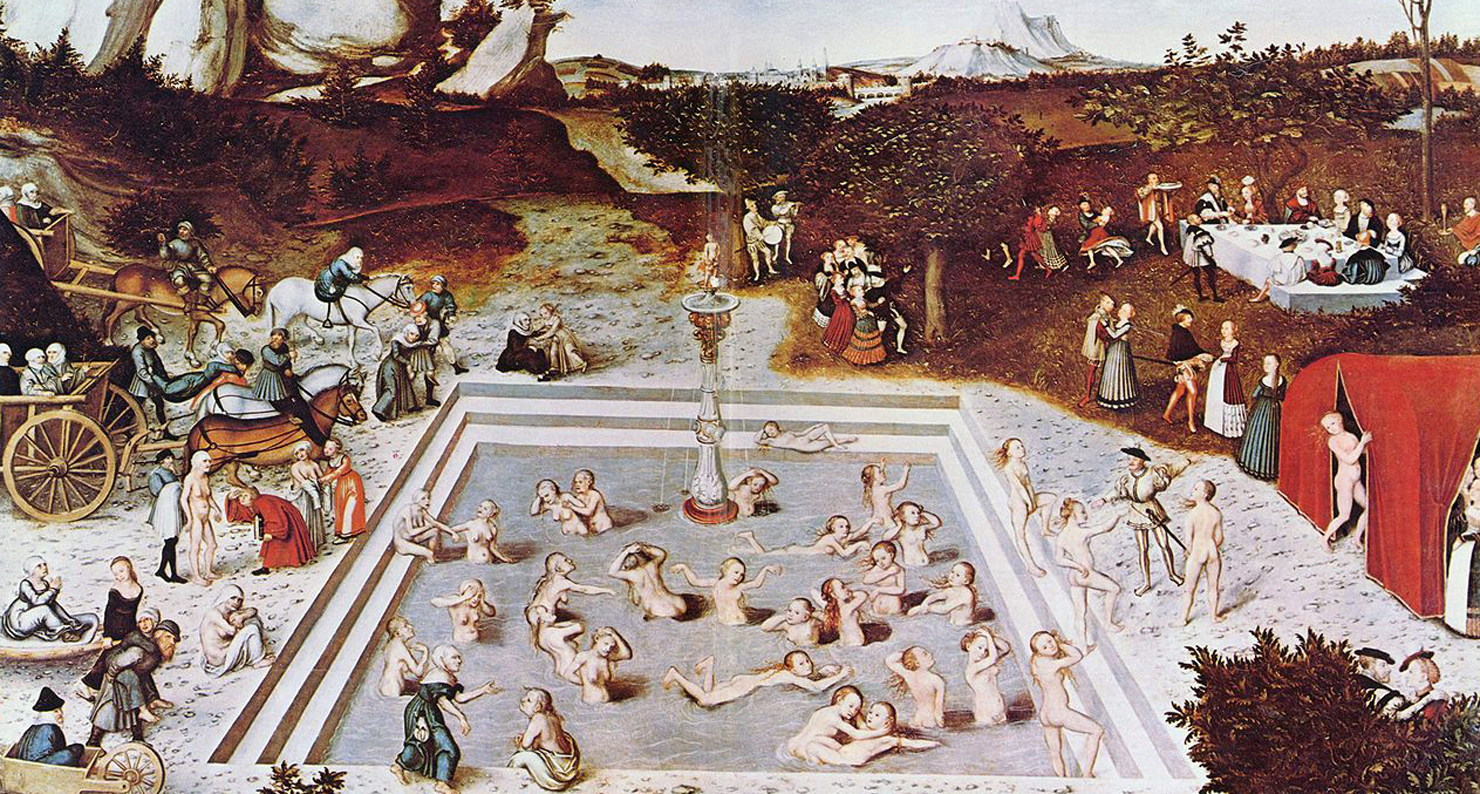 The Fountain of Youth, by Lucas Cranach the Elder, 1546.

How one sets out to conquer death has everything to do with how one defines it. “We don’t get old, we rust from oxygen,” explains Dr. Harry B. Demopoulos, a researcher (and former actor) who studies ischemic injury, looking for methods to mitigate cellular damage caused by a restriction in blood supply. A Spaniard of the sixteenth century might put more stock in the Fountain of Youth, that mythic baptismal curative.

Then there’s nineteenth-century politician and eccentric Leonard “Live-Forever” Jones, a Kentuckian who ran for president in every election from the 1840s through 1868 on a platform that held extinction to be preventable via prayer and fasting. Jones died at seventy-one of pneumonia, refusing treatment for what he insisted was a purely moral disease. Jones’ idea of deathlessness had been transmitted from an itinerant minister named McDaniel, at whose funeral he was embarrassingly obliged to speak; they had planned to build a city without graveyards.

Whether it’s a quest for the Holy Grail or dominion over our DNA, capital remains a common ingredient. Jones’ political campaigns were financed by a fortune made in land speculation; Demopoulos requires funds to continue his research; the Age of Exploration drew from royal coffers. So is it any surprise that in the ugly throes of late capitalism, giant corporations aim to solve this riddle? Last month, Google CEO Larry Page announced the founding of Calico, “a new company that will focus on health and well-being,” with the implicit aim of radically lengthening human life.

Forget about curing this or that disease, Page said in an interview with Time magazine, noting that “if you solve cancer, you’d add about three years to people’s average life expectancy.” Better to find some mythic, universal fix. Once again, the project of dismantling existential borders emerges from the alignment of technology (however one defines it), dollars, entitlement and irrational optimism—manifest destiny, you might say. The notion that it’s our duty to surpass the physical self complements the canards of abundance and exception that plague an (over)ambitious mind. Who’d be willing to quit consciousness when it offers elite and conspicuous pleasure?

That utopian delusion forms the basis of a new faith, if not a splinter sect of the capitalist cabal: faith in a lottery whereby some generation will know eternal bliss, which is no less than they deserve. A faith, moreover, that the systems already in place—a globalized market, western hegemony, brutally separate social strata—will produce the conditions for our self-made salvation. Bleeding Edge, Thomas Pynchon’s latest, criticizes this near-mystic outlook and faulty assumption of perpetual growth as two characters discuss the illusion-shattering 9/11 attacks in close aftermath:

“The Trade Center towers were religious too. They stood for what this country worships above everything else, the market, always the holy fuckin market.”

“It’s not a religion? These are people who believe the Invisible Hand of the Market runs everything. They fight holy wars against competing religions like Marxism. Against all evidence that the world is finite, this blind faith that resources will never run out, profits will go on increasing forever, just like the world’s population—more cheap labor, more addicted consumers.”

Belief in approaching immortality, like a belief in the Rapture, becomes ideology, a single-issue political party. Ray Kurzweil (inventor, futurist, Google’s chief of engineering) is interested in medical advances designed to treat aging, ways of “outrunning” death, which in a kindly spin on Burgess’ solipsism he describes as the loss of knowledge, memory, and experience; the loss, indeed, of entire worlds. Following that train of thought, he imagines the infinite spread of cognition, enabled by the technological singularity—that moment when artificial intelligence outstrips ours, takes over the process of enhancement, and conveniently solves all our problems, too. If biology ends us by severing the senses, he says, we’ll have to merge with machines.

The ability to “upload” your mind to a network or piece of hardware is beloved in the realm of science fiction, which is where, for now, it remains. Plenty of Kurzweil’s colleagues have taken him to task for his pie-eyed predictions, but he stands as firmly behind them as any zealot would. He’s convinced the singularity will occur in his lifetime and change society for the better, allowing him to live forever. In order to greet his destiny, he fiercely monitors his genetically compromised health, popping hundreds of supplement pills a day. If he dies before the necessary advances are made, he will be vitrified in liquid nitrogen by the cryonics company Alcor Life Extension Foundation, to be downloaded or thawed out later. This is nothing short of the new afterlife.

More open about its religious bent is the 2045 Initiative, established by Russian oligarch Dmitry Itskov—another billionaire heavily invested in cheating death—which aims to achieve “the transfer of an individual’s personality to a more advanced non-biological carrier” and, in the final stages, a hologram-like proxy. The organization hosts interfaith talks and boasts of an endorsement—a blessing, that is—from the Dalai Lama. Meanwhile, the Immortality Project, a think tank at the University of California, Riverside, probes the question of “whether it is in some sense irrational to desire immortality.”

That question has the ring of common sense. It’s well worth noting that even as we pursue these new frontiers in research, we harbor an inborn revulsion toward “unnaturally” prolonged life: from do-not-resuscitate orders to horror films about various undead, avatars for endless, thoughtless consumption and want. Zombies and vampires, creatures sustained by unspeakable parasitic means: they’re us without the luxury of finitude. George Romero’s Night of the Living Dead franchise makes the link between modern economics and the supernatural threat a key subtext, but this goes back to Bram Stoker and Marx himself, who invoked Gothic terrors to describe capitalism, a vampiric entity or sometimes a “were-wolf” that “oversteps not only the moral, but even the merely physical maximum bounds of the working day. It usurps the time for growth, development, and healthy maintenance of the body.” In other words, it doesn’t obey any rational limits.

That critique resurfaces in the low-budget sci-fi movie Moon, in which the single on-site employee of a corporate lunar mine turns out to be company property, the licensed genetic material of an astronaut living comfortably on earth. The clone thinks he’s on a three-year contract, but really that’s how long it will take for his tissues and organs to break down, at which point a replacement clone is woken, and the corporation—echo of “corpse” right there in the word, enterprise built on a sacrificed body—continues to show a profit. After all, it’s cheaper to keep staff on than hire and train someone else.

Michel Houellebecq’s speculative novel The Possibility of an Island touches on a similar chord, but in his version there is no industry to which benefit accrues: the nouveaux riches pour their surplus wealth into the long-shot research of a charismatic biotech guru and attain a meaningless sort of immortality in the guise of structurally modified neo-humans, suspended as an unintelligible life-story passed from one blank clone to the next. Each clone in turn absorbs its baffling history, wiles away some years in a private, sterile habitat, and comes to accept its own disintegration. It takes centuries for a “copy” of the long-dead protagonist to realize that mere succession holds no value, for the copies or the copied. They’re still the idle rich, living just to live, blind to their insignificance.

Compare Stoker’s Dracula, a feudalist lord sitting atop a mountain of gold—dead capital that had “lain long in the ground” but will serve as startup money for the Count’s move to London, multiple shadowy real estate deals, and subsequent new world order. The book hardly needs mention that should this ageless aristocrat come to power, we mortals would play the part of slaves and cattle, fit only to be sucked of essence, thereby extending his reign. As the critic Franco Morretti points out, Dracula actually bleeds cash when Jonathan Harker slashes at him with a knife—suffering the exposure of newly liquid assets crucial to his megalomaniac plans:

As it was, the point just cut the cloth of his coat, making a wide gap whence a bundle of banknotes and a stream of gold fell out. The expression on the Count’s face was so hellish…It would be impossible to describe the expression of hate and baffled malignity…The next instant, with a sinuous dive he swept under Harker’s arm, ere his blow could fall, and, grasping a handful of money from the floor, dashed across the room, and threw himself at the window.

Another failed entrepreneur, it seems. And yet the pro-immortality crowd would consider his aims antithetical to theirs. For them, permanent life is more than a selfish daydream; it’s a stepping-stone on our fated path of accelerating creativity, that godlike quality which will ultimately make us gods. In Thomas Frank’s incisive takedown of TED Talks, those qualities appear themselves the focus of cultish and shallow reverence. The stuff of TED Talks is “not science,” despite a “technological gloss,” but a “literature of superstition, in which everything always worked out and the good guys always triumphed and the right inventions always came along in the nick of time.” Sound familiar? When people like Kurzweil and Itskov speak of the normal human terminus, they make it sound like an insult, something we have the means and motivation to correct—so what’s stopping us? Just skepticism.

Ernest Becker’s 1973 Pulitzer Prize–winning work The Denial of Death charted this same narrative: civilization allows us to feign ignorance of mortality through embarking on a “heroism project,” some work with the whiff of eternity; the people who fail to identify this ennobling and distracting purpose will suffer. But often what we want to last forever, as with Dracula and the zombies, is our own strange way of life. Spotless fantasy easily flows from the narcissistic proposal that we were not meant to sleep the big sleep: it’ll never be “our time,” because we’ll build a different clock, change the rules, go beyond what we’ve been given. In this scripture, heaven’s merely a better bodily shell, the Freudian ego-ideal we won’t need to measure ourselves against because we’ll somehow be it.

Everyone knows decay has a purpose. An old chestnut in the biology classroom is that programmed cell death while we gestate in the womb is what gives us spaces between our fingers and toes. More elegantly: death is what gives life shape. The question of immortality is controversial because not only do we fail to envision how it might really occur, we cannot agree on the parameters in which it would. Does it rely on metaphysical reincarnation, or digital rebirth? Are there answers in long-living animals that display “negligible senescence,” or stunted humans who lack “developmental inertia”? Do we seek cells that can perpetually divide without error, or the total abandonment of cells? Perhaps if we keep busy, looking under every rock for a clue, and pass the search down to our children, that will prove satisfaction enough.

But for the most successful of us, nothing but success will do.