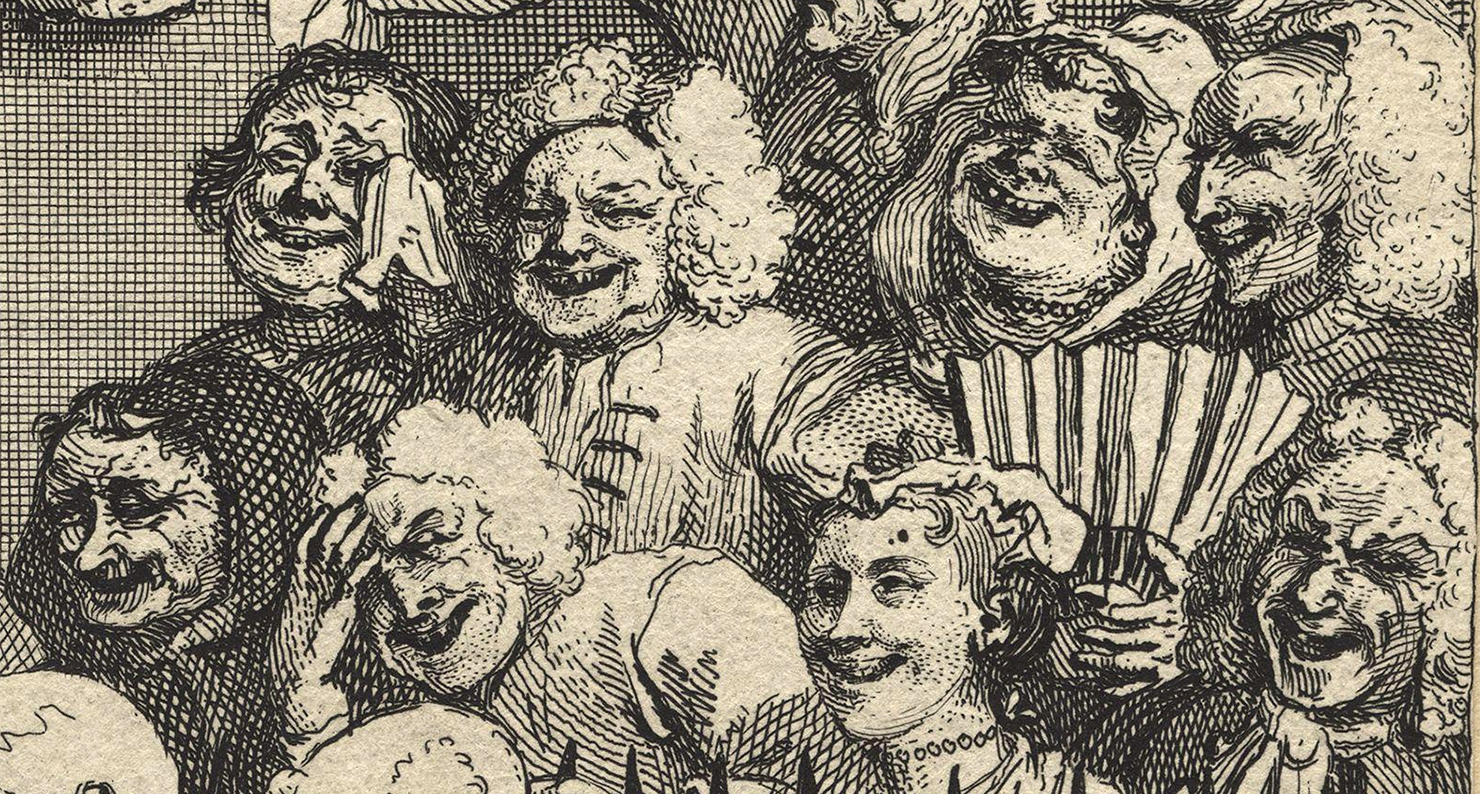 My fifth-grade classmates and I had gone too far. We’d become wild, ungovernable, and our teacher was sick of yelling. She yelled anyway, but when she was done, she made us take out pieces of paper and write down what we felt when routine misbehavior led to these anguished disciplinary interludes. I must have written something suitably contrite—“I get frustrated because we should be learning”—but I can’t quite recall, given what happened next. Our teacher collected the anonymous replies and began to read them aloud, one shame-choked apology after another, until her eyes flitted across a sentence that made her breath catch in fury. Tears of rage spilled over as she hatefully spoke each word: “It makes me feel laughy because it is funny.”

Reader, I could have died on the spot. Of sheer mania. The “church giggles” phenomenon is universal, but I count myself unusually prone to inopportune, top-volume, unmistakably-me laughter. I am quick to dissolve in guffaws and slow to revive from major crack-ups. Friends in comedy and theater always know when I’m in the crowd, no matter how dim and packed the venue. So I don’t exaggerate when I say that not being able to laugh at this classroom confession felt like a fatal paroxysm.

Then again, giving voice to the laughter could be what kills you. Around the same age, I was traumatized by a sequence in Who Framed Roger Rabbit? where a crew of gangster weasels laugh themselves to death at the clownish antics of P.I. Eddie Valiant, with Roger offering inevitable encouragement: “You’re slayin’ them! You’re knockin’ them dead!” It’s not that the animated throes are gruesome—it’s how possible that demise would seem, how close death feels when we’re gasping for air, having heard “the funniest thing.”

As it so happens, people do drop dead of laughter. In 1989, Danish physician Ole Bentzen expired from a heart attack brought about by a scene from the film A Fish Called Wanda in which Kevin Kline shoves french fries up Michael Palin’s nose. Apparently, it reminded him of a time when his family had put cauliflower up their noses at the dinner table. As he laughed uncontrollably, his pulse escalated to somewhere between 250 and 500 beats per minute. A similar heart attack, or perhaps asphyxiation, is probably what killed Damnoen Saen-um, an ice cream truck driver from Bangkok, whose wife attempted to rouse him as he laughed in his sleep until he stopped breathing. As someone likewise given to somnolent bouts of good cheer, I cannot help but fear for my own safety in slumber.

Just because cases like these can often be blamed upon cardiac defects doesn’t mean we can untangle laughter and death. They register as opposing forces, even when they conspire toward a single effect: “gallows humor,” in the original sense of a joke one tells before being executed. And harnessing the subversive, destructive form of laughter has long furnished the world with cultural weaponry—Swiftian satire comes to mind, as well as Charlie Chaplin’s The Great Dictator and Ernst Lubitsch’s To Be or Not to Be, films that made light of Hitler when he posed an existential threat. Stanley Kubrick’s Dr. Strangelove snickered at nuclear annihilation. Heir to those audacious works is 2010’s Four Lions, which follows a British sleeper cell of would-be jihadis as they plan and bungle a suicide attack during the London Marathon, a darkly hilarious, violent farce that nonetheless anticipated the horrific bombing in Boston three years later.

But well before Tamerlan and Dzhokhar Tsarnaev had begun to hatch their American plot, it became an unspoken rule in the Western world that terrorism is not a topic for comedy. The giddy thrills of Four Lions derive from watching it in the wake of 9/11 and the 2005 attack on the London Underground, an era in which we are not permitted to identify the bitter ironies of such appalling events, nor lampoon their architects in a way that acknowledges their humanity and humiliation—both of which the film does. Tracing the ideological threads that braided to form Al Qaeda in his book The Looming Tower, Lawrence Wright makes a special note of humiliation, “the essence of torture,” as key to “understanding the radical Islamists’ rage.” A large part of being humiliated, of course, is the sense that everyone’s laughing at you.

Perhaps that’s why it’s not unusual to read about laughter provoking murderous response. Last year, a California jury convicted Ronald Eugene Murray II for the voluntary manslaughter of middle-aged businessman Mun Jang; both had been at a deli in the wee hours of the morning, and the latter laughed “when the pastrami fell out of [Murray’s] sandwich” onto the floor. Murray sucker-punched Jang and then kicked him so hard in the head he died two days later. The two had not known each other—their first interaction was Murray asking, “Who you laughing at?” In fact, witnesses said, Murray’s anger was initially directed at the counter employees who refused him another sandwich at discount. He chose to lash out at random.

What can this be but the end result of institutionalized shame and mockery? Murray’s crime instantly recalls an iconic scene in Goodfellas that slides from social bliss to high stakes as Joe Pesci’s Tommy DeVito takes exception to a remark from Ray Liotta’s Henry Hill, sounding like a child who has been bullied to his breaking point.

Tommy DeVito: What do you mean I'm funny?

Tommy DeVito: What do you mean, you mean the way I talk? What?

Henry Hill: It's just, you know. You're just funny, it's ... funny, the way you tell the story and everything.

Hill’s inability to articulate himself and DeVito’s insistence compound the tension until, in a maneuver we all recognize from life, they defuse the standoff by pretending that the sour turn was itself the joke. In fact, Martin Scorcese had allowed the pair to improvise dialogue based on an anecdote told by Pesci, in which he had genuinely offended a mobster with a comment about how funny he was. His no doubt paralyzing shock at that reaction is manifested on the faces of his fellow actors here: while shooting this exchange, they had no idea where it might be going.We see the connection between mortality and ridicule in the earliest example of pathological laughter. Zeuxis, a Greek painter of the fifth century BC, is said to have died cackling at his depiction of a wealthy old patron as Aphrodite, lethally amused by the absurd vanity of her commission. In another light, however, this is one more laughing death where nothing is funny at all. Consider the philosopher Chrysippus, who is supposed to have howled himself into oblivion watching a drunk donkey eat figs. Or consider Mrs. Fitzherber of Northamptonshire, who in 1782 had to leave a production of The Beggar's Opera when she could not contain her mirth at the entrance of an actor in drag. Days later, Gentleman's Magazine reported that, unable “to banish the figure from her memory, she was thrown into hysterics, which continued without intermission until she expired on Friday morning.” The performance had taken place Wednesday night.

The possession laughter takes of our bodies is so arbitrary as to discredit whatever argument we’d like to make about its nature. Ceaseless fits of it can be classified as “sham mirth,” a symptom of organic cerebral disease and a handful of psychoses (thus the unhinged laugh of the popular supervillain), but the neurotypical want to fill space with laughter too. We prefer to see comedies with a group of strangers, to manufacture waves of approving noise. I’ve been scolded for turning to laugh in my neighbor’s ear, as if needing to transmit the joy. When you find something funny and the other person doesn’t, you can’t imagine why. If you can, it indicates embarrassment about your own sense of humor—it’s juvenile, debased.

Which is why the laugh track comes in handy: it excuses your own bad taste, paving the way for acquiescent stupor. When single-camera sitcoms like Arrested Development and The Office came into vogue in the mid-aughts, the elimination of the laugh track was as much an ideological choice as a practical one—it compliments the audience’s intelligence by acknowledging that they will know when to laugh. So how is it that for decades we were comforted by a simulation of mass euphoria that ends up sounding lonely and haunted? Laughter is not meant to be recorded; it’s too spontaneous, ephemeral. It must be allowed to fade. Otherwise we are sacrificed to it. The chasm is starkly illuminated in the film Carrie, where the crucible of humiliation at first admits no sound. Cruel laughter only sinks in when Carrie remembers her domineering mother’s warning about attempts at teen assimilation: “They’re all gonna laugh at you!”

Is it any wonder that we secretly view laughter as black magic, unpredictably hazardous? Only when you hear the common evolutionary explanation for laughter: it serves to express relief. Yes, that’s what it would have been to laugh on that afternoon in fifth grade—relief. Not just from the urge to laugh, but from some awful danger, a cosmic threat imagined by and for myself. Thankfully, the dread doesn’t last, which brings us to another paradox: laughter is baffling, but we’re never confused when we laugh. We understand it as it happens, not before or after. “You had to be there,” we sadly tell the friends who weren’t, and cannot grasp the situation, because we cannot properly explain it, or why it had us in stitches. The laughter alone will have to do.