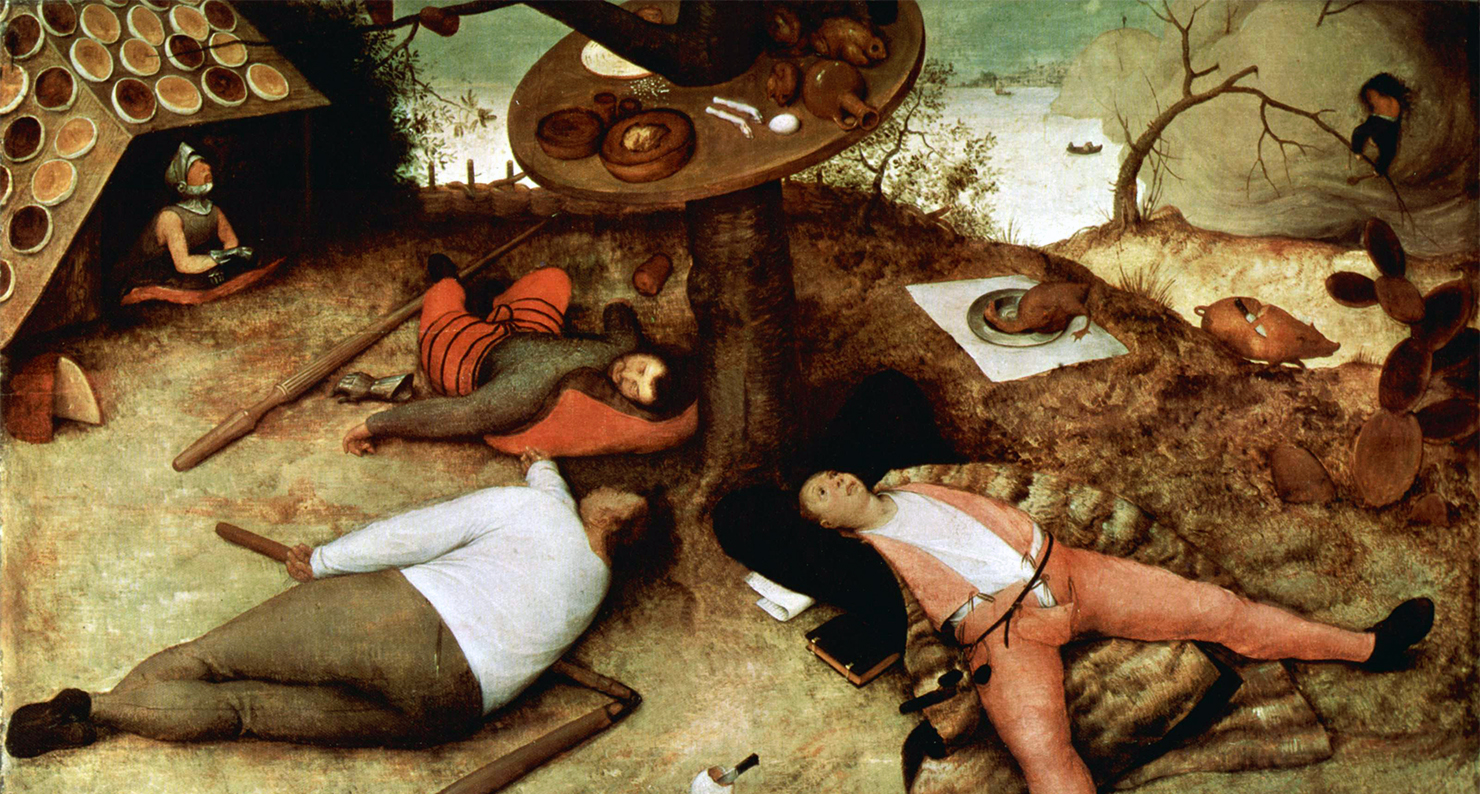 The Land of Cockaigne, by Pieter Bruegel the Elder, 1567. Alte Pinakothek, Munich.

For the discerning caveman, the focus required to not die from ingesting the wrong thing—a leaf, a berry, a bug—must have absorbed considerable attention. As any wild plant expert would likely tell you, a case of mistaken botanical identity can be fatal; confuse poison hemlock for a wild carrot and it will probably be the last thing you do. Thankfully, the spread of agriculture and the emergence of cultivation soothed many of these fears, so that by the Renaissance the question of what was poisonous came to be chiefly the concern of medicine, where healing often came down to trial-and-error by toxicology. “What is there that is not poison?” once remarked the sixteenth-century physician Paracelsus. “All things are poison, and nothing is without poison: the dose alone makes a thing not poison.”

Paracelsus’ advice on proper measurement has never ceased being a matter of importance to us—the modern truism “the dose makes the poison” is derived from him. But according to LSD users in the 1960s, the dose made the “trip.” Here, finally, was a poison that didn’t kill you, but instead seemed to expose the very core of existence. “There is no lethal dose known of LSD,” insisted the drug’s charismatic mascot Timothy Leary. The allure of nonlethal “acid” surely frustrated anti-drug advocates, who countered with a volley of myopic public service announcements spotlighting LSD’s potential to induce a mind-altering “bad trip.” Had they consulted the historical record, however, public health experts might have also revealed the drug’s dangerous botanical origins: Lysergic acid diethylamide is derived from ergot, a deadly fungus whose “bad trips” killed countless numbers of people during the Middle Ages and beyond.

Ergot is the name given to a specific form of Claviceps purpurea, a parasitic European fungus. A purple, talon-like outgrowth, it is commonly found issuing from the ear of rye grains and, to a lesser extent, related cereals like wheat and barley. The French thought it was redolent of a rooster’s spur—hence its name, which is descended from “argot,” the Old French term for a cockspur. Each of these ergot kernels contains a number of alkaloids harmful to humans and animals. When ergot-infected grain is milled into flour and consumed, a host of troubles arise: convulsions and seizures, vivid hallucinations often of demons or animals, a restriction of blood flow to the extremities followed by a falling-off of gangrenous limbs. In many cases the hallucinations seize upon actual prickling or burning sensations arising from the loss of blood flow, leading the sufferer to believe he is crawling with insects or engulfed in flames.

Among the few passing mentions of ergot in antiquity is from an Assyrian tablet, dated to around 660 bc, that warns of a “noxious pustule in the ear of grain.” More explicative accounts wouldn’t appear until the Middle Ages, however, when historians began chronicling a spate of bizarre epidemics, which they called ignis sacer (“holy fire”). Mezeray describes a gruesome outbreak in 994 in the south of France that swept away nearly 40,000 people:

And when a plague of invisible fire broke out, cutting off limbs from the body and consuming many in a single night, the sufferers thronged to the churches and invoked the help of the Saints. The cries of those in pain and the shedding of burned-up limbs alike excited pity; the stench of rotten flesh was unbearable.

Sigebert of Gembloux witnessed in 1089 a similar malady afflicting the people of Lorraine that “caused their limbs to become as black as coal, and from which the patients died miserably, or were reduced to an unhappy life, having lost hands and feet.” Another “plague of fire” near Paris forced victims to seek recourse in a church of St. Mary. A good many were cured, presumably owing to the church’s ergot-free stores of grain. Unfortunately, upon returning home to their contaminated crops they suffered a relapse of their condition, consigning them once more to the church.

Some held that the burning affliction was a divine punishment requiring divine intervention. In 1093, a monastic order was founded to care for the beleaguered victims of ergotism. The confraternity chose as its patron St. Anthony of Egypt, venerated for his legendary sufferings—during his protracted struggle in the desert with Satan, the poor hermit was regularly tormented by malevolent visions. The disease thereafter took on the name St. Anthony’s Fire and sufferers flocked to the order’s monasteries, which were signified by detached gangrenous limbs hanging above the entrances. (Limbs were a common motif of ergotism in art as well; Hieronymus Bosch placed a severed foot among the shambolic unfortunates in his triptych The Temptation of St. Anthony.) Some of these hospices even claimed to store collections of mummified limbs for victims to retrieve on the Last Judgment. St. Anthony’s Fire would continue to cast a pall over Europe until the late eighteenth century, when scientific sleuthing finally pointed the finger at spurred rye.

The pernicious fungus was little more than a historical footnote when a sudden recurrence in 1951 unexpectedly launched it into headlines worldwide. Doctors in the small town of Pont-Saint-Esprit, France, had initially been summoned to treat a few patients with indefinite symptoms: nausea, chills, pains, burning sensations. Soon, more townsfolk succumbed to the illness, including the advent of frightful hallucinations. Within weeks the village was gripped by a mad panic: a 68-year-old woman threw herself from a third-floor window to escape the flames she believed to be enveloping her; another man barricaded himself inside his home with a gun, ready to shoot a monster that was stalking him; a third man screamed, “My head is on fire! There are snakes in my belly!” and attempted to throw himself into the Rhone; still another believed “bandits with donkey ears” to be chasing him. By the time it was over, four people were dead and over two hundred more had been made ill. Around twenty-five of these had been placed in straitjackets and institutionalized.

The eruption of the disease, which had mostly lain dormant for centuries, must have seemed like traveling back in time—if a medieval ergotism outbreak could unfold over daily news headlines—only this time nobody suspected the work of divine agency. The poisoning was initially rumored to be the plot of some “unknown criminal,” but the real culprit was confirmed later by autopsies performed on two of the victims and reported in the British Medical Journal. Following the revelation, newspapers dubbed the cause of the incident as le pain maudit, the cursed bread. One headline read, “St. Anthony’s Fire May Have Taken Last Victims.” Less than three weeks after symptoms first appeared, the New York Times reported that a miller and a baker had been charged with involuntary homicide. Bread—perhaps the most salient thread in the fabric of French society—had been fouled. A Parisian newspaper was left wondering: “The baker whom we visit every day, the grocer we go to regularly, are they not, after all, maniacs or potential killers of whom we must beware?”

Meanwhile, a cadre of scientists at Sandoz Pharmaceuticals were following the incident at Pont-Saint-Esprit with interest, as the Swiss drug company had isolated a dozen ergot alkaloids to be used as remedial agents. (Sandoz was also implicated in a nebulous 2011 claim that the Pont-Saint-Esprit bread had been laced with LSD by the CIA.) In particular, the alkaloid ergonovine had garnered attention for its ability to precipitate childbirth in cases of lingering labor. (The heath benefits of ergot were a long held, but little-known fact; for centuries, ancient “wise women” used it as a nostrum for women in labor, compelling Arabic and European scholars of later eras to report similar findings.) Another alkaloid, the vasoconstrictor ergotamine that causes gangrene, had also been isolated and marketed by the company for use in alleviating postpartum hemorrhaging, and as a migraine remedy.

With these and other ergot discoveries in the Sandoz lab, it was in 1938 that a budding company chemist named Albert Hofmann, fiddling with lysergic acid alkaloids in ergot, lit upon a curious new compound: lysergic acid diethylamide. Early research noted restlessness in the experimental animals, but nothing else of interest, and the study was quickly shelved. Five years later, however, Hofmann felt an inexplicable urge to reinvestigate lysergic acid diethylamide. Exactly how the young researcher was first exposed to its effects is unclear—perhaps a soupçon of the chemical had been on his finger when he rubbed his eye—but the “not unpleasant intoxicated-like condition” he later described from that day would not long remain a secret:

Last Friday, April 16, 1943, I was forced to interrupt my work in the laboratory in the middle of the afternoon and proceed home, being affected by a remarkable restlessness, combined with a slight dizziness. At home I lay down and sank into a not unpleasant intoxicated-like condition, characterized by an extremely stimulated imagination. In a dreamlike state, with eyes closed (I found the daylight to be unpleasantly glaring), I perceived an uninterrupted stream of fantastic pictures, extraordinary shapes with intense, kaleidoscopic play of colors. After some two hours, this condition faded away.

Hofmann spent much of his life fascinated by ergot and LSD (which he would often repine was his “problem child”), and in later years he claimed in a book that the hallucinogenic brew imbibed during the Eleusinian Mysteries in ancient Greece likely contained ergot. In 1976, a behavioral psychologist argued that the fungus was involved in the Salem witch trials, provoking scores of lengthy, heated debates in academic and mainstream publications. Ergotism was also suspected (with little evidence) to be the cause of tarantism, a hysterical dancing disease primarily affecting Germany during the sixteenth century. But for whatever its past sins, the fungus exists in our modern world primarily as a valuable storehouse for remedies—and as the origin of an illicit pleasure. “Who despises poison, knows not what is in the poison,” wrote Paracelsus, as a caution to those who would denigrate nature’s harmful materials.

Laurent Merceron is a former senior editor at Lapham’s Quarterly.