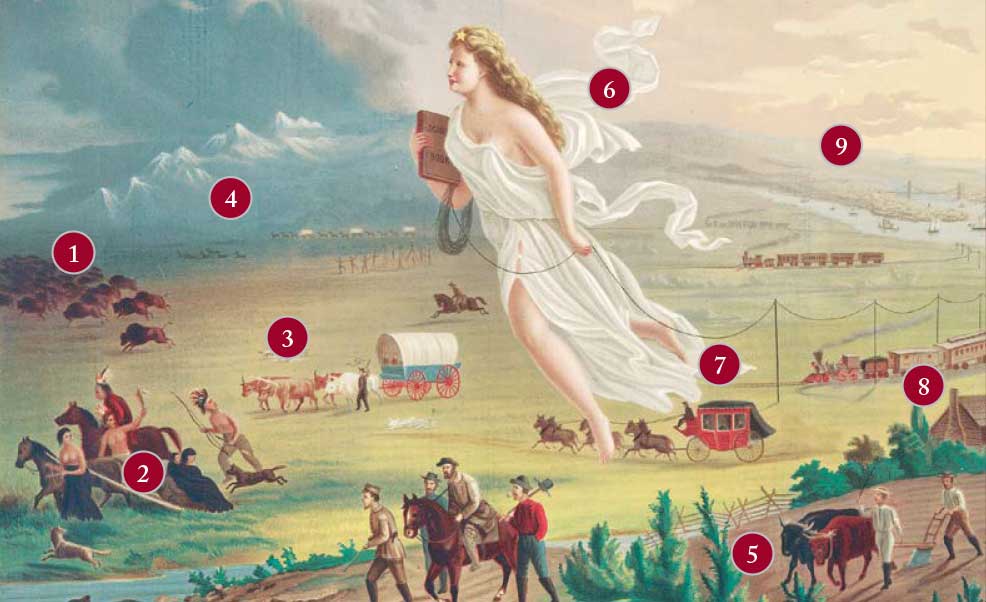 In 1872 publisher George Crofutt commissioned the painting American Progress by Brooklyn-based artist John Gast as a frontispiece for his guidebook to the American West. Full-color prints were also made available to subscribers to his magazine, Crofutt’s Western World. “Is there a home,” Crofutt wrote in an advertisement, “that can afford to be without this great national picture, which illustrates in the most artistic manner all the gigantic results of American brains and hands?”

1 By 1889 fewer than a thousand plains bison were left in North America, down from an estimated fifty million when Europeans first arrived. Buffalo Bill Cody single-handedly killed 4,280 bison in one year.

2 Plains Indian tribes were decimated by a series of cholera outbreaks that spread from the pioneer trails. “We were sorry later,” one Kiowa said, “that we permitted the travelers to go through the plains.”

3 Nicknamed the prairie schooner for the resemblance of its white canvas top to a ship’s sail, the covered wagon used by pioneers was pulled by a team of oxen at a pace of about fifteen miles per day.

4 In May 1843 a wagon train of around a thousand settlers left Independence, Missouri, arriving in the Willamette Valley six months later. By 1860 an estimated 53,000 pioneers had followed in their footsteps along the Oregon Trail.

5 The Homestead Act of 1862 granted up to 160 acres of western land to any U.S. citizen who lived on and improved the plot for a period of five years. By 1904 more than a hundred million acres had been allotted under the scheme.

6 The allegory of Columbia, a personification of the United States, carries a schoolbook in her right hand. In her left she lays a telegraph wire, a reference to the completion of the first transcontinental telegraph line in 1861.

7 Carrying mail and news across the continent in eight to ten days, the Pony Express was launched in April 1860. It closed the following year, two days after the inauguration of the transcontinental telegraph.

9 At the time of Gast’s painting, New York City, visible in the upper right corner, had a population of 950,000, up from 300,000 when wagon trains had begun traveling the Oregon Trail three decades earlier.