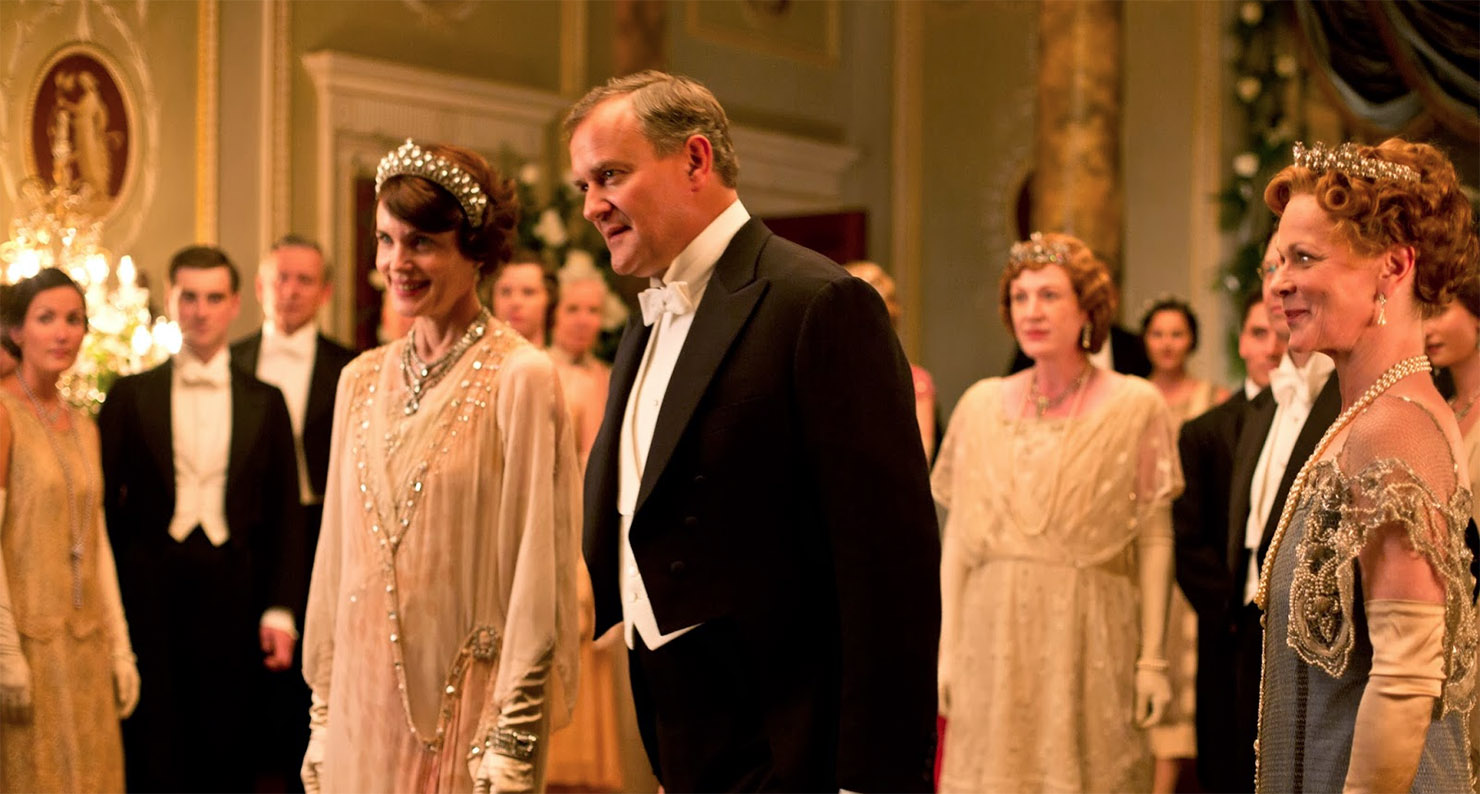 Lord and Lady Grantham at their London house in the fourth season of Downton Abbey.

The beginning of the fifth season of Downton Abbey features a incident in which rapacious aristocrat Lady Anstruther stalks and seduces first footman James, causing his dismissal. In the same episode, the usually proper Viscount Gillingham openly propositions Lady Mary, suggesting they enjoy the pleasures of marriage without walking down the aisle. This evidence of passion among young people in 1924 causes me to wonder about the couple at the top, Lord and Lady Grantham. Despite the lord’s brief season-two kiss with a parlormaid, it’s hard to imagine that in their thirty-four-year marriage either of them has engaged in anything salacious with anyone besides each other.

When Robert Crawley and Cora Levinson married in 1890, fidelity in an English aristocratic marriage was not a given. Most matches had a sound practical basis: heirs to great titles and estates were introduced to a pool of appropriate mates during the London season. Some women were appropriately titled, others—like the fictional Lady Cora and her real-life counterpart Mary Leiter, daughter of a Chicago department store magnate who would marry Lord Curzon—were appropriately rich. Girls making their debuts were virgins with excellent social connections. Men made their selections based on a combination of beauty and fortune. After the wedding, chaperonage ceased, newlyweds got pregnant and produced heirs. Once done with the business of childbirth—one male heir was essential, but a spare was highly desirable—a wife had fulfilled most of her marital purpose. The rest of it—running her husband’s house, managing the servants, entertaining, looking presentable— left titled ladies with a great deal of free time.

Meanwhile, aristocratic men, having insured succession of the title, were under no further conjugal obligation save that of keeping up appearances. The high-born understood they were supposed to set an example to the lower orders. Base behavior like gambling or infidelity might occur but it was expected never to come to the public’s attention.

So there was a system, a tacit set of rules that let everyone have fun without shocking the plebeians. The unspoken approval for this way of life came right from the top—Prince Albert Edward of Wales, later Edward VII, who lent his name to the era. The prince, who served as the ultimate director of high society, was an inveterate womanizer. Some of his reported paramours included actress Lillie Langtry and society hostess Alice Keppel, who, through one of her daughters, is the great-grandmother of Camilla, Duchess of Cornwall.

The following are some of the guiding principles of the Edwardian age:

Leave virgins alone: Where marriages are made for advantage, bloodlines are essential. (The younger sisters of Downton, who would have been considered less important socially, committed small rebellions by becoming pregnant by an Irish driver and a married newspaper editor. Lady Mary, as the eldest daughter, was risking a full-scale war by allowing the ill-fated Mr. Pamuk to hop into bed with her.) Those heirs and spares had to be demonstrably legitimate, and produced as quickly as possible—Consuelo, Duchess of Marlborough, an American who was the eldest daughter of William Vanderbilt, was told by her husband’s grandmother that she really ought to have a son immediately, lest the line pass to the Churchill cousins and “that little upstart Winston becomes Duke.” Winston Churchill was also the son of an American, Jennie Jerome, one of the first girls to bring her money overseas in search of adventure and social advancement, and she and Churchill’s father married quickly after a whirlwind courtship, and young Winston was born seven and a half months later, a birth suspiciously remarked upon as “premature.”

Tea-time is fun time: It’s hard to do more than flirt at a ball or a banquet, but between four and six in the afternoon, society matrons relaxed in loose tea gowns, which didn’t require whalebone corsets. It was completely acceptable for a man to call on a married woman for tea, bringing his hat and walking-stick into the sitting room to indicate he did not intend to stay long. The lady of the house would dismiss the help and the coast was clear.

Fan the flame with words: The upper classes, perhaps not thinking about the permanence of ink, loved to detail their various affairs in private messages: chatty notes, thank-you notes, notes of assignation, love notes. It’s astonishing how few went astray, but when they did they could become social dynamite. They were even known to appear in court when marriages ended. Protocol at the end of an affair dictated the return of correspondence to the sender, though on the occasions when that didn’t happen, disaster could strike. In the late 1870s, the Churchill brothers threatened to expose love letters written by the Prince of Wales to a Lady Aylesford (both married, not to each other) unless he ended a quarrel he’d had with one of them.

Get out of town: Aristocratic husbands and wives did not typically sleep in the same room. (Lord and Lady Grantham are a notable exception, and are often shown falling asleep together.) Hostesses at the great country houses were used to facilitating corridor-creeping. In some houses, calling cards were slipped into metal frames in the bedroom door to identify occupants. A thoughtful hostess would put dallying couples next to each other. Some houses even featured a bell that rang an hour before morning tea came up. It wasn’t for servants, but to allow the gentry to get back into their own beds.

Carol Wallace has written or co-written twenty-one books and dozens of magazine articles. She was a co-author of The Official Preppy Handbook and To Marry an English Lord. The latter was, according to Julian Fellowes, one of the inspirations for Downton Abbey.