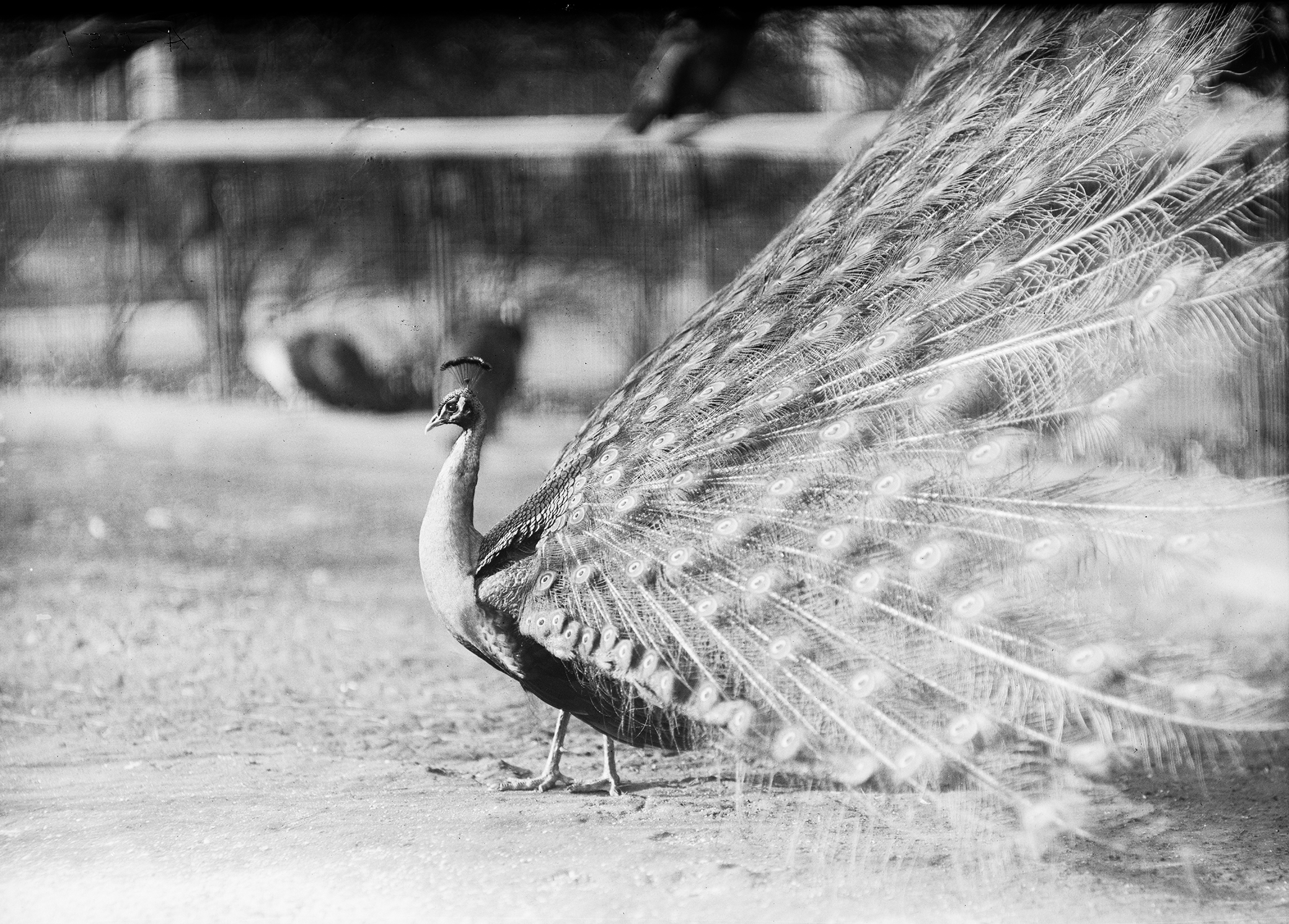 “My reading is botchy,” Flannery O’Connor wrote to a friend in February 1954. “I have what passes for an education in this day and time, but I am not deceived by it.” We aren’t fooled by her either: this writer read deeply and widely in her short life, both from books and the peacock-dotted landscape around her home in Milledgeville, Georgia. Below is a reading list compiled from her letters, essays, and the observations of those who studied her.

O’Connor found much to admire in a fellow writer of foreboding short stories, the Gilded Age assembler of intensely structured style-section copy to her composer of Southern police reports with liturgical time signatures. Henry James, whom she once called “a master of vulgarity,” appears frequently in her letters, in which she told friends what she had liked recently and what they wouldn’t. (Taste is carefully monitored and apportioned in these letters, a dance of shade and recommendation. One correspondent is known to enjoy Emily Brontë; O’Connor admits she’ll have to try reading Wuthering Heights to “see why it fascinates you so…I don’t know anything about her except she lived on the moor. I don’t know what a moor is but I should guess a piece of land that was desolate and damp.”) “I’ve read almost all of Henry James—from a sense of High Duty and because when I read James I feel like something is happening to me, in slow motion but happening nevertheless,” she told her longtime correspondent Hazel Elizabeth Hester in 1955, in a letter included in the collection The Habit of Being. Four years earlier she wrote a professor friend that she read James “thinking this may affect my writing for the better without my knowing how.” Her essay “Some Aspects of the Grotesque in Southern Fiction” begins by noting that “there is no literary orthodoxy that can be prescribed as settled for the fiction writer, not even that of Henry James, who balanced the elements of traditional realism and romance so admirably within each of his novels.”

Flannery O’Connor’s friends knew that bringing up the two in tandem would always be appreciated. Literary critic Caroline Gordon started off a review of O’Connor’s short-story collection A Good Man Is Hard to Find (1955)—friends writing about friends is an old fad—by saying that the stories “exhibit what Henry James, in ‘a partial portrait’ of Guy de Maupassant, called ‘the artful brevity of a master.’ ”

But James was by no means her greatest influence, even if his presence gilds a bibliography with a proper pedigree—or at least she was self-deprecating enough to downplay his effect. In the same 1955 letter (which doubles as a useful syllabus for an aspiring autodidact), O’Connor said that if she had the misfortune of regurgitating forebears in public, she intended “to look dark and mutter, ‘Henry James Henry James’—which will be the veriest lie, but no matter. I have not been influenced by the best people.” In practice she preferred avoiding such questions altogether, as she explained to Cecil Dawkins in 1958, recounting a time when an interviewer asked her to list her favorites from the canon.

I said I liked James and Conrad mighty well and in a minute she said, “And you said your favorite author was James Conrad, now…” If you do manage to say anything that makes sense, they put down the opposite.

When O’Connor needed a compelling fragrance, she went to the magazine rack, preferring eau de content to Chanel No. 5 and Shalimar. She asked Hester in June 1956:

Do you read the National Geographic or do you smell it? I smell it…It has a distinct unforgettable transcendent apotheotic (?) and very grave odor. Like no other mere magazine. If Time smelled like the Nat’l Geo. there would be some excuse for it being printed.

Besides the Greek and Roman myths found in The Book of Knowledge, a giant children’s encyclopedia set sold door-to-door across America, O’Connor said she mostly read junk as a kid: “Slop with a capital S.” But, as she told Hester in 1955, that era “was followed by the Edgar Allan Poe period which lasted for years and consisted chiefly in a volume called The Humorous Tales of E.A. Poe.”

These were mighty humorous—one about a young man who was too vain to wear his glasses and consequently married his grandmother by accident; another about a fine figure of a man who in his room removed wooden arms, wooden legs, hair piece, artificial teeth, voice box. etc. etc.; another about the inmates of a lunatic asylum who take over the establishment and run it to suit themselves.

For Flannery: A Life of Flannery O’Connor, Brad Gooch found her other childhood reads by looking at the flyleaves of her library. Little Men by Louisa May Alcott is “first rate,” according to her inside-the-cover review, while Alice in Wonderland was dismissed with a “I wouldn’t read this book.” Pinocchio was the worst novel of all—other terrible books would be graded in a curve slanted against its “terrifying” plot.

In 1948, O’Connor went to Yaddo, the artists’ retreat in Saratoga Springs, New York, a fifteen-minute drive from the cottage where Ulysses S. Grant finished his memoirs and died of cancer. She stayed until early 1949 (visits at Yaddo proceeded at a more leisurely pace back then, with some guests seemingly sticking around indefinitely), when Robert Lowell accused several people at the retreat of being communists, prompting a scandal and an FBI inquiry—and perhaps making the place less useful as a harbor of concentration for those only tangentially involved in the affair. It is unclear if O’Connor knew that Poe was rumored to have written part of “The Raven” while visiting Barhyte’s Tavern, which was once located on the Yaddo property. Or perhaps she wasn’t impressed: a tug-of-war of commemoration over Poe makes it seem possible that he wrote each line of the poem in a different location, all equally worthy of historical preservation.

Classics That Are Not Edgar Allan Poe

In the same letter where O’Connor mentions her love of Poe, she goes on to list other writers she got to know in that rush of reading that sometimes happens when ambitious twentysomethings leave their own settings and wonder what no one has told them about yet. In 1946 she moved to Iowa to attend the Writers’ Workshop, and there she started a curriculum that included her fellow Southerners (William Faulkner, Katherine Anne Porter, Eudora Welty), the Russians (Dostoevsky, Turgenev, Chekhov, and Gogol—but not Tolstoy), and the Catholics (Graham Greene, Evelyn Waugh, and François Mauriac).

When I went to Iowa I had never heard of Faulkner, Kafka, Joyce, much less read them. Then I began to read everything at once, so much so that I didn’t have the time I supposed to be influenced by any one writer…I read all the nuts like Djuna Barnes and Dorothy Richardson and Va. Woolf (unfair to the dear lady of course)…I have totally skipped such people as Dreiser, Anderson (except a few stories), and Thomas Wolfe.

In the end, they suffered from not including enough half-blind grandma-wedders: “But always the largest thing that looms up is The Humorous Tales of Edgar Allan Poe. I am sure he wrote them all while drunk too.”

“Hawthorne said he didn’t write novels, he wrote romances,” O’Connor wrote to William Sessions in 1960. “I am one of his descendants.”

A Little Bit of Franz Kafka

Readers saw Kafka in O’Connor’s words, but, as she wrote in February 1954, “I have never succeeded in making my way through The Castle or The Trial and wouldn’t pretend to know anything about Kafka.” But, O’Connor added, maybe just sampling Kafka is enough: “I think reading a little of him perhaps makes you a bolder writer.”

She added that she was “often embarrassed to find that I read the sources after I had written the book.” Or maybe influence is hard to find, at least when you’re looking at work that came out of your own mind: “I have one of those food-chopper brains that nothing comes out of the way it went in.”

A year later, O’Connor repeated her line on Kafka in another letter:

In her prayer journal, composed in 1946 and 1947 while she was in Iowa and published for the first time in 2017, O’Connor writes of one of those times when she tried again with Kafka. “I have been reading Mr. Kafka and I feel his problem of getting grace,” she wrote. “Please give me the necessary grace, oh Lord, and please don’t let it be as hard to get as Kafka made it.”

The Catcher in the Rye

O’Connor read J.D. Salinger’s book the same day it came in the mail, a one-afternoon sprint that left her mother warning it would “RUIN MY EYES.” Her mother said she might read it, too, but hadn’t yet; she prefers, Flannery wrote to Sally and Robert Fitzgerald in 1951, “books with Frank Buck and a lot of wild animals.” Regarding other contemporaries, Flannery recommended reading Robert Penn Warren’s All the King’s Men instead of Band of Angels. (The author taught at the Iowa Writers’ Workshop while she was there, and he co-edited a textbook, Understanding Fiction, that helped guide O’Connor’s early literature choices.) Her friend Elizabeth Hardwick was “a mighty good writer,” she told Dawkins. “She’s a big friend of Mary McCarthy and about the same vintage.” (In the same latter, while commenting on Katherine Anne Porter, she wrote that “people always suppose that there is rivalry between women writers. If so, I always figure they are not the best writers.”) Nelson Algren was a bad writer, she thought. Be patient with Catch-22, as it “gets funnier after page 36.”

If you come across a copy of The Fountainhead, Flannery offers this method of disposal, which she shared with playwright Maryat Lee in a May 1960 letter:

I hope you don’t have friends who recommend Ayn Rand to you. The fiction of Ayn Rand is as low as you can get re fiction. I hope you picked it up off the floor of the subway and threw it in the nearest garbage pail. She makes Mickey Spillane look like Dostoevsky.

For another writer’s syllabus, see “An Emily Dickinson Reading List.” A 1979 article in the Washington Post, published on what would have been O’Connor’s fifty-fourth birthday, mentions that she “compared the poetry of Emily Dickinson to the froth on a glass of Alka-Seltzer.”